Do BPSK vs QPSK have the same performance?

I'm trying to re-learn digital communication theory again and am creating a bit error probability simulation for various modulations. So far I've added BPSK, QPSK, and 8PSK and below is a plot that gets generated. 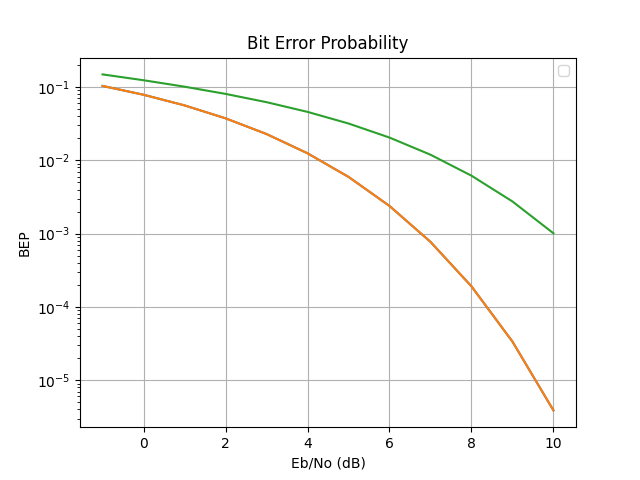 I noticed the BPSK and QPSK lines (orange) are on top of each other and the 8PSK line (green) is about what I would expect. The equations I am using are from the paper mentioned below. If this is really the case, why would it make sense to use BPSK when QPSK has the same performance?

Yes, they do have the same bit error rate (there are other ways to measure performance, though!)

All else being equal, there are few reasons to use BPSK instead of QPSK. Probably its main advantage in terms of system complexity is that it doesn't require a quadrature transceiver.

BPSK and QPSK have the same BER performance under additive white Gaussian noise only if the symbols are appropriately mapped to bits (such as Gray coding) since they can be viewed / treated as two independent BPSK signals that can share the same frequency due to their orthogonality (quadrature carrier). This is not true with higher order waveforms beyond QPSK such as 16-QAM, 8-PSK etc where we find that a greater SNR is needed to achieve the same BER, with the benefit of better spectral efficiency (more data in the same occupied bandwidth), and we see in these cases we no longer have complete orthogonality between the I and Q components in the waveform.

The biggest and primary advantage of QPSK over BPSK is spectral efficiency: for the same BER performance and data rate we can use half the bandwidth! This is also intuitively explained that we are sending two BPSK signals independently in the same bandwidth.

A common confusion when considering error rates between the two different constellations in the presence of noise is Symbol Error Rate vs Bit Error Rate. In the QPSK constellation the decision locations are $1/\sqrt{2}$ closer (1/2 in power units), leading one to possibly make the mistake that the QPSK system is more susceptible to noise (including phase noise and additive white Gaussian noise) but once you consider that the QPSK system is transmitting 2 bits for each symbol, the Bit Error Rate (not the Symbol Error Rate) is the same since with Gray coding only 1 bit error results at the threshold of error condition. (under higher SNR conditions where the noise isn't strong enough statistically to cause the double errors to occur).

This is illustrated below starting with the constellations of BPSK and QPSK with the QPSK constellation properly Gray coded, and then with the effects of AWGN (additive white Gaussian Noise) and Phase Noise separately. Note how AWGN contains both phase noise and amplitude noise components! The drawings show how the Symbol Error Rate would be larger (the noise distributions are $1/sqrt{2}$ closer in magnitude to the decision boundaries), but as long as we appropriately code the constellation points (Gray coding so that only one bit changes between closest symbols) such that only one bit error results, the Bit Error Rate will be the same. 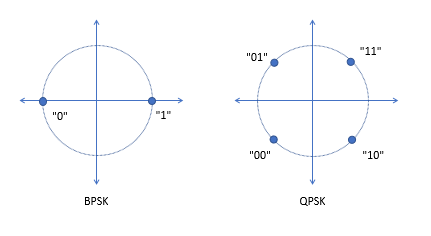 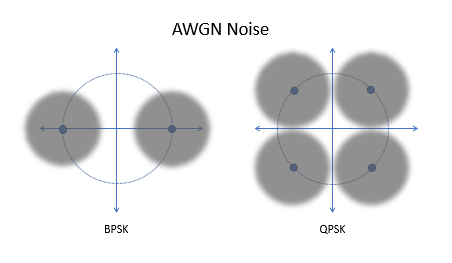 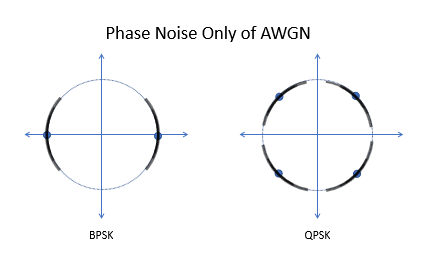 To avoid any confusion, the plots above depict noise with the same standard deviation in all cases. The noise as AWGN extends to infinity with increasingly smaller distribution so there will be errors in all cases (as given by the standard waterfall curves of SNR vs error rate for this).

You are analysing different modulation schemes under the assumption of perfect carrier recovery coherent demodulation. If your system has phase noise, BPSK will be superior to QPSK. Likewise QPSK will be more robust to phase noise than 8PSK.

Without implementing a carrier recovery loop, you can experiment the above by adding some phase noise into your system, on top of the white Gaussian noise.

Not the answer you're looking for? Browse other questions tagged digital-communications modulation qpsk bpsk performance or ask your own question.