A class of digital filters called Frequency Sampling Filters (FSF) has been mentioned in a side note by Richard Lyons in another related question comparing IIR digital filter design using mapping techniques. There is very little information on this technique available through a simple web-search (obscured by the "Frequency Sampling Method" which I would not recommend), but I did find details on it in chapter 7 (Specialized Lowpass FIR Filters) of Richard's great book Understanding Digital Signal Processing- but no where else. There he mentions that it predated optimized FIR design techniques (least squares and Parks-McClellan) but suggests they may have practical modern use for highly efficient linear phase filters in certain use cases.

My question is not in the details of how this filter works (Richard covers that quite well in his book), but if there are other references to this class of digital filters and who coined "Frequency Sampling Filter" (unfortunate that the terminology is so close but yet unrelated to the "Frequency Sampling Method", and if anyone can bottom line / summarize concisely with a good demonstration of a case where such a filter would be a superior choice over the optimized design techniques for linear phase filters using Parks-McClellan (PM, equiripple) or Least Squares. (A comparison of these two techniques to mapping of classic analog filters is covered in the other question referenced above.) The implementation of efficient filters structures using the PM or Least Squares techniques should consider the significant complexity optimization that can be achieved with proper decimation/interpolation structures include polyphase implementation.

Please avoid a response that only states what I would refer to as unsubstantiated opinion / rumor. I do see already how this filter structure may possibly be superior in low complexity to achieve a similar performance for smaller ratios of passband to sampling rate. I'm looking for a substantiated comparison that shows the advantage if this is the case, or if this filter structure is indeed driven to obscurity for good reason. (In case anyone has that or is interested/curious as I am enough to create a comparison...if not I will eventually post one here as my own response when time allows).

@Dan Boschen What I call "frequency sampling filters" (FSFs) is a fascinating subject. (FSF filters are very briefly mentioned in five or six DSP textbooks that I have on my bookshelf.) As far as I know FSFs were first described in the literature in the late 1960s. Here are a couple of references:

In the 2nd & 3rd editions of my "Understanding DSP" book I show an example of my "Type-IV" lowpass linear-phase FIR FSF being more computationally efficient than a Parks-McClellan designed tapped-delay line filter.

The Parks-Mclellan FIR filter algorithm allows us to specify filter bandwidth, passband ripple, stopband attenuation, and transition region width. FSF design doesn't give us such detailed control of filter performance. But if you're able to design an FSF that meets your filtering requirements I maintain that the FSF will be more computationally efficient than an equivalent-performance Parks-McClellan designed tapped-delay line filter.

I've been thinking about writing a blog to introduce FSFs to people who do not have a copy of my "Understanding DSP" book. But such a blog would take quite a while to write. (TEASER: I now know a way to make FSFs even more computationally efficient than I've previously described them to be. If I write a "FSF blog" I'll describe those "even more efficient" FSFs.)

L. R. Rabiner and B. Gold, “Theory and Application of Digital Signal Processing,” Prentice-Hall, Englewood Cliffs, 1975 has a development of it in Chapter 2. They start with a general Lagrange structure and then move to the Frequency Sampling Structure that appears to match what Rick has in his book. 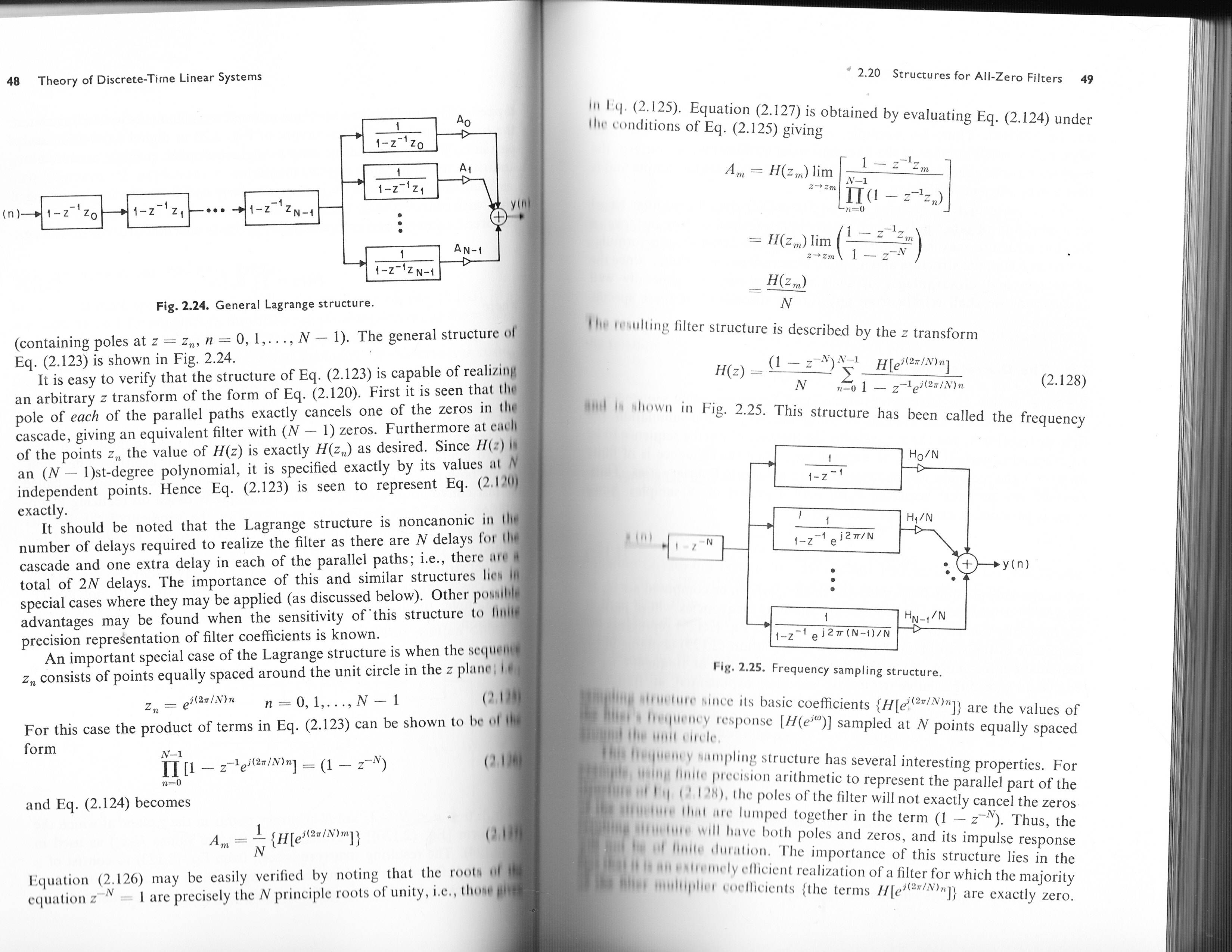 Not the answer you're looking for? Browse other questions tagged filter-design finite-impulse-response reference-request linear-phase or ask your own question.