The filter with the response function 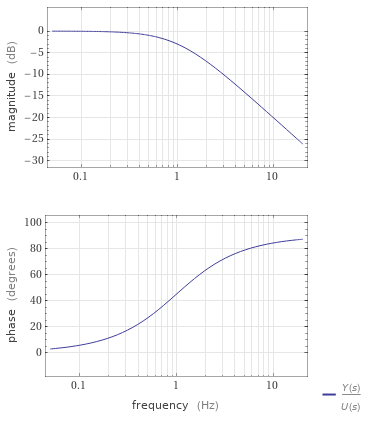 Is it anti-causal? Is there a way to deduce such information from the frequency response of the system.

The given transfer function has a pole at $s=1$. There are two possible time domain functions (impulse responses) that correspond to this transfer function. For the ROC to the right of the pole, i.e., $|s|>1$, the system is causal but unstable. It is unstable because the ROC does not include the imaginary axis ($\omega$-axis). The other system that is described by the same transfer function is obtained by assuming that the ROC is to the left of the pole, i.e., $|s|<1$. Now the imaginary axis is inside the ROC, so the corresponding filter is stable. However, it is anti-causal because of the ROC being a left half-plane.

By evaluating the transfer function on the imaginary axis (i.e., by plotting magnitude and phase), you imply that you're dealing with a stable system, i.e., you choose the ROC that includes the $\omega$-axis ($|s|<1$), which means that the system you're looking at is indeed anti-causal.

Not the answer you're looking for? Browse other questions tagged filters continuous-signals linear-systems causality group-delay or ask your own question.