The goal is to get a 200ms decaying delay of an audio signal while preserving the sharpness of attacks to mimick human perception of sound. The paper I'm following convolves a 200ms half-Hanning window with each frequency band to simulate it.

I'm using numpy.hanning() since there's no half-Hanning and have tried either setting the first half of the hanning window to 0, the first half to 1, or chopping it off and only using the second half. I'm also normalizing the window to keep scales the same.

Since I don't really know, which one of these would be the "correct" half-Hanning?

The chopping off version, which seems the most likely to me, works but is offshifted 100 ms to the left. Should I just shift it 100ms to the right and call it good?

Here's the plot of what I'm getting (blue is raw loudness curve, while green is adjusted). 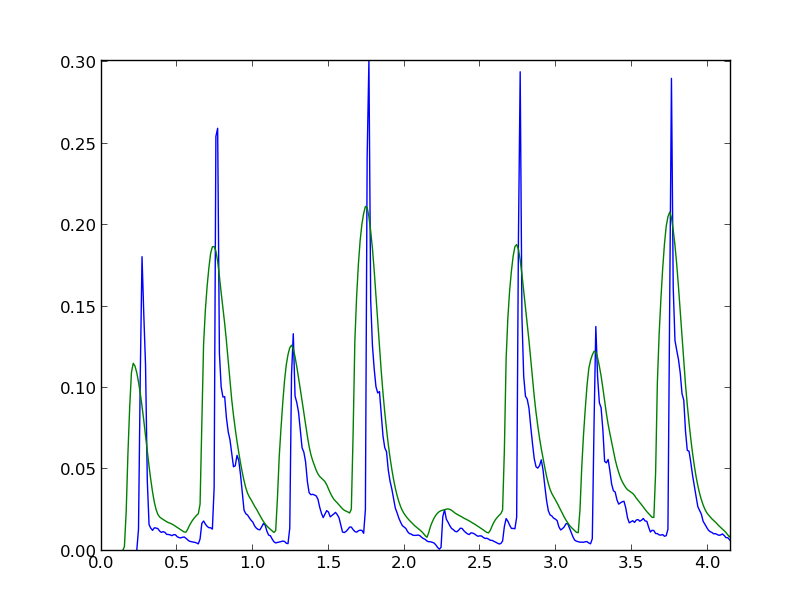 The paper I'm following shows this: 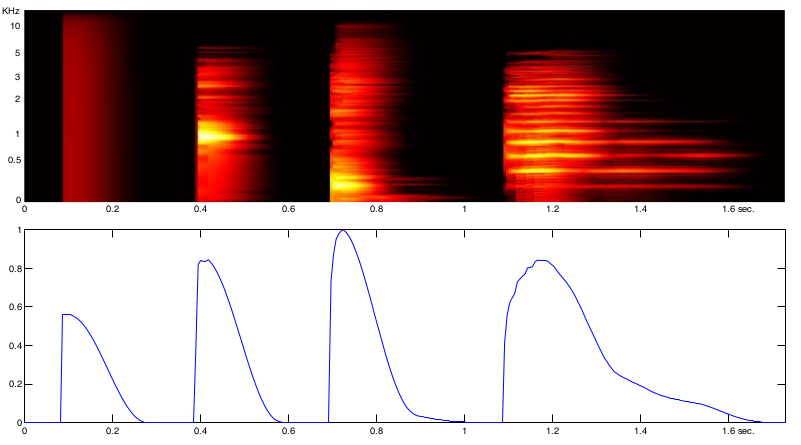 Using the second half only (chopping) is the correct way. Note that setting the first half to zero is actually the same thing, up to a constant delay. The 100ms delay you observe might be due to the use of the "same" flag for the numpy convolution. It seems to me that the right truncation for this application would be to use numpy.convolve(signal, window, 'full')[:len(signal)] - without the kind of centering that 'same' does.

As you have noticed, the peaks in the smoothed envelope function do not exactly coincide with the peaks in the original envelope and there is no magic trick to make them coincide (the delay will depend on the sharpness of the attack) - so the resulting curve is not ideal for very accurate beat detection and chopping.

Not the answer you're looking for? Browse other questions tagged fft audio spectrogram or ask your own question.

4
generating spectrograms in python with less noise
4
Effect of Hanning Window on phase of FFT
0
Reconstructing time domain signal with Hanning window
2
Designing a half band FIR filter with Scilab
1
Scaling for a 2D Hanning Window
2
How to deal with audio with different length in Audio Classification
1
Why square-root of Hanning Window
0
Half Window Functions and Formulas
0
Why there is static noise and voice distortion after convolving it with impulse response?