spectrogram of a (strongly) downsampled file

I downsampled an audio file to a very low sampling rate, 48hz. This is because I stored some information in the file, that are not really audio information but the audio format was convenient to use. After we recorded the files, we realized we can strongly downsample the original file without losing audio information, because the maximum frequency present in the spectrum are around 20hz - hence we can safely downsample to 48hz.

In order to check that the downsample was sucessfull and did not loose relevant information, I plotted a librosa specshow, to see whether it looks correct. But when I do that I see a lot of higher frequencies that were not present in the specshow of the original file.

Here a few code lines, so you can see what I did and the two plots to compare:

And here the two resulting plots: 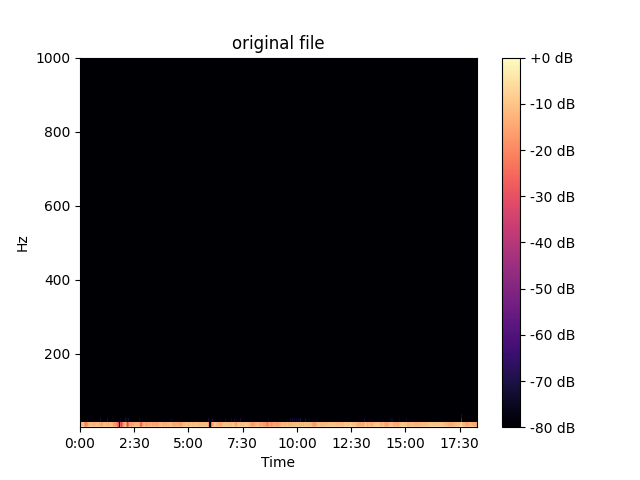 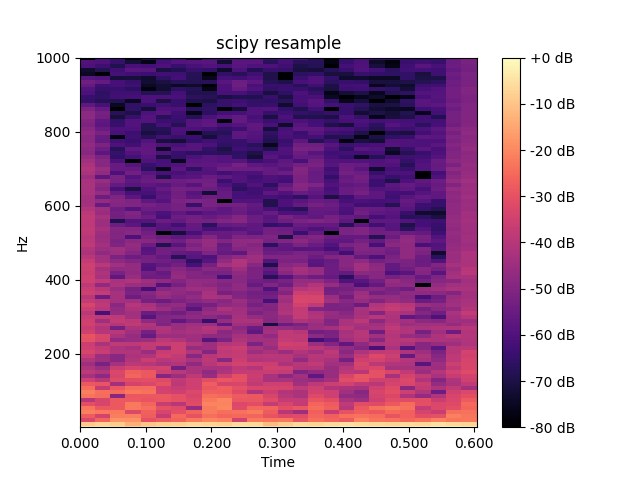 Is this maybe a problem of specshow with such a low and unusual sampling rate data? How can I check the spectral content of the downsampled file otherwise?

If you want to display the y-axis in actual Hz you need to pass in the sample rate into librosa.display.specshow. I think the default is 22050Hz which is wrong for both plots. The time axis for both plot should be the same (since the length in physical time should not have changed) and it clearly isn't.

Your second plot makes no sense. If the data is sampled at 48Hz, the highest frequency that can be in the signal is 24 Hz.

Down sampling is not trivial. The most crucial step is to pick the right low-pass filter, which is a complicated trade off between time domain ringing, residual aliasing, phase distortion, passband flatness, etc.

How can I check the spectral content of the downsampled file otherwise?

Compare the spectra from 0 Hz to 24 Hz "before and after". Make sure that the frequency resolution of the spectrum is high enough see enough detail. At 48 Hz you only get about 20 samples per second, so I would FFT the whole thing. Depending on how your boundaries look like, you may have to window it.

Not the answer you're looking for? Browse other questions tagged spectrogram downsampling scipy or ask your own question.