How to interpret values of the autocorrelation sequence?

I know that (auto)correlation indicates the "degree of predictability" of a variable with respect of another. However, this is a vague notion. I know that a blank process should have an autocorrelation similar to a delta, since information of one sample shouldn't say anything about another. I would like to have a more meaningful way of interpreting the values of the autocorrelation sequence.

For example, if I have this two autocorrelation sequences, 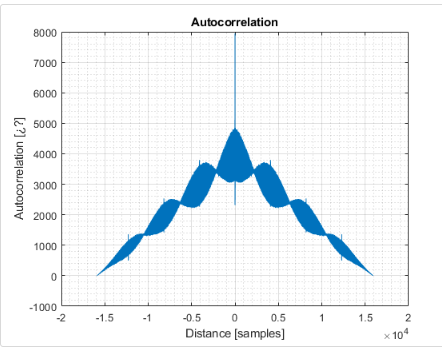 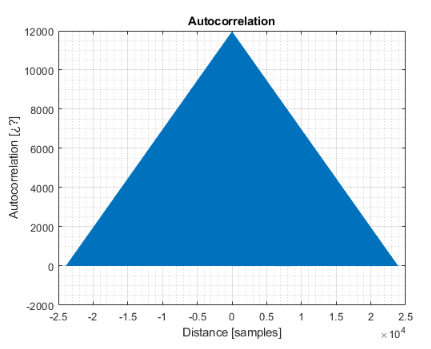 I really don't know how to compare them since I have no meaningful understanding of the value the sequence takes for each lag.

Another issue is that your original signal appears to have a DC (constant) offset. When the biased autocorrelation estimator is applied to a signal with a constant offset, the result is a triangular shaped function.

Detrend. de-mean, or apply a DC blocker to your signal before taking the autocorrelation and you'll get something more sensible (with fewer artifacts from known causes).

Let's look at a simple example.

First, let's take a sinusoid offset by a constant value. 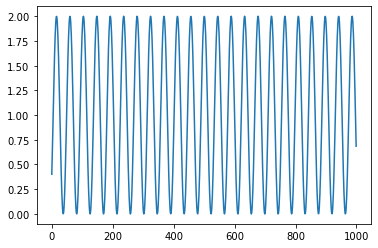 and find its autocorrelation. 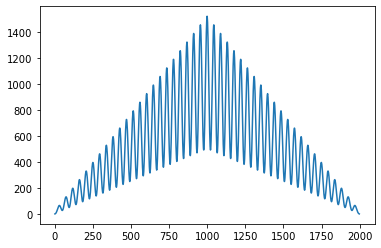 Because of the durations I've chosen, the two effects I mentioned are more apparent: the "baseline" (value about which the autocorrelation swings) is triangular in shape and the "envelope" (the outline) is also triangular.

First, let's remove the mean of the signal before taking the autocorrelation. 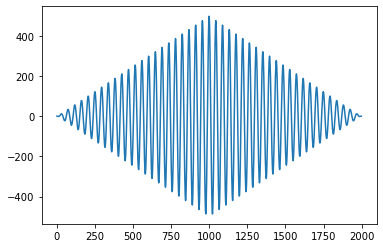 That makes the baseline zero, so the only effect left is the envelope.

Now let's try to correct for the envelope. 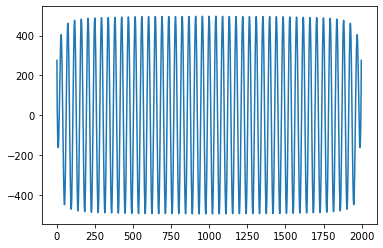 That matches a little better with the understanding that the autocorrelation of $\sin(\omega t + \phi)$ should be $\cos(\omega t)$, though it's not perfect because of the shortcut I've taken to form it (see code below).

Now, back to the actual question you're asking:

How to interpret values of the autocorrelation sequence?

As Knut says, it says given the value of the signal at time $n$, what is the signal likely to be at time $n+m$?

For signals like sinusoids, this means that the autocorrelation value at $n+m$ value will depend on the frequency of the sinusoid.

For signals like (band-limited) white noise, the autocorrelation value will be zero (or likely close to it for any particular noise realization).

I think of auto correlation as «self similarity». In practice: line the signal up with a copy of itself. Step the copy one sample at a time. Multiply corresponding pair of samples from the two and take the sum.

2
Audio codec analysis in MATLAB: crosstalk
0
Auto/cross correlation of a cosine in the context of an adaptive beamformer
1
Matlab - How to create an autocorrelogram using a spike-train
2
Understanding the definition of mean/autocorrelation
0
Would the ratio of Autocorrelation value and autocorrelation of noise for different data types be different? in Matlab
1
Autocorrelation for Stationary Signals
1
Hypothesis testing with binary pattern
1
Expected Value of a sequence with two random variables
0
Restrictiveness of the condition that different signals give same autocorrelation sequence