Connection from Fourier to Laplace Transform

I have a basic understanding of Laplace and Fourier but having trouble making a connection. Every time I attempt to look at reasons these are connected I'm told about the s-plane and regions of convergence which confuse me quite a lot trying to wrap my head around. What I would like to know is whether my understanding of Fourier is correct, with respect to phasors, and how I can connect this to Laplace.

So I understand that Fourier means taking your original signal and putting it into the frequency domain such as this figure here. 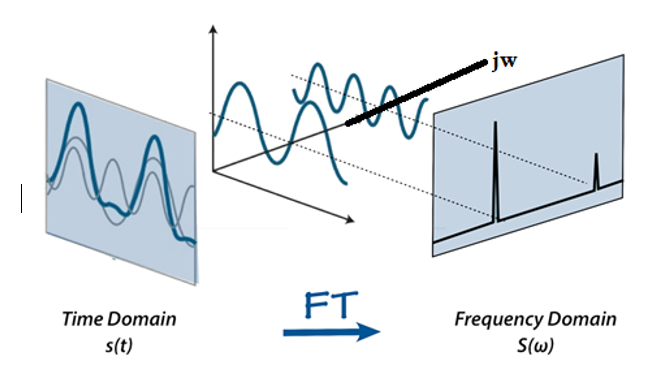 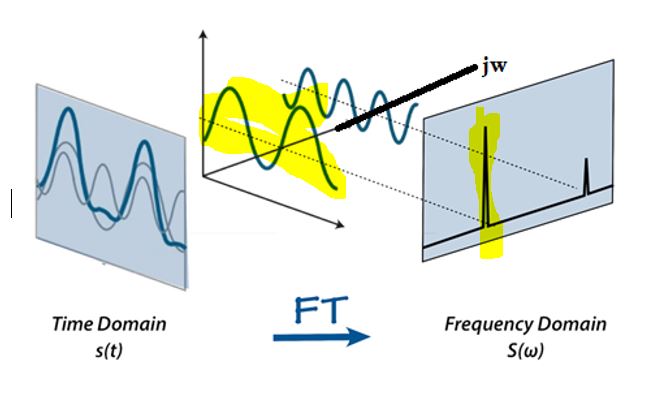 And then, because this is a sinusoid, I would plot it as a component on the imaginary vs time plane of the real-complex plane, as shown. 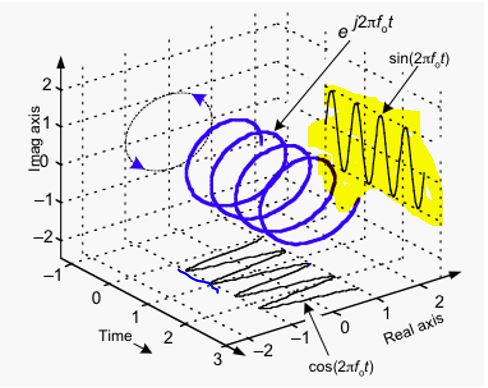 Because I would like to make a phasor out of this, I therefore will stop at the same measurement, w, or frequency that I took my sinusoid from which will give me a phase angle to stop my rotation at. Stopping at this rotation will then give me a phasor such as this figure.

What I need to understand is whether my intuition is correct in the connection from Fourier to phasors. Then how this connects Fourier to Laplace based on this image right here. I can see how you take multiple Fourier Transforms at different sigma's to create a Laplace, but I am having trouble discerning doing this from taking multiple sinusoids to make a Fourier. 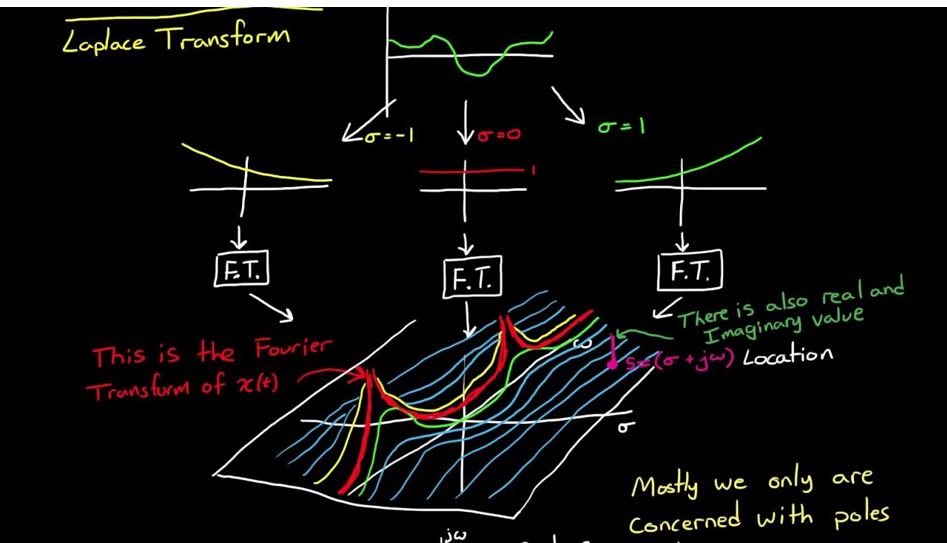 Yes, the OP’s intuition for Fourier seems correct and more specifically I call attention to the basic "correlation" structure and add more meaning to what $e^{j\omega t}$ is as the true "single frequency component" in signal processing (as opposed to using a sine or cosine, which for each consists of two frequency "tones": a positive and negative frequency.). I detail all this in this recent post specific to the Fourier Transform and its intuition, so won't repeat that here but recommend reading it before continuing with Laplace below:

With that behind us, we can move onto Laplace. Let's first provide some basic motivations for Laplace, and then we can see further into its intuition. 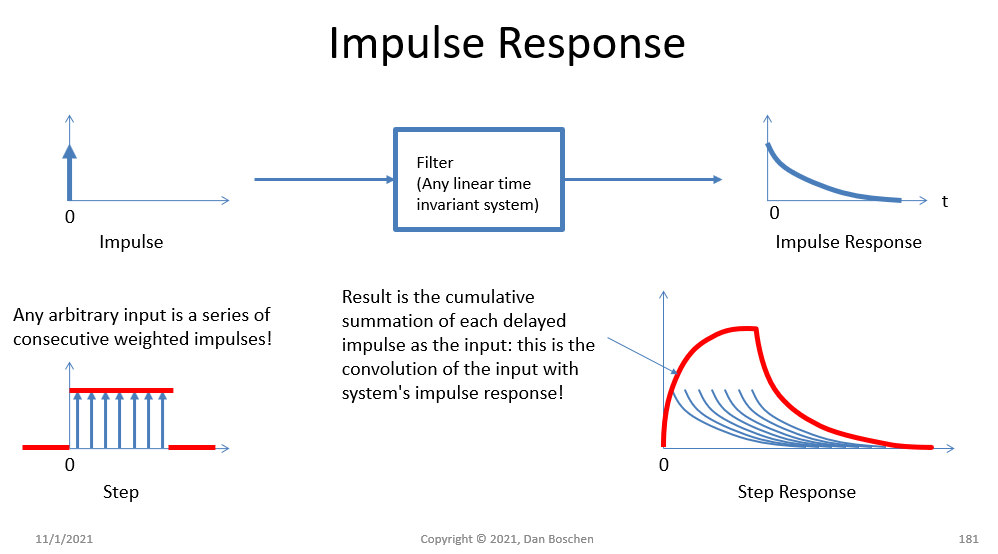 One problem with Fourier is that not all system impulse responses will have a Fourier Transform. The Fourier Transform is the result of the Laplace Transform when we restrict $s$ to be the $j\omega$ axis as the OP has graphically shown, and once we get our head around the "Region of Convergence" (ROC) we see that not all systems will have a ROC that includes the $j\omega$ axis-- for example systems with poles in the right half plane which are themselves unstable will not have a Fourier Transform. Yet these systems exist and we can stabilize them in control loops if we could only characterize them properly (Laplace can do this!).

To summarize some motivations for Laplace:

That said, like Fourier, the Laplace Transform is a form of "correlation" in that it is an integration of complex conjugate products (see linked post above). The Fourier Transform results in a one dimensional plot of the magnitude (and phase) of this correlation versus the frequency variable for which we are correlating over. So from the magnitude we can see the "strength" of each frequency component within some arbitrary waveform $x(t)$ given by the Fourier Transform (correlation with $e^{j\omega t})$:

Such as this example plot below where we have $\omega$ on one axis and show the magnitude on the other. Each sample actually has a magnitude and phase which we could show as separate plots, but important to note the results are complex quantities. 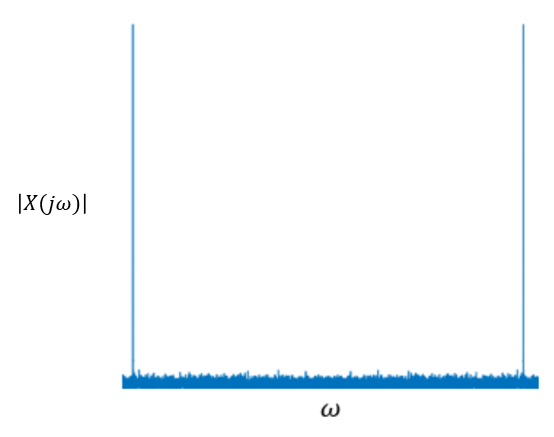 Laplace is of similar form, except we are "correlating" to $e^{st}$:

With Fourier we decompose an arbitrary function into it's individual base components as spinning phasors, each rotating in time at a constant rate (thus a constant frequency) with a constant magnitude.

With Laplace we add the ability for these phasors to grow or decay with time, and thus we determine all the base components in an arbitrary waveform (often the "waveform" is the impulse response of a system as introduced above) as spinning phasors that are allowed to grow or decay in time. The result of the Laplace transform when plotted is a surface plot since we vary both parameter (rate of spin or frequency and rate of decay). We typically simply plot the singularities where this surface goes to infinity (as poles) and where it goes to zero (as zeros) since every other point on that surface is uniquely determined from those poles and zeros (thus it is all we need to show to completely represent it).

For example, as shown in the plot below, if our waveform (here an impulse response) was a decaying exponential given as $x(t)=e^{-2t}$ then the Laplace Transform would go to infinity at $s=-2$, which is the one point where we are correlating to $e^{st}= e^{-2t}$ Makes sense!

This is the one and only location on the entire s-plane where the product $x(t)y(t)$ with $y(t)=e^{-st}$ (as we do when doing the Laplace Transform before integrating), where $y(t)$ will grow with time (as $e^{2t}$) in such a way to perfectly counter-act the decaying $x(t)$, resulting in a constant $1$ for all time-- and hence will grow to infinity as we integrate this product from $t=0$ to $t=\infty$ in the unilateral Laplace Transform applicable to causal waveforms. Similarly if $x(t)$ had any frequency components (spinning phasors), then the Laplace Transform will go to a singularity at infinity when $y(t)$ rotates exactly opposite (complex conjugate) and grows exactly opposite any decay. Very cool! 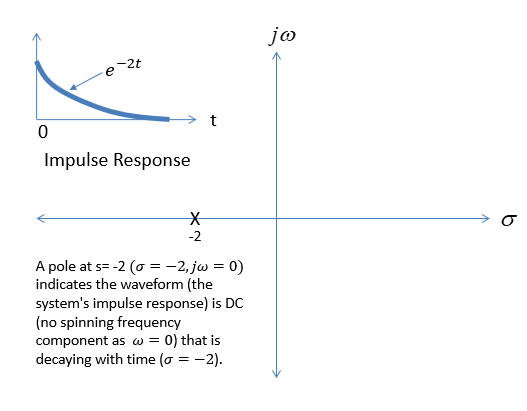 So we also can now see the whole "Region of convergence" thing and what is going on there: We saw above how we found the pole by the location where $y(t)$ grew just enough to perfectly counteract $x(t)$'s decay. The further we move $y(t)$'s real component to the left on the real axis, the more it will grow, and thus the Laplace Transform won't converge to a solution for any points beyond that boundary. That boundary is specifically given as the right most pole for causal systems.

Not the answer you're looking for? Browse other questions tagged fourier-transform laplace-transform or ask your own question.