How does JTFS work, intuitively? What are its motivations, and how's it differ from the Wavelet (time) Scattering transform? Can it be visualized?

Core results and intuition are provided in this answer, advanced details in another. Python implementation no longer available anywhere, because Kymatio scrapped my work.

JTFS remains identical to time scattering up to second order (minus averaging), where it introduces a significant difference; Ref 1:

time scattering has a tree structure. That is, each node only has one parent. In contrast, a general convolution network sums contributions from multiple nodes in a layer to produce a node in next layer.

JTFS breaks the tree structure by convolving along frequency, exploiting the joint time-frequency geometry. In detail:

We hence convolve $U_1$ (|CWT|) with joint wavelets. Full description in other answer.

where $X=\text{CWT}(x)$. Time scattering is insensitive since it's invariant to time shifts.

Left is the signal (zoomed), right its scalogram, first on bottom is time scattering, second is JTFS (spinned coefficients only), latter two with $T=\text{signal duration}$. Time scattering doesn't visibly change at all, while a fair portion of JTFS does. The relative distances, $||\Phi_0 - \Phi_1|| / ||\Phi_0||$, are:

"Frequency transposition" here means a shift in log-frequency, in identical time-frequency geometric sense to a shift in time:

All time-shift invariance apply analogously to log-frequency shifts. Invariance is also imposed to linear shifts but amount of invariance is determined in a nonlinear manner.

Is product of temporal and frequential; example of latter: 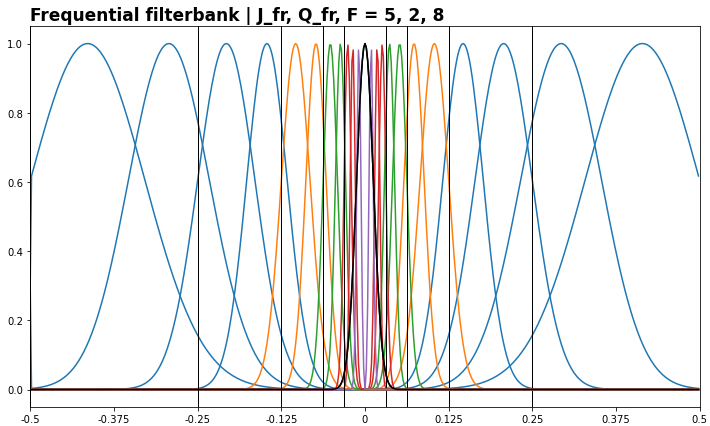 Joint (2D), where empty spots are what's omitted in calculation per symmetry (and would fill symmetrically), and (spatially) small filters dropped for clarity:

An echirp can be formed by shifting a delta (unit impulse), by a constant in time per a constant in log-frequency. Despite being remarkably different, time scattering cannot distinguish them.

Recall, a JTFS coefficient is output from a 2D convolution; we visualize with each such "joint slice" individually:

This spin assymetry illustrates FDTS discriminability. The ratio can be driven far greater with proper discretization, but not up to the theoretical ideal of infinity per finiteness limitations.

Focusing on down spin and lowpass, and changing the filterbank to produce fewer coefficients for clarity, let's show wavelets and the coefficients they produce:

The frequencies per slice are arranged low-to-high going top-to-bottom, as are the slices, opposite of the first GIF.

Energy shifts toward greater xi1 (frequency) over time, as expected for up chirp. Note the asymmetry of spins, and DC portion consistently dominating the overall representation. Former is more obvious by showing spinned only:

improvement [in instrument classification] likely stems from the fact that musical instruments carry important discriminative information in the temporal evolution of their spectral envelopes as well as frequency modulation structures, both of which are captured by joint decompositions in time and log-frequency

a signal with many transients, such as a jackhammer in a street scene, and misaligning its subbands yields a completely different sound

Note there need not be structures explicitly shifted in time depending on frequency; JTFS doesn't know, nor cares, whether this occurred. All that's needed is for time-frequency ridges to vary, or begin and end, which is true for anything that isn't an everlasting sine; JTFS spins will uniquely extract these features which may lack a familiar interpretation but nonetheless be useful.

I have implemented JTFS in Python, currently not available anywhere.

MATLAB implementations are available at scattering.m and ScatNet. With disclaimer that I'm the author, the Kymatio implementation is the most flexible and validated of any I know.

In addition to the References, Kymatio contains many in-depth discussions on various aspects of implementations and scattering properties.