What are the properties of the scattering transform, besides shift invariance and warp stability? How is it implemented in practice, and how can one visualize its computational graph?

Scattering overview provided in this answer.

That is, at each order $m$, we convolve every coefficient from previous order with every wavelet of current order; the number of coefficients thus grows exponentially. Zeroth-order discussed in "Energy analysis".

Key differences with CNNs: 1) kernels are fixed, not learned; 2) every layer's (order's) coefficients comprise the "output" (black dots in diagram).

For the same mean frequency resolution, CWT is worse than STFT at high frequencies. Scattering increases the effective resolution by extracting, via higher orders, the differences of frequencies: if we cannot distinguish $\xi_2$ from $\xi_1$, we may still find $|\xi_2 - \xi_1|$ (Ref 1, VI.B).

Borrowing an example from Ref 1, Fig 6: 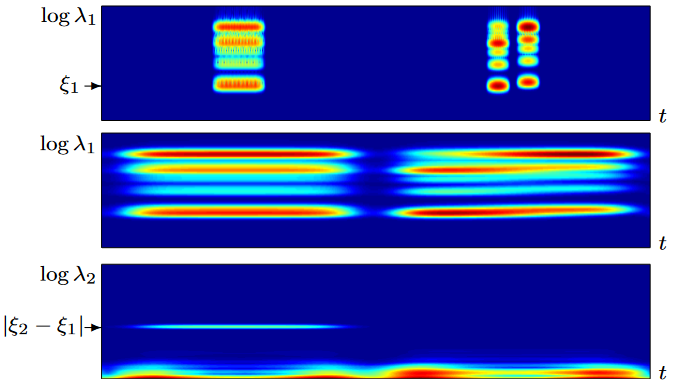 This resolving is owed to the fact that, closely spaced tones are equivalently a single amplitude-modulated tone at their mean frequency:

Is lossess "within tolerance", since wavelets aren't perfectly compact. Though, they can be: Morlets decay per $e^{-\omega^2}$, which hit sub-machine epsilon quickly. Thus convolving sampled can equal sampling a (continuous-time) convolution result, within float precision.

In practice a reasonable threshold is picked; Kymatio uses criterion_amplitude=1e-3, meaning, the wavelet's "support" is defined to end at the first sample which drops below 1/1000 of peak amplitude, or $10^{-6}$ of peak energy. We can subsample by any factor, but work only with powers of 2 for convenience. Taking the previous filterbank: 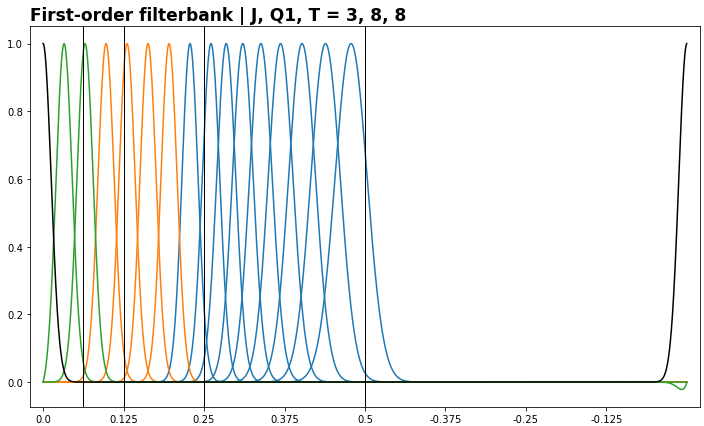 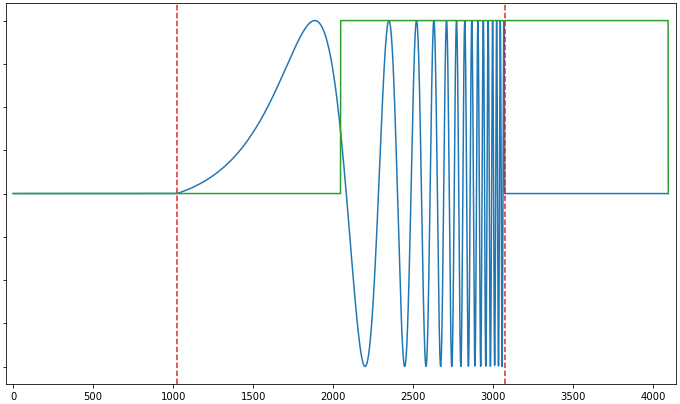 One may find the $T$ parameter surprising visually: 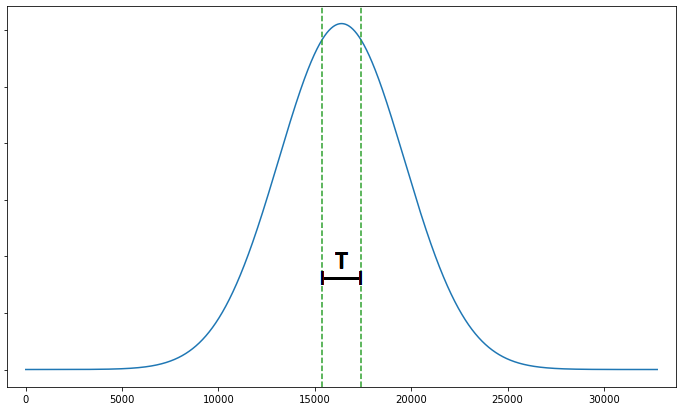 The support of the lowpass, defined by criterion_amplitude=1e-3, is x16 the width (i.e. scale), $T$. If we zoom on the $T$ portion, it looks nearly flat. Same for wavelets, largest scale being $2^J$. (Note, this is temporal support, relevant for boundary effects, whereas for subsampling we use frequential support)

Besides avoiding boundary effects, the idea's to emulate no padding - i.e. having an infinite signal (rather, longer than largest-scale wavelet's). It comes down to picking the "best guess" for the signal's continuation, which is best done with knowledge of the source process.

There isn't a one-fits-all, but my recommendation for the general case is reflect padding, which extends the signal from its local features, and is energy-conserving.

Flow of energy is flow of information. Write the filterbank as${}^{1}$

where $\Lambda$ is the set of all center frequencies. This is Littlewood-Paley summation, the sum of all filters' energies, which satisfies

that includes the lowpass to capture DC, which in a finite implementation requires infinite scale. Applying Parseval-Plancherel's theorem:

Taking an example filterbank and its LP-sum,

Exceeding 1 is an addressable implementation artifact, and so are sum oscillations. Assume for simplicity we have $\alpha = 0$; then the lowpass-wavelets energy split is 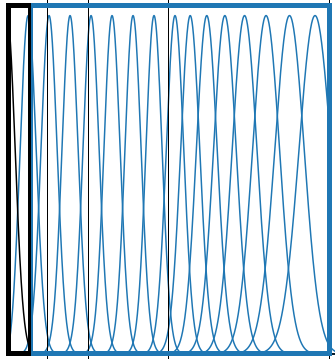 Usually the black portion (lowpass) is much lesser, but for clarity suppose it's even greater. Then, across scattering orders, the energy flow looks like:

where left shows fixed proportions for all orders, and right shows "realistic" proportions. Verbally, each order: 1) takes wavelet transform of previous order, takes its modulus, and passes to next order; 2) outputs lowpassing of previous order. $S_2$ is thus a second-order coefficient, produced by second-order's lowpassing of first-order's bandpassing of zeroth-order coefficients (i.e. the signal).

Flow of energy is flow of information: scattering has infinite layers, yet most implementations stop at two, citing that higher orders have "negligible energy". So what if they do?

That is, $S_3$ to $S_\infty$ describe only a small fraction of the input; it's as if we applied a transform on only this tiny "leftover". Could it possibly contain important information? Sure - but unlikely. The practical ratio for first two orders is also much less, (.7, .8, .9, depending on signal and $T$; Ref 1). Thus, analysis and synthesis information are fundamentally tied.

Note: "analysis vs synthesis" is also a distinction in frame theory, relevant to scattering. The word use here is my own and differs from it (except "synthesis" in both contexts means recovery).

Myth: scalogram isn't invertible because modulus kills phase. This is true of the Fourier transform, which is orthogonal. The CWT is a highly redundant transform, and phase information persists even past modulus.

Invertibility and its criterion were proven by S. Mallat and I. Waldspurger. We know a scalogram cannot be perfectly invertible due to phase-shift invariance; instead, it is invertible within global phase shift, $e^{j\omega_0}$.

This is a strong general invertibility. A mono-component signal, or signal writable in form $A(t) \cos(\omega t)$, is invertible within a simple phase shift:

Thus, instantaneous amplitude and frequency are recovered perfectly. In most cases, we don't care for such phase shift. If the signal is multi-component and its components can be fully separated, which holds sufficiently for a wide variety of signals, this invertibility holds. Else, the most general signal may degrade severely by time-domain appearance - but time-frequency ridges, and amplitude, will still recover perfectly. Complementary methods (e.g. synchrosqueezing) can improve component separation and relative phase recovery.

Scattering is invertible within a global phase shift and a global time shift $T$.

Can do same with scattering, and we'll observe worse reconstruction with greater $T$ unless we include higher orders; this is illustrated directly on audio in S. Mallat's lecture (17:32).

We find insight comparing impulse response${}^1$ of CWT and scattering, latter for all $T$; peak amplitude of each row has been normalized to be same for visual clarity (hence CWT', S'):

(1: unlike usual, scattering's IR can't be used as surrogate in convolution (i.e. overlap-adding weighted IRs) due to modulus nonlinearity)

In addition to all discussed, worth noting for the kymatio implementation: 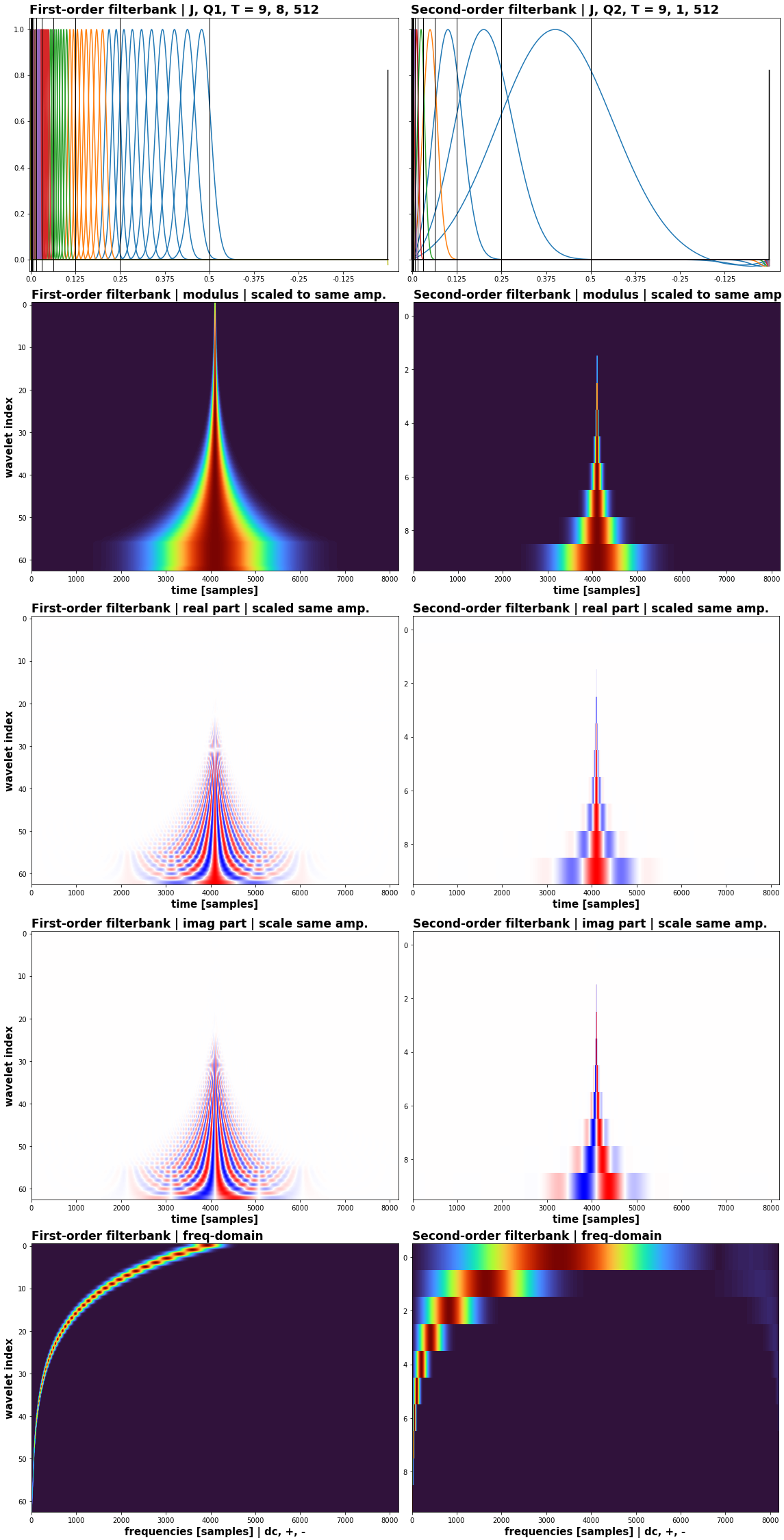 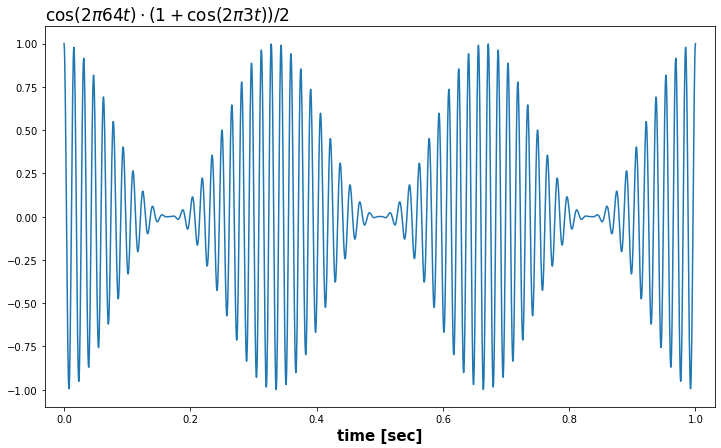 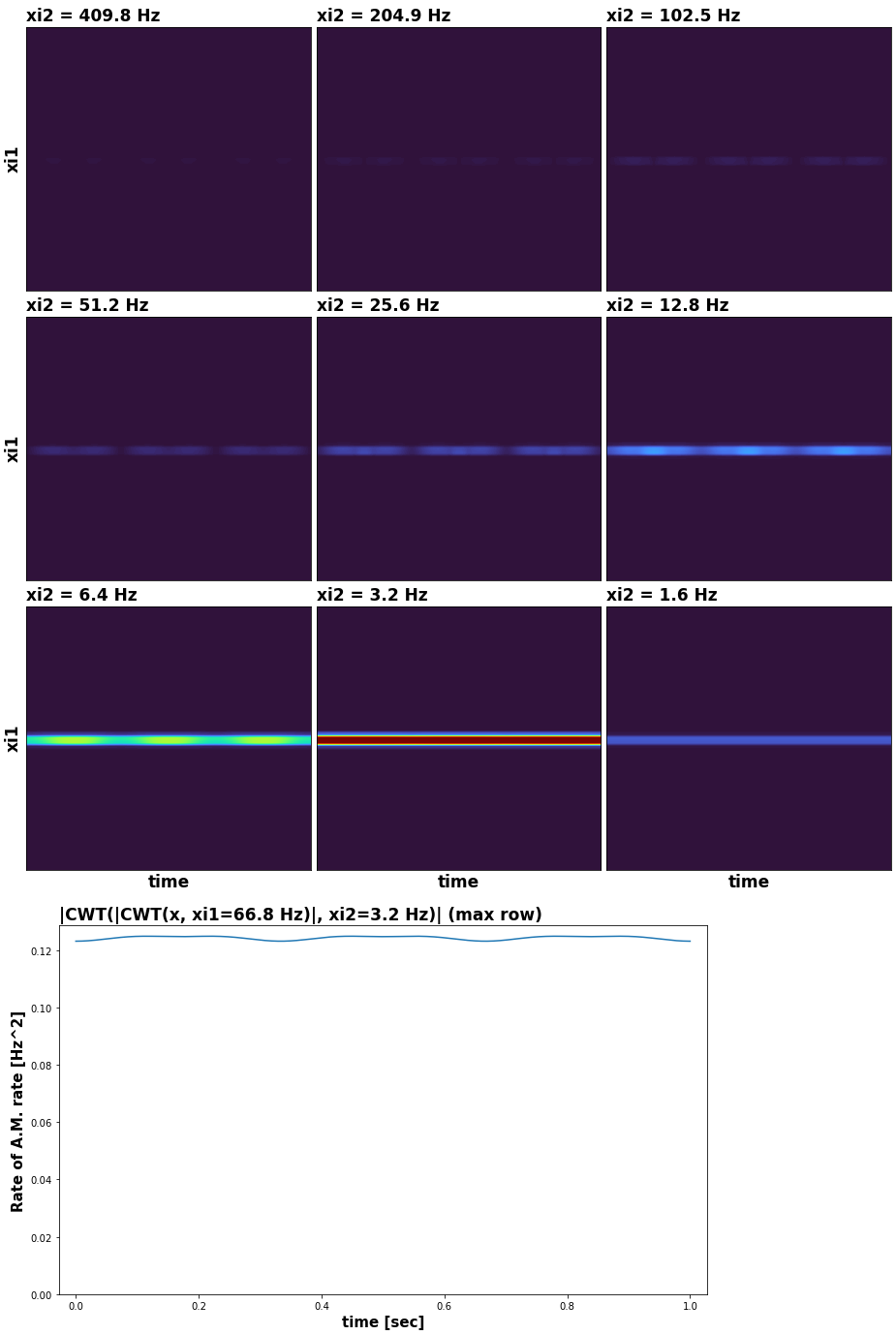 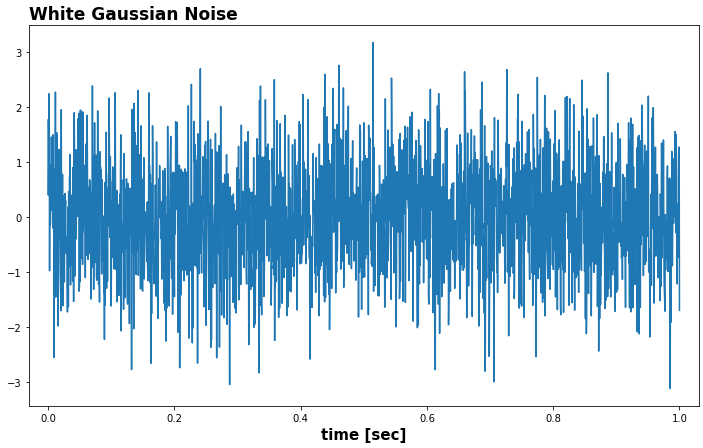 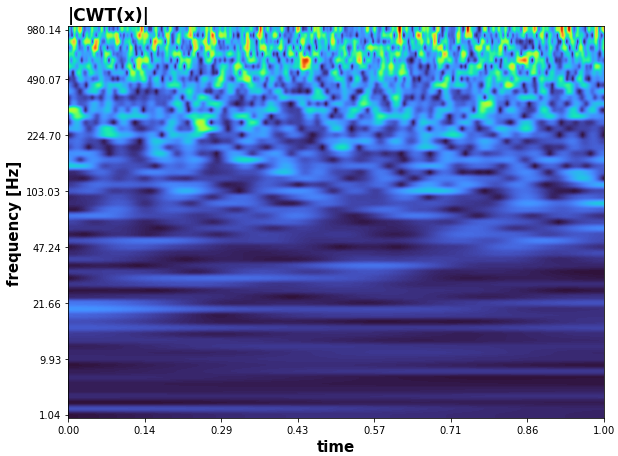 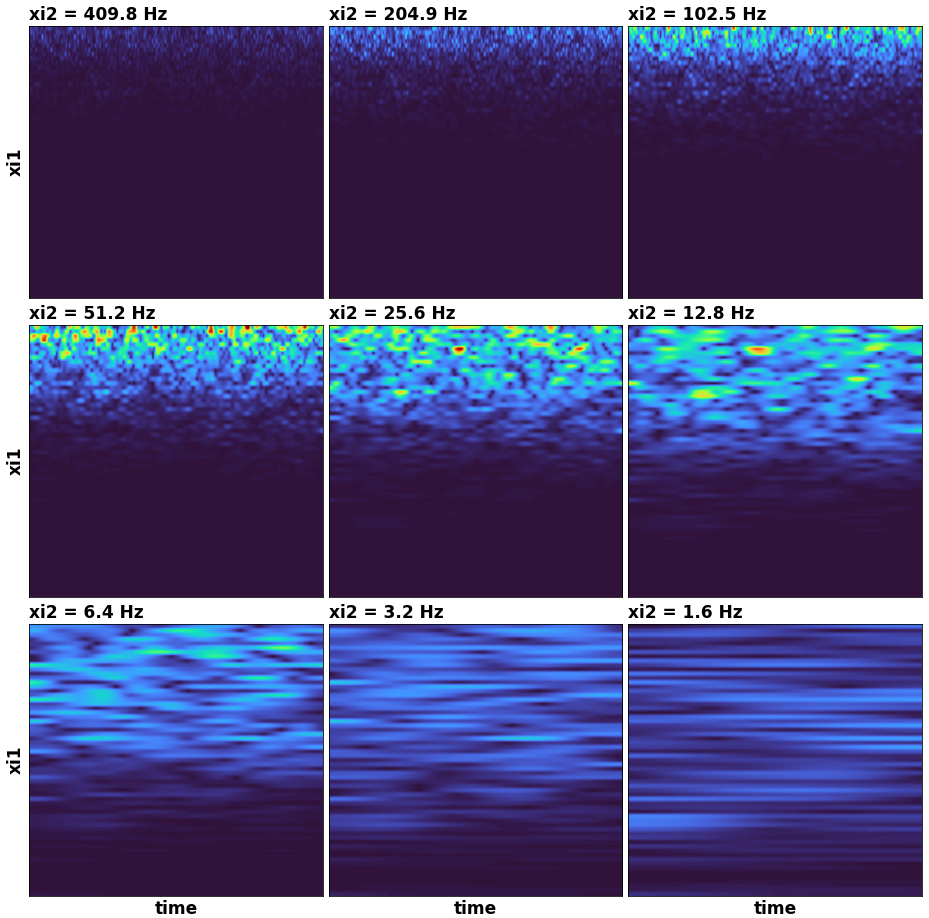 Thus frequencies near Nyquist (xi ~ .5) will lack AMs that are near Nyquist, and those not near it. In fact the highest xi2 shown above is .2, which is far from Nyquist; the actual highest was omitted (since 10 is awkward to subplot).

Implementations account this via a conditional: if xi2 < xi1: compute. This is akin to imposing $f_\text{modulator} < f_\text{carrier}$. Nonetheless, non-AM waveforms can have high xi2 contents if first-order wavelets are highly time-localized (e.g. square wave), but in most configurations xi2 < xi1 is a safe assumption.

Some are explained in Ref 1, others in these answers. Division into "reducing/decreasing/linearizing" isn't strict. Most properties are proven for both deterministic and stochastic processes.

Formally, means that representations of deformed signals form a ~linear subspace of undeformed. This can be measured with a discretized Laplacian:

"Invariance" means coefficient distance remains small, and changes little, for any deformation size under the scale of invariance. In theoretic work it often means this distance is and stays zero.

"Stability" means coefficient distance is bounded by only by size of deformation, not characteristics of the signal (besides its norm). That is, we can't find $x$ whose coeff distance with $x'$ exceeds said bound; this isn't true of STFT, where we can always drive distance to maximum ($||x|| + ||x'||$ per contraction) by frequency-shifting $x$, nor of CWT per time-shifting.