How does Wavelet Scattering work, intuitively? What are its motivations, and how's it differ from the (continuous) Wavelet Transform? Can it be visualized?

Wavelet Scattering is an equivalent deep convolutional network, formed by cascade of wavelets, modulus nonlinearities, and lowpass filters. It yields representations that are time-shift invariant, robust to noise, and stable against time-warping deformations - proving useful in many classification tasks and attaining SOTA on limited datasets.

Core results and intuition are provided in this answer, advanced details in another. Continuous Wavelet Transform is a necessary requisite; I recommend this tutorial. Answer covers 1D scattering, but much generalizes to images; for a description covering both, see this lecture.

As a short review, CWT measures similarity of the signal with wavelets of varying frequency and scale, at each point in time. We can visualize as follows, taking CWT of exponential chirp:

Is modulus of CWT convolved with lowpass, "temporal averaging":

This averaging imposes 1) time-shift invariance, and 2) stability against time-warping deformations. The overall operation is

yielding first-order scattering coefficients. $\lambda_1$ is center frequency of first-order wavelets (indexed by i in the gif). The convolution is of the lowpass filter with every individual row of CWT, Sx[i] = conv(phi, CWT[i]).

Proceeds by convolving modulus of CWT with second-order wavelets:

This "second CWT" is done directly atop modulus of first CWT - that is, a second-order wavelet takes the entire first CWT as input, convolving with every row, just like the lowpass.

Second-order coefficients are obtained by convolving modulus with lowpass:

and so on. Higher orders proceed the same, convolving wavelets with modulus of previous order, followed by modulus and lowpassing:

Visuals in other answer.

OA = elaborated in other answer

Why higher orders? The idea is to recover information lost in previous orders.

A proper wavelet transform is perfectly invertible, thus all information contained in $U_1x$ is carried to $W_2x$. Note this does not recover phase, since it was lost at $U_1x$ (we'd have to operate on $W_1x$ instead). However, most of phase information is encoded in redundancy of the transform; a scalogram is strongly invertible, ~perfectly for some signals (OA).

Averaging serves 3, modulus and higher orders serve 1 and 2. Synthesis remains nonetheless a significant consideration, since if synthesis information is lost, virtually all other forms of information are lost. Scattering is invertible, to an extent (OA).

In practice, scattering coefficients are subsampled, without losing information (it's lost at averaging). For intuition, note that STFT with hop_size > 1 is aliased, which loses analysis (but not necessarily synthesis) information. Regardless it's widely used, with hop_size in hundreds and thousands. That's because a sparse and redundant representation like STFT/CWT loses much less information in analysis per loss in synthesis: output can be smaller than input, yet more "valuable".

For classification, the idea is to balance inter-class variability against intra-class invariability: want coefficients that differ for different classes, but not for same. It's exactly what scattering strives for.

The Fourier Transform is an orthogonal representation: while it packs the most synthesis information per sample, it bears minimal analysis information. It's brittle against noise and deformation, and changes significantly with changes to input that are meaningless for a given task. Elaborated in References.

CWT decomposes a signal using a redundant "dictionary" of time-frequency atoms. In language, a rich dictionary contains many words, and some words will have many meanings, which allows expressing a complex idea in a short sentence (borrowing analogy from S. Mallat). Likewise, a rich dictionary of wavelets enables superior sparsity and 'expressivity'.

MFCC also averages, its own way, but loses information; this limits its effectiveness in many applications, which require larger-scale invariants. MFCC is also much less rich in analysis information and configurable invariants per lacking higher-order extensions.

Consider a windowed sine shifted in time, and its CWT:

The sine shifts, and CWT shifts by same amount (this is "translation equivariance", sometimes referred to as invariance; it's invariant in the sense of features (e.g. shape, energy) not changing).

Second row shows scattering with different $T$, the scales of invariance. It's invariance in two senses:

1 is better illustrated by comparing the shifts directly; taking max row of each:

$*$: it's "killed" on each individual coefficient, rather than on the signal itself. Variations on scales $<T$ is preserved partly via the redundancy of the transform, and recovered fully with higher orders of scattering, so only sense $1$ is applicable to the overall representation. (This needs elaborating, also see "T Note" in OA).

A time warp is a transformation 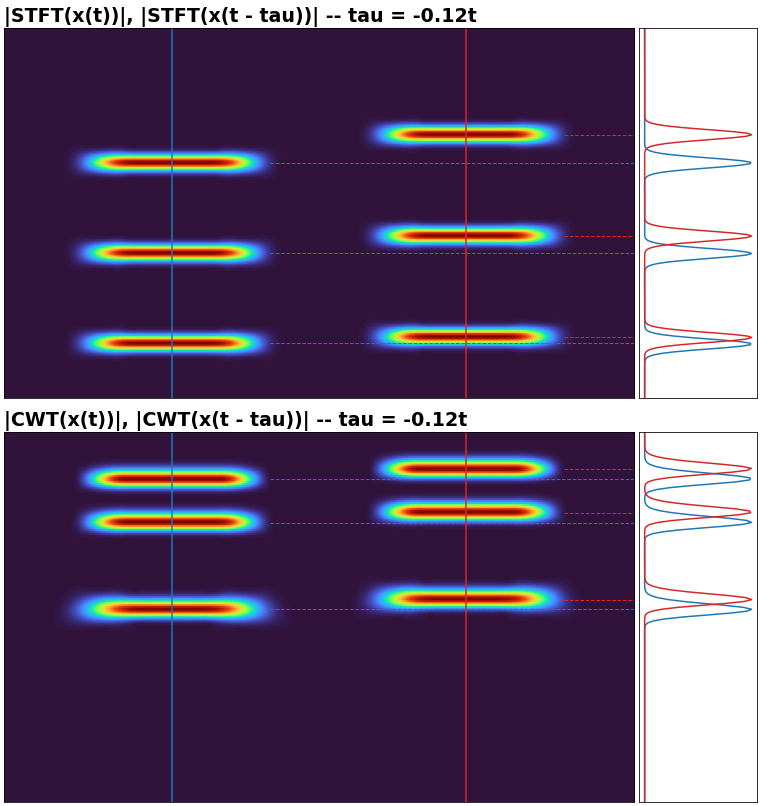 STFT partials shift more at higher frequencies for same time warp, eventually not overlapping the original in frequency at all. Despite $\epsilon$ being small, STFT suggests formation of an entirely new partial - and partials aren't shifted proportional to $\epsilon$. Meanwhile, CWT partials overlap at all frequencies, and by same amounts for sufficiently small $\epsilon$, and in proportion to $\epsilon$. Example with non-constant $\tau'$:

Next we apply the same warp at varying intensities:

Show all warps simultaneously via heatmap:

Scattering a reasonable time warp for all $T$:

Distance between warped and unwarped is reduced as expected.

Both CWT and scattering exhibit stability, but scattering's distance is globally lower. This owes to CWT's scale equivariance (OA), and the warp deforming mainly along frequency. Regardless, CWT isn't stable against more general warps; to show an extreme, consider time-shifting (a form of warping) a high frequency pulse:

Useful when we care for what happens, not when, or the fine aspects of how. The order of events may be preserved, but blended together. E.g:

The motivation for giving up any information at all, of course, is robustness to noise and diminished irrelevant stimuli: reducing intra-class variability while preserving inter-class.

Stability is hence useful any time a small change in the rate of the source process keeps our 'labels' unchanged. Or, for isolating a deformation from process of interest.

Linearizing permits approximating $\Phi(x) - \Phi(x_\tau)$ with a linear operator; deformations of this kind hence form a linear space, discriminable by a linear classifier. Invariants or covariants can be built in the transformed space. See OA, "Invariance" vs "Stability" for further detail.

While scattering provides powerful analysis information, it also loses nontrivial synthesis information unless opting for several orders (OA, "Energy analysis"). Put simply, "whatever you can do by hand, a neural net can do better". (Generalizing, whatever we can do with method X, there's likely a method Y that does it better. If X loses information, then Y can no longer "do it better" because "it" is partly gone forever - else, Y can invert X and do anything else).

Put differently, if scattering properties aren't useful for the task, other transforms can better utilize the same info.

Why the name, "scattering"?

Coined as a nod to quantum mechanics: from the reddish shade of a sunset to the glistering of a pearl, "scattering" is an umbrella term encompassing many microscopic phenomena. The commonality is, all involve a radiation of some kind as well as a maze of nonuniformities. For the transform, the "radiation" is a sound pressure wave, the "maze" is wavelets, and "nonuniformities" are modulus nonlinearities.

My preferred view is via energy analysis: scattering preserves input's energy. That is, coefficients' energies sum to input's. Equivalently, the input is decomposed. The decomposition is along "paths", e.g. $x \rightarrow \psi_{\lambda_1=.3} \rightarrow \psi_{\lambda_2=.2}$, and the paths follow a tree-like structure, branching off at each node. This "branching" is like opening a fist, with the arm being the "node".

If we pour a bucket of water on soil, it'll "scatter" along varying paths, with total water being what was in the bucket. A plant absorbing water is inverse scattering: water flows in opposite direction and metabolizes (used to synthesize).

List not exhaustive. Some attain SOTA on trialed datasets.

Other papers are also cited throughout the answers.

Available at Github. Python implementation to reproduce this answer will soon be available, "Follow" this answer or "Watch" ssqueezepy to be notified.

17
Synchrosqueezing Wavelet Transform explanation?
11
What's the difference between the Gabor-Morlet wavelet transform and the constant-Q transform?
8
Advantage of STFT over wavelet transform
5
Role of window length and overlap in uncertainty principle?
6
Wavelet Scattering properties & implementation?
3
Why does a signal with constant frequency have spots that changes colors at a specific value of scale (and so frequency) in the scalogram?
2
Wavelet "center frequency" explanation? Relation to CWT scales?
3
Effect of overlapping percentage on STFT output
2
What is the importance of the translational invariance of the CWT?
2
DFT filter bank interpretation, and perfect reconstruction?
See more linked questions