In my setting, I have different microphones recording a same speech signal. For each microphone recording, I can feel a slight difference in the playing sound. I am calling this property of a particular microphone as its texture.

Is there a way to eliminate this texture so that when I mix the recordings, I get one clear and enhanced speech signal?

Is there a way to eliminate this texture so that when I mix the recordings, I get one clear and enhanced speech signal?

That depends A LOT on the details: what is your specific setup, what is the main reason they sound different, what exactly do you mean by "texture" and "clean", and what are the specific requirements of your application.

For starters you can try to time align both signals and match the Power Spectral Density of the recordings. See if that helps.

Of course each microphone sounds different. Because each mike has a different construction, different values for their electrical, mechanical and acoustical components, sometimes different working principle, which causes to have entire different electro-mechanic-acoustic circuits. That's why they have different frequency responses, and there are other factors too like distortion, saturation and non-linearities.

What I would do in your place is to try to find the frequency response curve for each mike, and then try to equalize each recording with the inverse-response of the actual mic response.

For example suppose you recorded with a Shure SM58. Given a SM58 frequency response like this:

Doing this, each recording should approximate to a flat and uniform frequency response. It will be a bit hard to achieve such a precise equalization. I would try to mix both parametric and graphic eq.

Needed to say, because of the proximity effect, the response itself of a mic would depend of the distance between the source and the mic, used for recording. So try to choose a response curve that would match the distance used for the recording process. 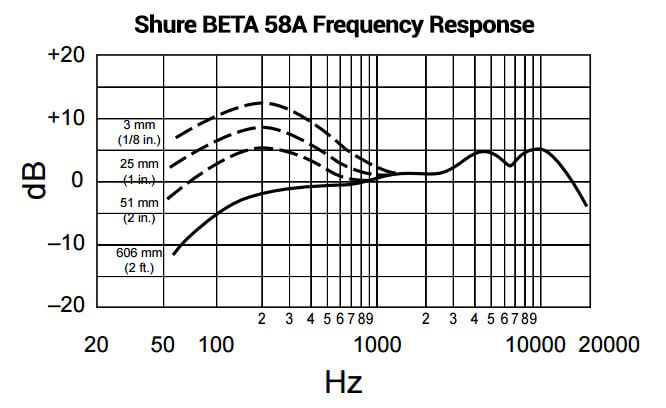 Even the most professional mics like the Beyerdynamic M88TG comes with the measured response for the actual unit, with matching serial number.

Not the answer you're looking for? Browse other questions tagged audio digital-communications speech-processing audio-processing speech or ask your own question.

5
How do the English pronunciations of "tiu" and "tou" differ?
1
Seamless audio loops via Fourier transforms?
1
How to mix two audio files recorded with different settings to obtain a realistic result
0
Removing known sequence from an audio sample
0
SNR estimation in segmented speech signals
2
How to extract a signal received from a given angle by two microphones
0
Distinguishing Spoken Speech from Played-back Recording of Speech
3
Beyond "mid-side": decompose an audio stereo recording (coincident microphones) into Mid + 45° + 90°
1
Is there a way to get the "mode" of several recordings? (to remove 1-off noise)