This effectively make the detector more robust to noisy/blurred images and able to find more features.

However, there are cases where two or more features are detected at the same location on different scales. See the image - each circle represents an oriented corner, radius of the circle corresponds with its scale: 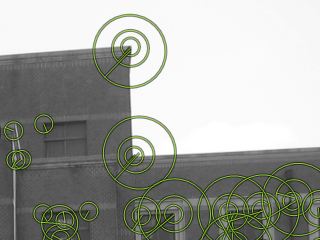 Because of this, some features have similar descriptors and this would theoretically weaken later correspondence matching.

Detectors like SIFT or Harris-Laplace deal with the problem by either detecting scale-space maxima only or finding characteristic scale of each detected corner.

I think it would be reasonable to group corners that are close to each other spatially and then choose just the strongest one (the one with the strongest response is nearest to its characteristic scale). I am already performing Adaptive Non-Maximal Suppression, but this happens on each scale separately (to keep moderate amount of features on each scale) so the corners with similar locations can still remain when they are on different scales.

Maybe just operating on descriptor vectors would be sufficient, but this problem have much higher dimensionality.

Browse other questions tagged local-features harris corners detection or ask your own question.

9
Image Processing Prior to Feature Detection
4
What scale should a detected SIFT point be extracted at?
2
Understanding Integration Scale in Multi-Scale Harris Corner Detector
2
Feature matching of images without corners
0
Given the 4 corners of two QR codes on a photographed sheet of paper, can we get a deskewed rectangular image?
1
Harris Corners Detector squared derivatives
0
Detecting corners using structure tensor matrix