Why does the Direct form I become our first choice for fixed-point implementation?

I understand that DF2 and DF1T should never be used in fixed-point implementation because the poles come first resulting in overflow in these two cases. But why is DF1 better than DF2T? Is it related to the following property that DF1 avoids internal overflow?

In this book the author says that

It is a very useful property of the direct-form I implementation that it cannot overflow internally in two's complement fixed-point arithmetic: As long as the output signal is in range, the filter will be free of numerical overflow. Most IIR filter implementations do not have this property.

I understand the two's complement wrap-around example the author gives. It seems that this property has two prerequisites：

The second one is easy to understand but the first one is not. What does "only one summation point" mean and why do the other forms of IIR filters not satisfy this condition?

Thank you in advance.

Before we get into it though, there are three concepts of fractional fixed point computations that are important to understand:

In this example, $y[0]$ is used as an accumulator, and the values in this accumulator are only added or subtracted, so there are no multiplications between additions and subtractions. As long as the final output is within range, you will not have any errors due to overflow within the filter. The same could not be said for Direct Form II or Transposed Direct Form II. This is why Direct Form I is usually the way to go as long as you use the proper scale factor.

One important note is that some fixed-point processors saturate overflows by default, which makes this property of the Direct Form I filter unhelpful.

Mostly yes. DF1 is a perfectly good choice for floating point too. The only minor downside it that DF1 has twice the number of state variables than TF2. However if you implement cascaded biquads (which is the most common implementation), subsequent DF1 stages can share state variables. For example a 8-biquad filter needs 16 state variables in TF2 and 18 (not 32) state variables in DF1, if it's written properly.

The final result y(n) is in range.

That is an invalid argument. Regardless of topology, you have to manually scale your filter so that the output doesn't clip. DF1 offers no advantage here at all since all topologies produce the same output. In the following we will assume that the filter is already scaled not to clip the output.

There is fundamentally only one summation point in the filter

That's not wrong but still missing the point.

This is all about state variables. State variables are information that you need to store so it can be used in the calculation of the next sample, i.e. they implement the delays.

Every time you store something in memory you will have to truncate to a finite world length. That creates noise and you also need to make sure that you don't overflow.

Most fixed point processors used an wider word width for intermediate calculations (often referred to as "accumulator") , so clipping during the actual math is less of a concern.

TF2 has one internal state variable, and you would have to calculate the transfer function from the input to the state variable to determine whether it may clip or not. So you end up with one extra scaling step which isn't trivial to do in both analysis and implementation.

For TF2 the gain between input and state is "bounded", i.e. it cannot exceed a certain value (which I'm currently too lazy to calculate, maybe 6 or so?) that's reasonable regardless of the filter coefficients.

TF1 and DF2 are very bad since the gain is unbounded and highly dependent on the filter coefficients. Flor typical audio filters, it's not unusual to see a gain that exceeds 100 dB or more. ! This can be a real problem, even for 32-bit floating point.

It is not terribly difficult to design in and maintain a double-wide accumulator in a fixed-point machine. e.g. two 16-bit signed numbers are multiplied to be a 31-bit signed number (0x8000 x 0x8000 is the only product of 16-bit values that needs 32 bits). 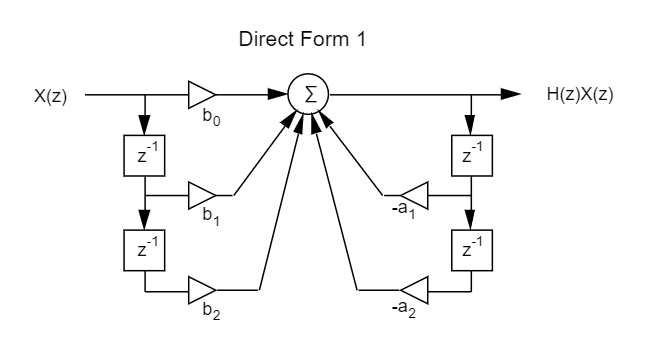 in addition, with this simple DF1 topology, simple noise-shaped quantization that gives you infinite signal-to-noise ratio at DC is also possible. It's sometimes called "fraction saving" in which the quantization is always round down (drop the bits to the right of the quantization point). Then whatever bits you dropped in the previous sample, you zero extend those bits and initialize that 32-bit adder with those bits so they get added into the current sample before quantization. This eliminates a nasty limit cycle.

Not the answer you're looking for? Browse other questions tagged infinite-impulse-response fixed-point or ask your own question.