How do I confirm that range cell migration correction was done correctly? Is there a way to check this graphically without looking at the signal data?

I am implementing the Range Doppler Algorithm for a Synthetic Aperture Radar project and I am at the step where I must perform Range Cell Migration Correction. This step involves creating a sinc interpolator to correct the spread of the signals energy across range cells. See example image 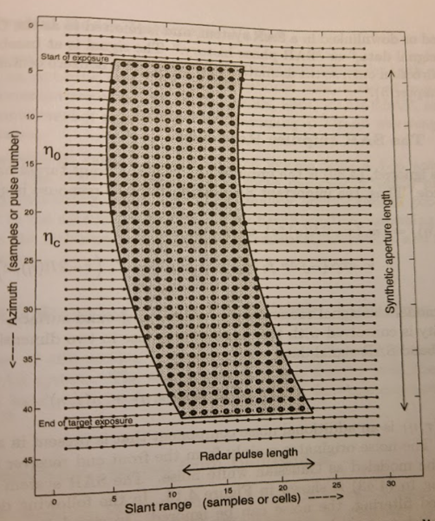 The interpolation is needed to get all of the data into one range cell. Is it possible to confirm that an interpolation worked properly without looking at a plot of the signal? If so how would I do that?

DSP is mostly like any other discipline of software development ¹.

If software quality hinges on you understanding what you see, then you will never find mistakes later on, when you can't look at internal plots anymore. As you noted, looking at plots doesn't usually pose the best method of checking validity of an algorithm, especially because the criteria for acceptance or rejection are not formally y defined. On an especially frustrating Friday, you might accept something that you'd clearly spot as wrong next Monday! And that without any intent to cheat: humans are not good at checking constraints.

You write some code, and then you wonder whether it is correct. The time-proven remedy for this kind of issue is the ability to test that hypothesis. In software engineering, we call such rests unit tests when applied to functional units (like your RCM implementation), and integration tests when they are used to verify a complex system of individually tested units still works together.

So, here, you'd want to write unit tests. In my experience, it's important to not start with a very complex example - start with a signal that you feed into your RCM (i.e. what would normally come out of pulse compression) that consists of all zeros but for a single one in a cell that will not migrate. Input should be output, and if that works, you probably got a lot of things right. Then calculate a point where the migration is a multiple of of full cells. Test with the same single-target signal. Works? Great!

Only after actually test the sinc interpolation. Calculate a point where you will have a rational amount of cells to migrate, say $\frac{15}8$ of a cell. Sinc-interpolate your signal by the appropriate factor (8): fft of your input signal with the length of the same, add 7 times as many zeros to the end of the result, ifft, take the 15., 23., 31., ... sample of the result. Compare what you get that way with you RCM.

Not the answer you're looking for? Browse other questions tagged discrete-signals signal-analysis interpolation radar sinc or ask your own question.