How to demodulate PM with signal faster than carrier?

I have a signal that is a periodic concatenation of truncated Lorentzians ($\frac{1}{1+x^2}$), like so: 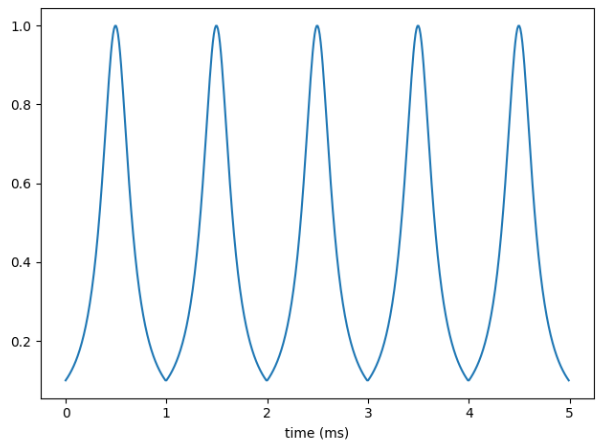 The exact shape of the signal is unimportant I guess. I can approximate it with its first few Fourier components, so assume it is a single sine tone if it makes it any easier.

I am interested in recovering the modulation depth $\Delta\phi$.

Am I on the right track? If so, how does the amplitude of these sum & difference frequency components relate to $\Delta\phi$?

Since the result is small angle FM modulation, for a single tone there will only be two significant sidebands each with magnitude close to $\beta/2$ (for the single sinusoidal modulation case with small $\beta$), where $\beta$ is the modulation index (peak angle). The two sidebands would be centered about the carrier spaced by the modulation rate - regardless of what frequency the carrier is.

If we had a multi tone FM modulated signal that occupied the entire spectrum within a given bandwidth and the carrier was less than half that bandwidth, if the signal and carrier were real then we would see aliasing in this case consistent with what has been described above for the case of a single tone, while if the carrier were complex (as well as the resulting modulated waveform) then there would be no aliasing effect either.

As far as demodulation, this is possible for the case of a complex waveform where a complex carrier was used but would not be possible with a real carrier with an arbitrary unknown modulated multi-tone signal due to the aliasing. With a single tone modulation, the demodulation of the modulated tone can be easily determined. For example: consider a 1 Hz carrier with 5 Hz modulation and mod Index 0.2. Given the mod index this would produce two dominant sidebands 20 dB below the carrier (approximately), with the carrier at 1 Hz and the two sidebands at 6 Hz and 4 Hz. (Which is +6 Hz and -4 Hz for the positive frequency of the real carrier and -6 Hz and +4 Hz for the negative frequency of the real carrier). The levels and spacing of the sidebands when viewing the positive and negative frequencies are not affected by the low carrier but their spans overlap. For a single tone modulation we are able to extract all relevant information regardless but if multi-tones were present the overlap may result in aliasing effects that would be challenging to separate without knowledge of the modulated waveform itself (which if known completely, demodulation wouldn’t be necessary).

The first term is simply the unmodulated signal. The second term is an AM of $\dot x(t)$ at the frequency $f_\mathrm{PM}$. It is indeed entirely irrelevant which of $f_c$ or $f_\mathrm{PM}$ is larger.

Now, $x(t)$ is not a single tone. It is periodic with period $1/f_c$ though, so we conveniently express it via its Fourier series:

For a Lorentzian, the Fourier coefficients are known, $c_k \propto \exp(-\alpha|k|)$, for some $\alpha$ relating to the linewidth. In my case, the Lorentzians are truncated. In frequency space, the truncation coresponds to a convolution with a sinc function. From here, it is straight forward to compute the Fourier representation of $\dot x(t)$.

(Measuring these individually, and combining them into an optimal estimate in the presence of noise is a different matter.)

As mentioned by Dan Boschen, there is a risk that the spectra of $x(t)$ and $\dot x(t) \sin (2\pi f_\mathrm{PM}t)$ overlap, complicating the detection. It is something I'll have to keep in mind.

Not the answer you're looking for? Browse other questions tagged phase demodulation or ask your own question.

12
How to demodulate an OFDM signal
10
What is the connection between analog signal to noise ratio and signal to noise ratio in the IQ plane in a quadrature demodulation system?
7
Extracting accurate phase and amplitude information from FFT with an arbitrary number of samples
8
QAM constellation slicer with unknown carrier phase
1
Adding phase noise to a signal results in amplitude variation on a constellation - whats the mistake? *plots inside*
0
Why can't quantum phase noise in radio astronomy amplifiers just be filtered out after down conversion, instead of down-converting first?