I'm making a Raspberry Pi bat detector using a USB-powered ultrasonic microphone. I want to be able to record bats while excluding insects and other non-bat noises. Recording needs to be sound-triggered to avoid filling the SD card too quickly and to aid with analysis. This website explains how to do this with SoX:

This records for 5 seconds after a trigger sound of at least 0.1 seconds and includes a 10kHz high pass filter. This is a good start, but what I'd really like is an advanced filter that excludes crickets and other non-bat noises. Insect and bat calls overlap in frequency so a high pass or band filter won't do.

The Elekon Batlogger does this with a period trigger that analyses zero crossings. From the Batlogger website:

The difference in sound production of bats (vocal cords) and insects (stridulation) affects the period continuity. The period trigger takes advantage of this: 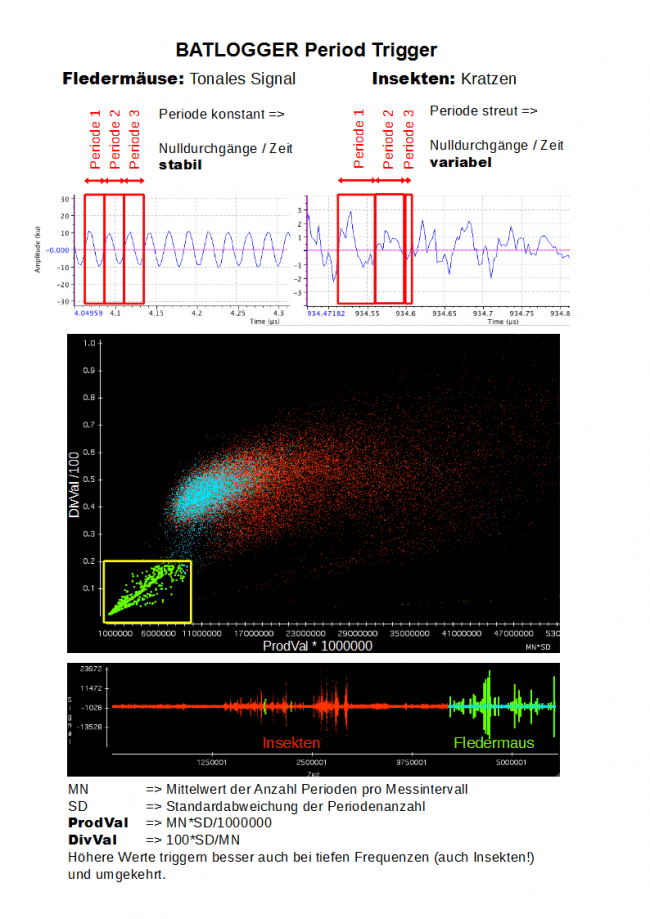 Translated text from the image:

MN => mean value of the number of periods per measurement interval

SD => standard deviation of the number of periods

Is there a way to implement this (or something to the same effect) in Raspberry Pi OS? The language I'm most familiar with is R. Based on answers to this question it seems like R would be suitable for this problem, although if R isn't the best choice then I'm open to other suggestions.

I'd really appreciate some working code for recording audio and filtering as described above. My desired output is 5 second files that contain bat calls, not insects or noise. Needs to be efficient in terms of CPU / power use and needs to work on-the-fly.

I've got a basic sound-activated script working in Python (based on this answer) but I'm not sure how to include an advanced filter in this:

First – the fact that the filename ends in .wav indicates this is an uncompressed file. That's a great way to waste storage!

There's lossless compression formats (mostly: FLAC) that should do quite excellently on bat sounds (meaning they don't need much space) and deal relatively gracefully with usual background noise. It's quite possible that this already solves your problem! FLAC allows for sampling rates up to 655350 Hz, so your 384000 Hz digitized audio should just work.

Then: yes, zero-crossing detection is one method to measure frequency, but in the presence of more than one tone or wideband noise, it's not a good choice.

A simple band-pass filter, which lets through only the frequencies you assume bats use (mostly exclusively), followed by a power detector (take the square root and smoothen the result) would work better - and that's exactly what the sox call is doing, it seems (just with a high-pass filter, i.e. it assumes bats aren't in a frequency band, but all above 10 kHz is bats).

Now, implementing this isn't hard, but honestly, R is simply the wrong choice of tooling there. It's a nice language for data analysis after the fact, but for online analysis/filtering, it's pretty much just a hassle (I wouldn't even know how to use it for that at all). Also, I'd argue that running R on segments of sound repeatedly is anything but computationally efficient, but I don't know the R interpreter intimately enough to really back that claim with facts.

Luckily, this really doesn't have to be hard; there's dataflow modelling languages that allow you to implement this without hard coding like the language "Processing", or GNU Radio¹.

I'll just leave a quick GNU Radio companion-implemented flow graph that I had lying around as illustration (I changed a few parameters to make it fit your use case):

Note that zeroing out any signal that's not happening while there's detected bat activity makes for a signal that very nearly compresses to "nothing", so you get one continuous file (with correct timing!) that only uses significant storage space for the times that something actually happened.

Now, as you said, you're looking for something more advanced than the sox command line you cited (and this really just does essentially the same: high-pass filter, detect power, cut off if below threshold).

I'm not experienced with bat sounds (I'm assuming you're the chiropterist, here), so the better design has to be left to you. But start with this idea:

First, you use a simple high- or band pass-filter to suppress everything that's decidedly unbatty. Then, you could use something like a PLL (phase-locked loop, a device that tracks the speed of the phase of a sine over time, i.e. at what point in its cycle the sine is) to detect whether there's a dominant frequency in the signal; if that PLL's detected frequency doesn't "jump around wildly", you're likely to hear something like a single tone. You can then use that to detect the presence of a single tone and its frequency! You can then analyze the frequency "trajectories" etc. Very likely, you'll even be able to make out the Doppler signatures of the bats' movements.

But: this is all a bit "luck-based", as well, there's birds and insects that make single tones in similar frequency ranges, too. This might indicate this is actually one of the situations where learning a detector with a neural network would work fine (and these are not necessarily that heavy that a raspberry pi couldn't run the classifciation live, but there's little reason, probably, because zeroing out the definitely-non-bat-times together with audio compression will make the storage problem probably disappear).

Not the answer you're looking for? Browse other questions tagged filters audio python filtering audio-processing or ask your own question.