Last call to make your voice heard! Our 2022 Developer Survey closes in less than a week. Take survey.

Why is z (and not ω) the variable of interest for discrete time systems?

Where X(s) is the Laplace Transform and may be evaluated as:

The variable of interest (on which the Laplace Transform depends) is the complex angular frequency $s = \sigma + j\omega$. If $\sigma= 0$, the Laplace Analysis coincides with the Fourier analysis since $s = j\omega$

In a discrete time Frequency, the Z transform is usually used:

It seems that: "Until it's continuous, $\omega$ is important. When your signal becomes discrete, $z$ is important". But I do not understand why.

The z-transform is the discrete version of the Laplace transform and in both cases z and s are the set of all complex numbers, and as such we map with the transform the time domain function into the domain of complex frequencies; signals that change in rotation only which is the Fourier Transform and in addition to that such signals that can grow and decay in time. This leads to great mathematical simplifications, for example doing this will translate integral-differential equations into simple algebra.

Consider the Laplace Transform for a causal continuous time sequence:

The Laplace Transform when applied to a discrete time sequence becomes:

Note this simple case of applying this formula to solve for the Laplace Transform of a discrete-time two sample moving average, and then solving for the poles and zeros: 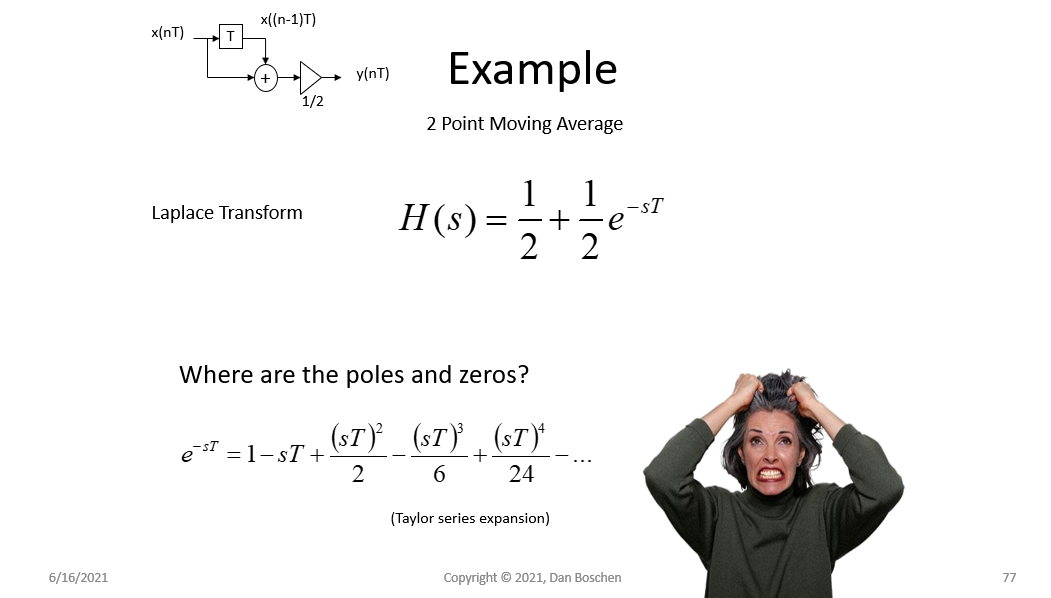 If we substitute $z = e^{sT}$ the transform then becomes the "z Transform" as:

And the example above becomes the much simpler polynomial ratio as:

This simplification is not limited to discrete-time systems as we can have similar complexities in continuous time of transfer functions involving fixed delays (with the same challenge of having a transcendental equation versus simpler polynomials of fixed order), in which case we could make the same substitution to proceed with further processing and mathematical manipulation. The point is that in discrete time this always occurs that we are working with systems of consistent unit delays, and the z-transform abstracts that exponential that is always there and avoids us from carrying it through every computation unnecessarily. It is much simpler. This is no different from other mathematical mappings and change of basis with the main objective that in the new space it is much easier to manipulate the equations and find solutions, and if the original space was important, we can transform back to that after all the heavy lifting is done.

Frequency warping only occurs if we choose to map transfer functions from continuous time to discrete time using the Bilinear Transform method and this is only because this method will provide a one to one mapping from the unique continuous frequency domain which extends to $\pm \infty$ to the unique frequency domain for sampled systems which extends from $-f_s/2$ to $+f_s/2$. Other mappings exist with no warping but will instead have aliasing.

Not the answer you're looking for? Browse other questions tagged discrete-signals signal-analysis finite-impulse-response digital-filters analog-to-digital or ask your own question.

6
How/why are the $\mathcal Z$-transform and unit delays related?

4
Main differences to take into account between continuous and discrete time signals
0
understanding discrete-time convolution in LTI systems
3
Regarding Bode plots; $H(s)$ and $H(j\omega)$
4
Periodicity of the discrete-time Fourier Transform
5
Why not use the same "standard" exponentials for both continuous and discrete time
4
One Sided Waveforms in Discrete Time and Frequency?