One-sided waveforms in both time and frequency?

Can a complex signal be one-sided (causal in time and positive only spectrum in frequency) in both domains?

I understand that a function can't have finite support in both domains, but what if both domains extend to infinity in just the positive direction?

Or is there a clearer proof or example of the ability to have a one-sided signal in both domains?

Clearly we can approximate obtaining single-side waveforms in both domains sufficiently for any practical use, to the same extent we are able to practically use Hilbert Transforms through delay and truncation and ignoring the error- so I'm not looking for that answer but the theoretical proof that it can't be done within the constraints of finite delay (or the example that can be).

Note that the convergence of $(1)$ is a necessary and sufficient condition for $x(t)$ to be causal.

Consequently, there are no causal (one-sided) analytic signals, just as there are no causal ideal frequency-selective filters. Regarding the existence of causal signals with one-sided transforms, there is nothing special about analytic signals. As soon as the magnitude of the Fourier transform is required to be zero over some interval, it follows from $(1)$ that the corresponding signal cannot be causal. So we can generalize the terms causal and analytic to one-sided for both domains.

I thought about this a bit, and I wondered whether something that numerically approximates the wished-for signal might be good. So I implemented a project onto convex sets (POCS) approach to synthesizing such a signal. 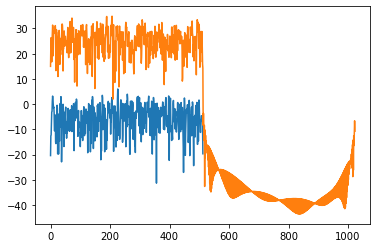 I'll answer in terms of the inverse Fourier transform.

We seek some $X(\omega)$ such that the complex sinusoids it weighs, in summation (integration), cancel to zero for $t < 0$ - but also $X(\omega < 0) = 0$. That is, both real and imaginary components of this sum are zero.

We also cannot have

over any interval $(t_0, t_1)$ since sine over any frequency interval (/differential) $(\omega_0, \omega_1)$ is orthogonal to sine over any other interval (for $\omega > 0$), i.e. different frequencies cannot cancel each other over a continuous interval. What allows FT to ever be continuously zero in the first place is the negative frequencies.

In summary: no, because cosines and sines of same frequency, or sines of different frequencies, cannot cancel over a continuous interval - thus neither can any their possible sum. This argument repeats for the real part, and for forward FT - hence concludes the 'proof'.

Such an $x(t)$ would be equivalent to multiplying in time by a complex unit step, whose FT is

Why not just make a causal real signal analytic? Suppose

What's the inverse FT of this? Wolfram won't tell.

Though it won't guarantee the imaginary part to be zero, the real has to be (invalidaing Approach 1). An idea I've had, if it's possible to force one component to zero, then it'll take both $R$ and $I$ to do so, exhausting degrees of freedom to also force the other component to zero.

This is not an answer, rather a rationale I am following.
(I know there is the "comment" functionality, but I don't have unlocked it yet)

Anyway, I would shortly describe my observation as: your answer reduces in determining whether a generic signal (not necessarily an analytic one) with finite support in time/frequency can have one-sided infinite support in frequency/time.

Let me clarify. Consider a time domain signal $x(t)$, even in time, centered at the origin and with finite duration $2T$, then its one-sided version in time (namely, causal) would be $$x(t-\tau), \; \tau>T.$$ We all know, from the FT's properties, that $$x(t-\tau) \Longleftrightarrow X(f) e^{-j2\pi f\tau}.$$ The complex exponential has infinite support extending from $-\infty$ to $+\infty$, hence the question reduces to the support of $X(f) = \mathfrak{F}\left\{\,x(t)\,\right\}$. As far as I know, being $x(t)$ a windowed version of some signal extending for the whole $t$-axis, the convolution with the $\mathrm{sinc}$ (considering a $\mathrm{rect}$ window) in the frequency domain would result in a support extending from $-\infty$ to $+\infty$. Clearly this is not the theoretical proof, but my aim was to point out that the kind of proof you are looking for may be different from the one you initially thought.

I don't expect the relaxation of some of my hypothesis on $x(t)$ (e.g., time-even) to have an impact on the core issue.

As usual, things should work also the other way (i.e., considering $X(f-\xi)$ as starting point).

Not the answer you're looking for? Browse other questions tagged fourier-transform frequency-spectrum hilbert-transform analytic-signal or ask your own question.

4
One Sided Waveforms in Discrete Time and Frequency?

3
What is the reason for filtering out the negative frequencies of a signal?
3
Inverse Laplace transform of two-sided and one-sided Laplace transform
0
One sided frequency spectrum (Matlab vs. Origin)
4
I Q sampling and baseband version of analytic signal
2
Magnitude of the analytic signal
3
Proof of Bedrosian's theorem
1
How an algorithm for measuring the analytic signal (Hilbert transform) gives us complex value at the end?
1
Symmetries of analyticity / zero self-correlation
2
Analytic Signal Block in Simulink Gives Reduced Amplitude for the Imaginary Part