Transmitting an approximate CW with an FM modulator

Imagine we had an FM modulator with carrier frecuency $f_c$. My doubt is about the optimal approach to use it for transmitting a tone (CW) of a frequency $f_c+\Delta f$.

Where $\beta$ is the frequency deviation and $|x(t)|\le1$. Making this expression equal to the desired output:

The solution to this equation is $x(t)$ beging a constant function. However, implementing this in real life leads to one big issue: modulators (and RF components in general) usually have DC blocks at their inputs in order to avoid transistor biasing and other problems.

This condition leads to the condition of $x(t)$ having a mean value of $0$ or, equivalently,

It is now clear that it is theoretically impossible to transmit a pure CW signal with such modulator (except for $x(t)=0$, which would lead to $\Delta f=0$). Nevertheless, what I am looking for is some way to transmit a similar (the cleaner, the better) signal to a CW.

For instance, let, for positive values of $t$,

For integer $N$, this theoretical solution would have a mean value of $0$ while producing a good approximation to a CW at the output of the modulator. However, it seems to be far from easy to implement in a physical system.

My question then are:

· Is there any feasible way to implement an approximation to the above function in a physical system? If so, how clean would the CW at the output of the modulator be?

· What other funcions $x(t)$ can provide a relatively good tone at the output of an FM modulator?

Thank you very much in advance!

One practical and traditionally used approach when the modulated waveform itself does not need to extend to $f=0$ (as in the case of the OP's wanting the transmit $f+f_\Delta$ is to use a PLL, or even an FLL as depicted in the block diagram below, such that the loop bandwidth of the loop is lower than the desired modulation frequency. The modulation signal is summed directly to the voltage controlled oscillator together with the frequency stabilization signal from the loop filter. The loop itself due to the tighter loop bandwidth will only correct relatively slow frequency changes (drift and close-in phase noise) while ignoring the higher frequency modulation signal. This is because the transfer function from the VCO input to the output is a high pass filter functionally, while the transfer function from the reference oscillator (used to stabilize the output) is a low pass filter.

Below shows a practical application of this for FM broadcasting of voice with the loop bandwidth set to be below the typical voice spectrum. 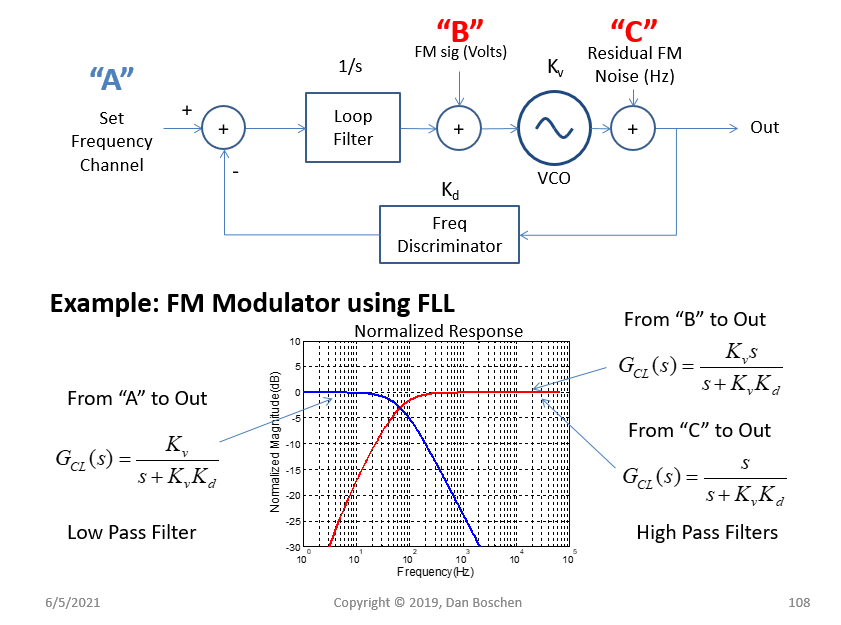 So in this case specific to the OP's question, the block diagram above could be used to transmit a CW FM modulation frequency, as long as the frequency is above the cutoff of the loop and in the passband indicated by the red curve.

Not the answer you're looking for? Browse other questions tagged signal-analysis frequency modulation frequency-modulation or ask your own question.

7
Why would I want to define a modulation index for each tone (DSB-FC)?
5
Hexagonal Modulator Comparison with Square Modulator
4
Finding out modulation index and DC offset
4
How condition for existence of Fourier transform is valid?
2
Use of the Dirac delta as a sampling operator
1
How to generate IQ component for transmitting 2FSK
1
FM: Do rational ratios of carrier to modulator signals really produce harmonic spectra?
0
How to deal with modulator jitter?

// TODO sg: TMP solution until we are confident in our current implementation of async imports // once we are, we can move the if into the js entry file and dynamically load the mark obsolete module