What is Self-noise in TED algorithm

I am working on a research project. The main task is timing error correction algorithm. I start with studying algorithms which are exist. Currently I have read about Gardner TED algorithm for PSK modulation signals. In the last publication (“A Modified Gardner Detector for Symbol Timing Recovery of M-PSK Signals” or “Symbol-Timing Recovery with Modified Gardner Detectors”) was mentioned a self-noise of TED algorithm. It is written that because of PSK signals are highly bandlimited, the self-noise is appeared.

Honestly, I have never read about self-noise in contest of TED algorithm. Why does self-noise appear? Is it the same self-noise as it appears in microphone?

Sub-Question What is first: TED or downsampling? Is it important what will be first?

This is further detailed at this post where it is shown that the error curve (the "S-curve") of magnitude versus timing error in the TED is the waveform at the zero crossing locations (changed in sign properly if the data is going 0 to 1 or from 1 to 0). Thus we see all this effect directly from an eye diagram such as the one posted below where the zero-ISI at the symbol decision for data demodulation is clear, as well as in comparison the substantial jitter at the zero-crossings (which is all due to the pulse shaping filter alone in this plot).

Notice specifically in these comparative eye-diagrams that there is timing jitter in the zero-crossings of the receiver waveform. In these plots, the waveform on the left has only gone through one pulse shaping filter: the Root-Raised-Cosine (RRC) filter in the transmitter. This shows that transmitted waveform as received prior to the second RRC in the receiver (for the complete Raised Cosine response with zero-ISI at the symbol sample locations for data demodulation as indicated by all the trajectories passing through the same point in the right hand plot). For this reason a Gardner TED works better when using the waveform prior to the second RRC filtering step in the receiver (the matched filter) unless further pre-filtering is used to eliminate this ISI at the zero-crossing locations. 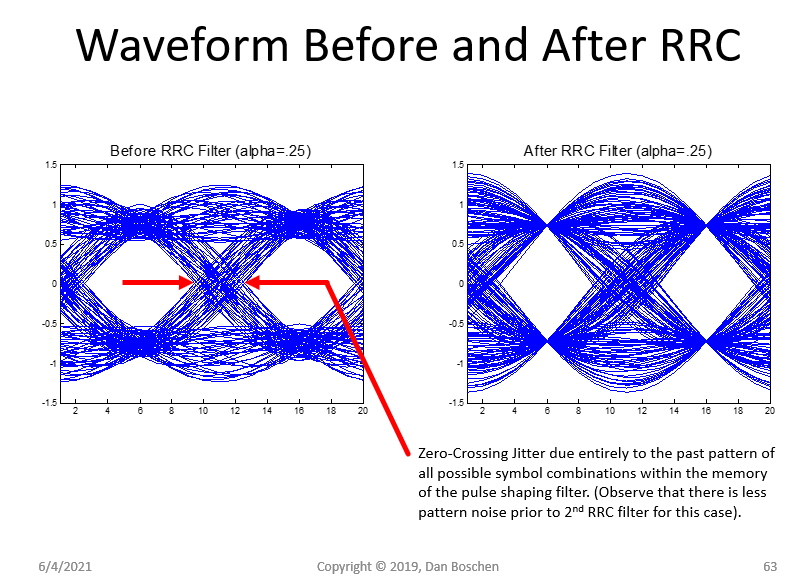 Loop bandwidth in the timing loop can also be considered a source of "self-noise" in the sense that if the loop BW is too wide the loop can remove information content from the modulation if phase modulation is used. This is really removing S from SNR rather than adding N, but the end result is the same that the SNR will be reduced due to the timing loop implementation. I explain this trade further at this post.

I also found interesting the noise shaping property of this pattern noise, such that in proximity of the tracking position the noise is shaped such that more noise is filtered out by the tracking loop itself, whereas in acquisition conditions where a timing offset exists the noise is white as demonstrated in the graphic below showing the frequency spectrum of the Gardner TED pattern noise (self-noise) in both cases. The plot on the left shows all possible outputs of the TED versus timing offset, along with the average of all these which is the "S-curve" as the measured error for our timing loop--- as time offset increases to the right, the average error is positive and as time offset decreases to the left, the average error is negative. This error is what is integrated (averaged) in a timing loop which when locked will drive the waveform sampling to be at position A (and as typically done with 2 samples per symbol, the other sample will be at our optimum sample location for data demodulation; the decision sample). The plots on the right are the FFT of the overall noise from the two slices on the left, so represent the frequency spectrum of this pattern noise. Certainly from this plot we see when considering the error on any one sample that the self-noise is HUGE, but this should not be an issue in a properly designed timing loop where we are only concerned with the noise after the loop does it's longer term averaging of this noise (which is considered as part of the loop design together with the overall system requirements). 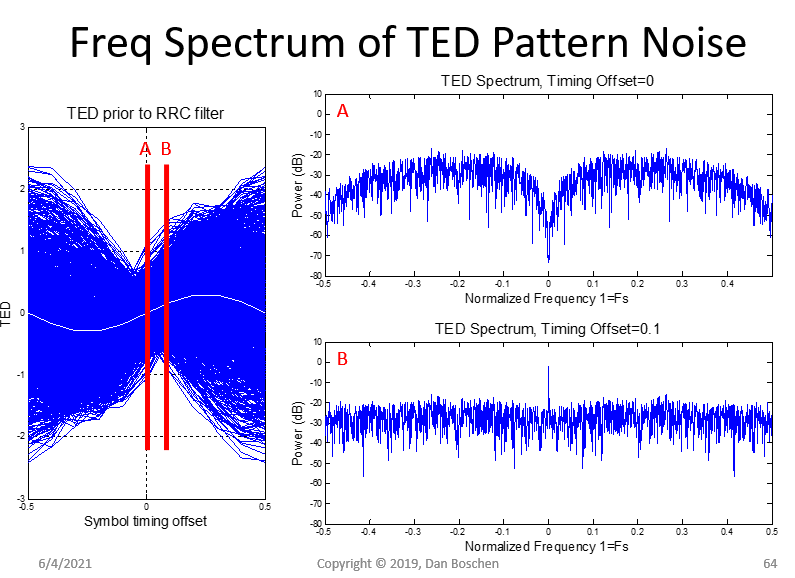 Self-noise in TED is the effect of pulses that are longer than the symbol period $T$.

Consider a noise-free system. If bandwidth is not a concern, you can use short pulses. For example, a (time-domain) raised cosine, or a half-sine pulse. In this case, the duration of each pulse is $T$ and pulses don't interfere with each other; there is no self-noise and Gardner will work perfectly.

In more realistic scenarios, bandwidth is a concern, and you want to use pulses that have duration longer than $T$, such as a raised cosine pulse with excess bandwidth $\beta$. These pulses are designed to have zero ISI at times $kT$, but the rest of the time, there is ISI. This ISI interferes with Gardner and lowers its performance; that is why it is called "self-noise" in this context.

Note that, as the excess bandwidth $\beta$ decreases, the pulse tends to become a sinc, which has very large sidelobes and, in consequence, very large self-noise. Increasing $\beta$ reduces the sidelobes and also the self-noise, at the cost of additional bandwidth use. If I remember correctly, the original paper by Gardner states that the algorithm works reasonably well for $\beta > 0.35$ or so.

Honestly, I have never read about self-noise in contest of TED algorithm.

I think that was introduced as the difference between the error observed by the detector and the expected timing error. For details: I think

Why does self-noise appear?

Because your estimated $e_k$ is not always the same as the expectation $E\{e_k\}$ at the sampling instance; i.e. when you've not already perfectly have locked onto your symbol timing and don't have jitter, then your estimate has some variance.

Is it the same self-noise as it appears in microphone?