Why is Complex Baseband better than Real Representation?

I read that one of the advantages of a complex baseband signal is that it can send more data over the same bandwidth as compared to real signal. Why is that so? If I think about it logically, doesn't complex number operations take more system resources since it has real and imaginary? For example, multiplying 2 complex numbers needs 6 operations (4 multiplication & 2 additions) as compared to only 1 if multiplying 2 real numbers. So why is complex baseband less complex, uses less hardware, and less bandwidth per data?

The efficiency is in spectral utilization, at the expense of hardware complexity. Spectrum is such an expensive resource and the demand for data so great that this is a compelling trade to make. Although sampling rates can be reduced in the hardware, it takes two real data-paths (and as the OP mentioned 4 real multipliers and two adders to implement a full complex multiplier) so there typically is no hardware simplification, but may be a hardware necessity to create given implementations (such as a single-sideband frequency translator as I demonstrate below).

We can see the spectral utilization feature clearly by considering that a real causal waveform in the time domain will always be complex conjugate symmetric in frequency (meaning it will have positive and negative frequencies), so when such a time domain signal at baseband is frequency translated (shifted in frequency) from baseband to a carrier frequency, we will have both upper and lower sidebands relative to that carrier, each with redundant information.

In contrast we can completely eliminate the negative sideband in frequency by using a complex baseband signal (a direct approach is to make the imaginary component the Hilbert Transform of the causal real signal, creating the analytic signal of the real signal $x(t)$ as $x_a(t) = x(t) + j\hat x(t)$.

The complex baseband signal need not have negative frequency components in general to be a spectrally efficient waveform but the above case with the analytic signal directly demonstrates a doubling of spectral efficiency. In general for any high spectral efficiency modulated waveform (such as QAM) there would be a baseband representation at some point in the system as the I and Q components of that modulated signal.

Another compelling reason baseband representation is useful, even on paper before we get to implementation, is the simplification it makes in our understanding and derivation of the signal processing. Complex is so much easier! A great demonstration of this is in understanding a single-sideband modulator as depicted in the block diagram below: 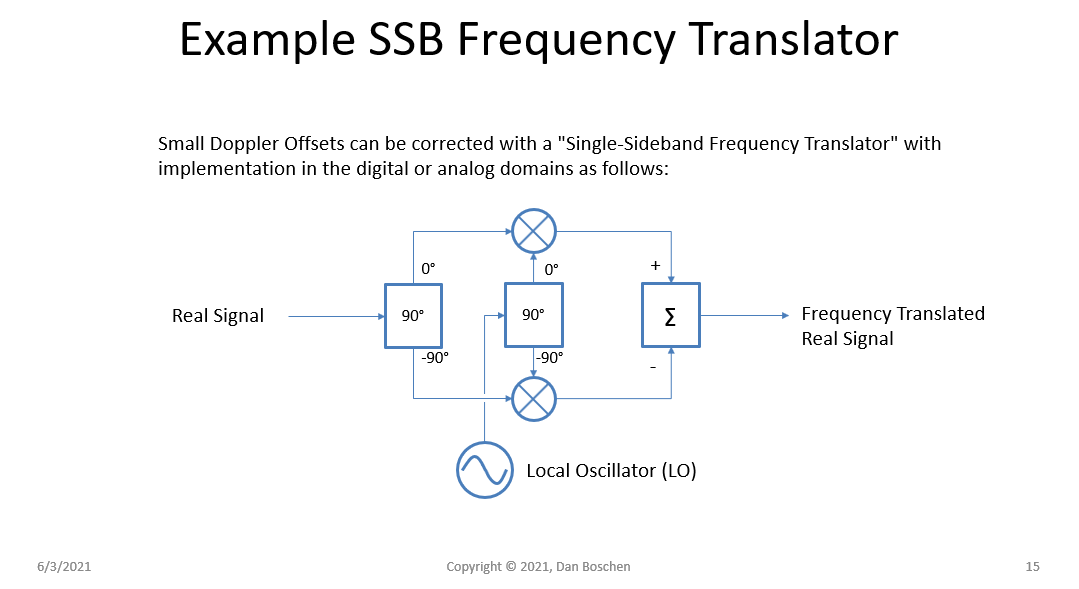 We could proceed and derive the cancellation provided by the quadrature circuits using sine and cosine product relationships or recognize by inspection that the quadrature block (represented by the blocks labeled with 90°) convert our real signals into a complex analytic signal (single sideband). If we had a $\cos(\omega_c t)$ at the input, the first block converts this to the simpler $e^{j\omega_c t}$ which similarly gets multiplied by the analytic local oscillator $e^{j\omega _\Delta t}$ where the frequency shift is apparent by the addition of the exponents in the complex product: $e^{j\omega_c t} e^{j\omega _\Delta t} = e^{j(\omega_c + \omega _\Delta) t}$. Try to explain it that easily with trigonometric sine and cosine identities such as $\cos(\alpha)\cos(\beta) = 0.5\cos(\alpha+\beta) + 0.5\cos(\alpha-\beta)$ with cancellation from the $\sin()\cos()$ case etc; this is hardly intuitive and much more mathematically tedious to go through. 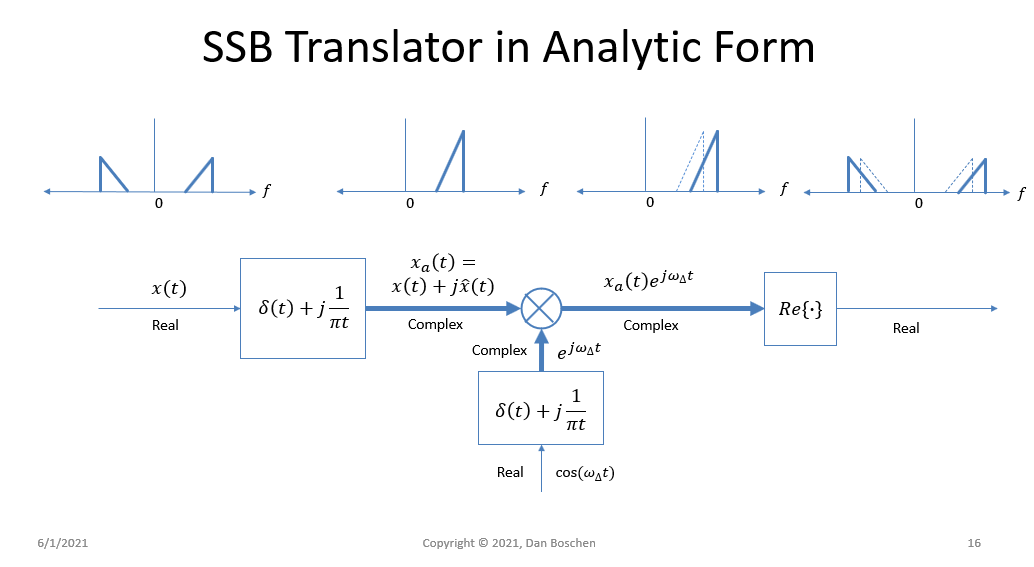 In this case we used complex signal representation not to reduce spectrum further but to simplify filtering or provide small frequency shifts that we would not be able to do without interference, but in the end a real signal was provided as the input and output of this particular system.

A third reason is to consider simulation and modelling of linear systems: The carrier frequency is completely arbitrary in representing the information within the signal, which is captured in the amplitude versus time and phase versus time relative to the carrier (meaning the complex analytic signal!). With a complex signal we can use any carrier including DC, which would require the least sampling rate in a discrete time simulation given we don't care about representing actual values of an underlying carrier that is modulated.

The convenience part depends of what you find convenient, what operations you want to do, and what capabilities the building blocks available to you have. To me, the «complex baseband» is a neat way to analyze the problem, to express everything in a compact, comprehensible fashion such that my own limited memory and math skills can cope with it. Once you actually make a product, you will typically analyze the actual operations and try to remove redundancy such that a «complex» pipeline and a «real» pipeline might converge on the same actual multiplies and adds in the end.

Not the answer you're looking for? Browse other questions tagged complex baseband or ask your own question.

0
Frequency spectrum of complex equivalent Baseband Signal - Frequency Content around carrier frequency
5
How do I convert a real baseband signal to a complex baseband signal?
3
Why would we simulate baseband rather than passband
3
QPSK Data Rate vs Bandwidth at Passband: Why can it only transmit 1 bit per Hz and not 2 bits per Hz?
0
Baseband representation of a LFM chirp signal
19
Efficient Magnitude Comparison for Complex Numbers
3
Sample rates, Samples per Symbol, and Digital Pulse Shaping
0
How to recover data/information from real complex baseband signal?
0
An Impulse in Complex Envelope (i.e. baseband) Notation?