Apologies in advance for asking something so basic, this is not my field at all so I'm a bit lost where else to find this info. I'm trying to understand this piece of code that detects sudden drops in a signal, it goes something like this:

Can anyone tell me what type of filter this is and why does it centers the signal at 0? Just anything to get me started onto more googling would be really helpful. Thanks in advance. 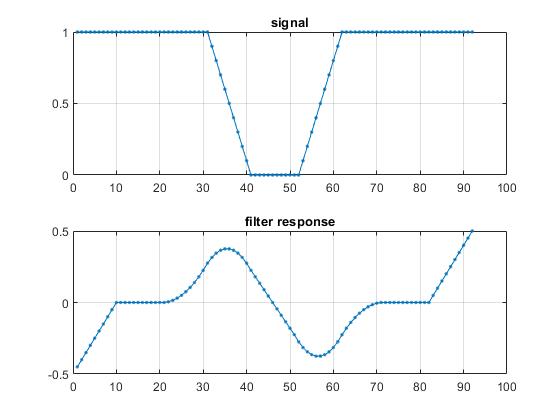 filters filtering
Share
Improve this question
asked May 12 at 11:56

This is a moving difference filter which acts as a discrete time derivative and is less sensitive to high frequency noise. When all the samples in the waveform are the same (DC) the last ten samples will cancel out the first 10 samples for DC cancellation but when a change occurs within a 10 sample interval compared to 10 samples prior the difference will be maximized.

This equivalence form helps provide a more intuitive understanding of the filter with further details provided below:

The basic form of a differencing filter is $y[n] = x[n]-x[n-1]$, with coefficients given as [1 -1] and is a discrete time approximation of a derivative (as the Forward Euler mapping of $s$ which is the Laplace Transform of a time derivative): 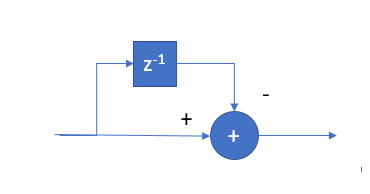 Also consider how the time derivative is $\lim_{T \rightarrow 0}\frac{x(t+T)-x(T)}{T}$ in comparison to the form given above. 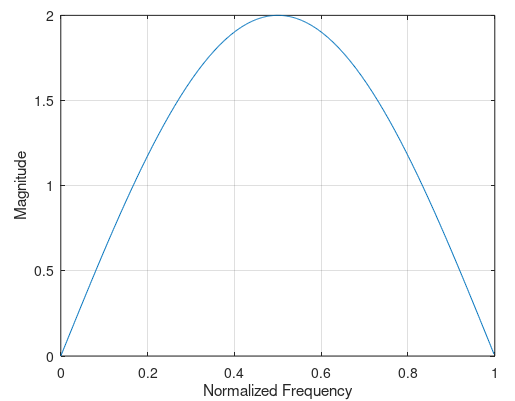 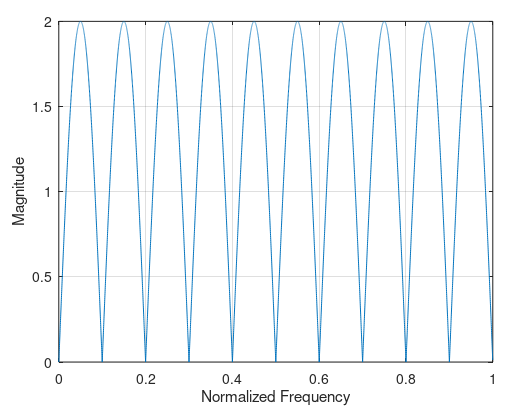 The final response of the OP's filter is found from the convolution (or cascade) of the interpolated differencing filter with a 10 sample moving average filter (which removes the high frequency sensitivity as a low pass filter).
A moving average filter over 10 samples with coefficients given as [ones(1,10)] would have a Dirichlet response which is an aliased Sinc function. This is clear when we consider the coefficients of the filter is the impulse response of the filter, and the Fourier Transform of the impulse response is the frequency response. The coefficients are a sampled pulse, and the Fourier Transform of a pulse is a Sinc function. The response of a filter with coefficients [ones(1,10)] is shown below: 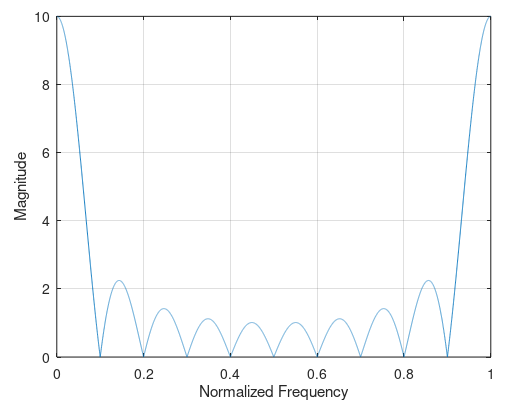 And the final form of the filter as the convolution of the coefficients of the interpolated differencing filter and the 10 sample moving average filter is shown with the response below (omitting the scaling by $0.05$). Convolution in time is multiplication in frequency, and we see that the resulting response is the product of the responses given above: 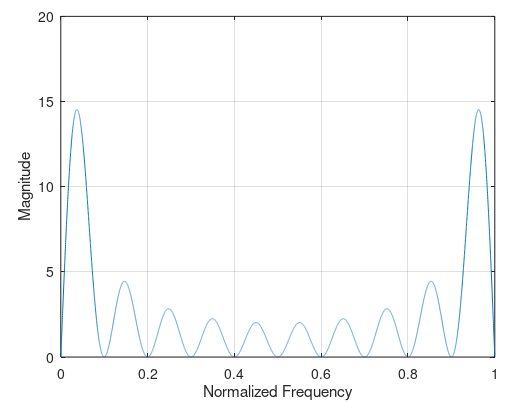 17
Are there any standard implementation forms for tunable Butterworth filters?
1
Adjustable Notch Filter help
5
Help designing Butterworth filter
0
Help me understand the phase of an FIR filter
1
Manual filter or digital filter first for EEG?
1
Separation of signals without loss of information about the signals themselves
0
Help implementing digital filter from tansfer function