What's the point of defining the signal over the whole time domain?

This question is classic for anyone starting with some signal processing course, suppose $y(t)=x(t/2)$ then the system is noncausal because we have that the output at t=-6 depends on the input at t=-3 which is in the future. Suppose the signal is only periodic for positive t, then the whole signal is aperiodic.

But how does it even make sense to write a negative value for time, shouldn't any "real world" signal start at some instant, which we would call t=0, does negative time do anything other than make us refrain from writing too many piece-wise defined functions?

Bottom line: it makes the math easy. In addition, there are certainly instances where we care that a signal has existed for some time in the past.

But how does it even make sense to write a negative value for time,

By extension, $t = 0$ is just any arbitrary moment in time; if you don't like it, shift everything over.

shouldn't any "real world" signal start at some instant

Aside from the big bang, no, why should there be some instant where a signal "starts"?

Note that the concept of signals that exist for all time comes from Fourier analysis. If you have some reason to start considering signals at an instant, there is Laplace analysis, where time pretty much starts at $t = 0$.

does negative time do anything other than make us refrain from writing too many piece-wise defined functions?

Fourier analysis is a good way to analyze signals that are "just there", like radio signals or speech. If your analysis revolves around a system that's in steady state, processing a signal that has had pretty much the same statistics that it has now and will have in the future, then treating that signal as existing for all time is both sensible, and makes the math easy.

Defining time domain signals for all time facilitates the understanding of basic principles and makes solving more challenging problems easier (just as do imaginary numbers, but maybe for the same reasons you have an objection to those as well?). A classic example is the relationship of even and odd functions in the Fourier Transform and how this can be used to understand some key properties with causal signals.

For the Fourier Transform, even real signals in one domain will always be real in the other domain. So an even function of real values in time (meaning symmetric about t-0 and extending to positive and negative time) will have all frequency components in the transform as real.

Similarly odd real signals in one domain will always be imaginary in the other domain.

Given this we can see the interesting property that causal signals, which can be decomposed to be the sum of an even and odd signal will always be complex in the frequency domain. (And for minimum phase systems, the imaginary components are the Hilbert Transform of the real components).

So for the "real world" we can reduce problems to those that are causal as well as time limited (for the same reason we needn't deal with signals that go to positive infinite time!), but having a more complete understanding of the mathematics of signals that extend to positive and negative infinity can lead to our broader understanding and actually simplify the math involved for use in the limited real world cases. There are many cases where the mathematics is simplified by balancing the signal about the t=0 axis, and then once completing all the heavy lifting, shifting the signal to be causal with the additional minor correction involved to get the final and correct answer. 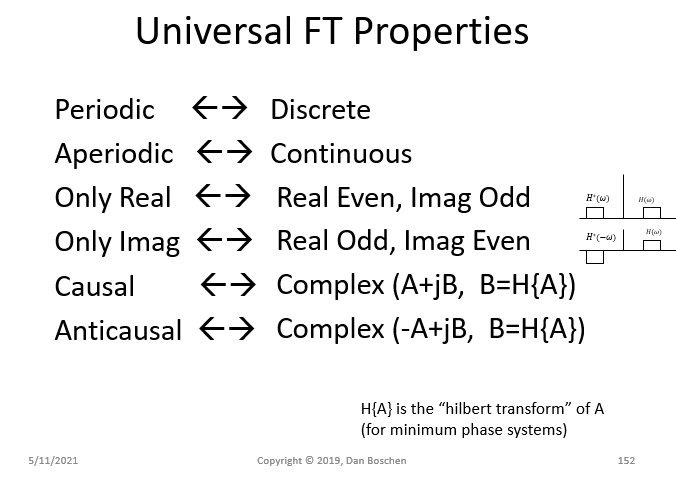 Not the answer you're looking for? Browse other questions tagged signal-analysis continuous-signals or ask your own question.

5
Estimate changing time lag between signals
0
Determine whether a signal is increasing or decreasing over time
4
Does "keying on" a sine wave at a zero-crossing reduce its bandwidth?
3
Trying to write a signal "unsmoothing" algorithm
0
What's the point of using Morphological processing concerning images?
4
Removing step-function like noise from signal, knowing when the step functions occur
1
How do I implement a footstep recognition algorithm? One that recognizes the start and end points of each footstep?
1
Is a continuous time aperiodic signal discrete in the time domain?