Last call to make your voice heard! Our 2022 Developer Survey closes in less than a week. Take survey.

Adding phase noise to a signal results in amplitude variation on a constellation - whats the mistake? *plots inside*

I am attempting to add phase noise to a modulated signal.

where $\mathcal{F}$ is fourier transform, $ \omega$ = 1 MHz, $\mathcal{F}( e^{j \phi(t) }) $ is the double sided phase noise mask on 0 Hz, then also this can be interpreted as a bandwidth $B$ of the upper and lower sidebands of the phase noise centered on 0 Hz (the double sided spectrum in the top left plot below when not in logarithmic x-axis scale). The convolution result is the top right image, symmetric phase noise translated from 0 Hz onto my a oscillator or CW or sine wave at 1 MHz.

The math now being done in time domain:

Up-conversion using the inverse transform of the result above

Down-conversion of the upconversion 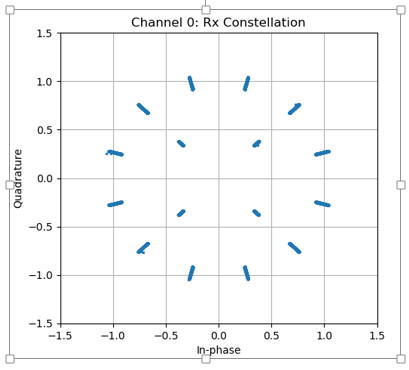 Why is this producing amplitude variation and not phase variation? Is there another way to do this? 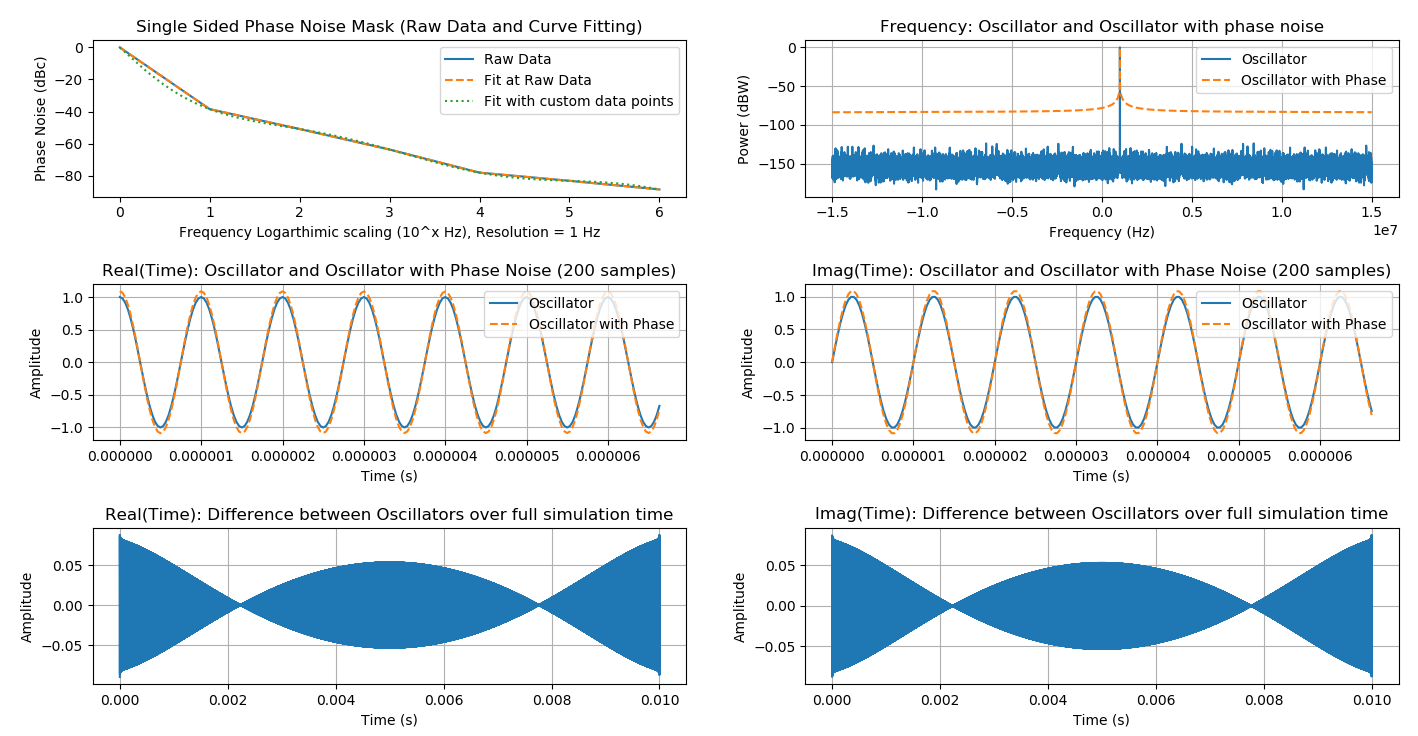 --Edit Updated constellation based on replies below-- 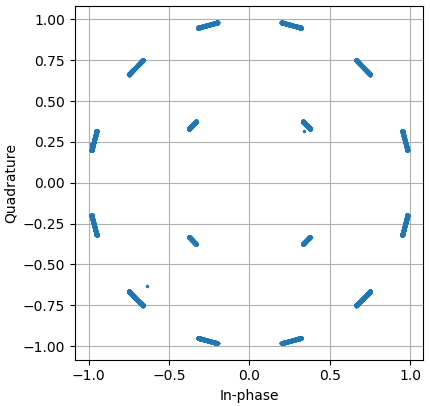 fourier-transform phase modulation frequency-response oscillator
Share
Improve this question
edited May 13, 2021 at 15:28
Villere_DSP
asked May 11, 2021 at 19:26

As the OP has described, the noise as shown is AM noise only as the constellation points are not changing in phase at all. A double sided spectrum with symmetric sidebands in phase with the carrier is amplitude noise:

Consider a reference carrier as 1 at angle 0 degrees for which we do the following to create sinusoidal sideband noise by adding to it a small sinuoid with with $\alpha$:

This is a real waveform which only changes in amplitude and all samples will be of zero phase (AM noise only). We can gain further insight by decomposing the cosine using Euler's Formula (of which the magnitude and starting phase of each are the two sidebands in the Fourier spectrum):

However if the two sidebands were in quadrature relationship to the carrier, then for small $\alpha$ where the small angle approximation holds, the noise will be dominantly phase noise:

For the case of noise density where the noise is relatively small so that the small angle approximation holds, the OP can simply multiply the sidebands representing the noise pattern by $j$, mapping the result to be PM instead of AM. Note from the graphics below that negating half the spectrum (for example multiplying all components in the negative half spectrum by $e^{j\pi}$ or 180°) will also accomplish converting AM to PM (to do this with an FFT use an odd number of bins, multiply all the $(N-1)/2$ upper bins by $-1$ and multiply the DC bin by j to have this come out perfectly): 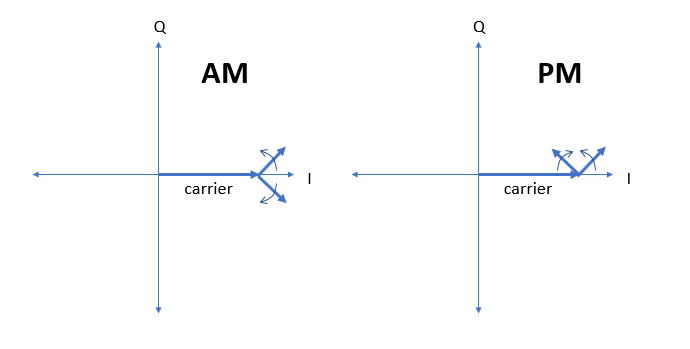 For adding phase noise from a power spectral density in MATLAB or Octave, please see this great function with all that worked out from Alex Bur-Guy:

Not the answer you're looking for? Browse other questions tagged fourier-transform phase modulation frequency-response oscillator or ask your own question.

4
Phase Modulation and Intermodulation Anomaly ? (Spectrum plots inside - **Updated**)
3
How to test I/Q modulation with only one branch (I or Q)?
0
Phase Noise and Multi-carrier Frequency conversion
0
Why can't quantum phase noise in radio astronomy amplifiers just be filtered out after down conversion, instead of down-converting first?