What is phase shift?

"have equivalent magnitude responses but however the second system has a much larger contribution to the phase shift." So what is phase shift?

filters discrete-signals phase
Share
Improve this question
asked May 11 at 14:01

Let the complex frequency response of an LTI system be

The minimum-phase system has the smallest phase lag of all systems with the same magnitude response $M(\omega)$.

Another property of minimum-phase systems is that they have the smallest group delay of all systems with the same magnitude response $M(\omega)$. Group delay is defined as the negative derivative of the phase with respect to frequency.

For a first-order system with transfer function

the phase is given by

Phase shift is often confused with time delay, although related these are two different quantities. In signal processing, phase shift specifically refers to the rotation of a complex number. For example given the complex number $x = Ae^{j\theta}$ which through Euler's formula has real and imaginary components given as $A\cos(\theta)+jA\sin(\theta) = I + jQ$, a phase shift of $\phi$ would rotate $x$ according to:

Resulting in real and imaginary components as: 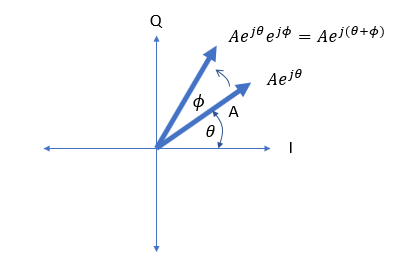 Time domain and frequency domain waveforms can be represented as complex numbers where each sample has a magnitude and a phase. A phase shift would be a rotation of those samples, in either domain (so we can have a phase shift in time, or a phase shift in frequency). A constant delay in time has the property of a linear phase in frequency: the phase shift versus frequency will be linearly increasing in the negative direction for a fixed delay in time. For instance, given the observation of a sinusoidal tone at the input and output of a cable (fixed delay), for an extremely low frequency we would see the result of a very small phase difference between the sinusoid measured at the output compared to the input, but as the frequency is increased, this measured phase would increasingly larger in direct proportion to the increase in frequency.

One of my favorite questions to ask which when answered properly shows this point is really understood is “design a DC source with a phase of 30 degrees”. This drives home the point that any signal including DC can be rotated in phase and that complex signals can and are implemented in the “real world”.

What is an Intuitive Explanation of the Phase of a Signal

How does a shift in time domain result in phase shift in frequency spectrum?

Meaning of Phase response of a filter? In simple words?

Not the answer you're looking for? Browse other questions tagged filters discrete-signals phase or ask your own question.

7
Meaning of Phase response of a filter? In simple words?
5
What is an Intuitive Explanation of the Phase of a Signal
0
How does a shift in time domain result in phase shift in frequency spectrum?

10
Phase Correlation - Poor Performance on Noisy/Blurred Images?
24
How to circularly shift a signal by a fraction of a sample?
2
Phase invariant detection of low frequency spikes
0
Magnitude and phase of $-\delta[n]$?
3
Design a linear-phase FIR filter approximating the magnitude of a given IIR filter
0
what happens If I change the phase and magnitude of a signal
1
Zero-phase-shift filters must be symmetric about the origin
0
Understanding zero-phase filters
3
Why is my resonance phase lag discontinous?
1
On what it means for a system to be minimum phase