On what it means for a system to be minimum phase

From my undestanding I get that when a system's poles and zeros are all inside the unit circle then it means that it's minimum phase. But I don't get how the location of zeros and poles are related to the phase being "minimum" or whatever the "minimum phase" notation implies. So basically I'm asking what does it mean for a system to be minimum phase othen than the zeros and poles part and why was the minimum phase as a name was chosen for this kind of systems.

The minimum phase excursion for a minimum phase system is well demonstrated with the graphic below, knowing that the complex frequency response (magnitude and phase) of an FIR filter can be determined graphically through phasors rotating at a rate according to the coefficient number (the first coefficient rotates zero times, the second coefficient rotates once, etc as the frequency axis is swept from $0$ to $2\pi$). Both filters shown below will have an identical magnitude response, but the one with the larger coefficient appearing first is minimum phase while the one with the coefficients reversed (the reverse filter) is maximum phase. We can see with the minimum phase system how the total phase deviation is minimized, while in the maximum phase case the phase deviation will be maximized, but in both cases having the same magnitude.

When all the zeros are inside the unit circle, the frequency response as equivalently mapped out as in these graphics by rotating phasors will never enclose the origin, thus the phase excursion never exceeds $2\pi$. 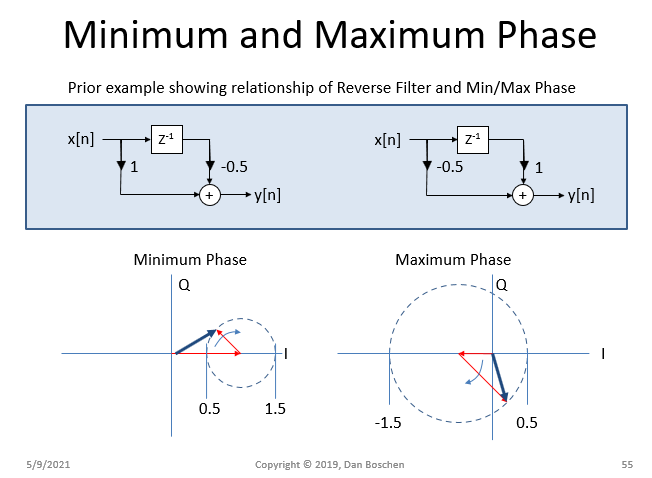 For further details and how this relates to Cauchy's Argument Principle please also see: Can I set a constraint on the first tap of an FIR filter such that its inverse is stable?

Here is another way to think about. Let's look at a transfer function $H(z)$ that has one zero outside the unit circle at a location $z=q$ with $|q|>1$. We can write this as

so we simply separate out the zero. Let's now mirror this zero back into the unit circle:

So you can think of the minimum phase as the one instantiations of a specific magnitude function that has NO all pass components.

Just restating information in above answers, but perhaps in a slightly different way.

The frequency-domain response of a system (or a filter, or signal etc.) at angular frequency $\omega$ is a complex quantity and can be evaluated from the Z transform by substituting $z=\exp(i\omega)$. (Or $z=\exp(-i\omega)$ if you are a geophysicist like me!) This complex response can be written in polar form as $|A(\omega)| \exp(i\phi(\omega))$.

There are a large number of systems all of which have the same magnitude response $|A(\omega)|$ but different phase responses $\phi(\omega)$. For example, the "zero-phase" member has $\phi(\omega)=0$ at all frequencies. This is non-causal (has values before t=0).

Of all the causal systems in the family, the minimum-phase system is the one for which the phase $\phi(\omega)$ is closest to zero (i.e. minimum) at every frequency.

In terms of the time-domain response, the minimum-phase member is the one which is causal and has its energy as close as possible to the start of the signal. (For this reason, in geophysics the term minimum-delay is used interchangeably with minimum-phase.)

Not the answer you're looking for? Browse other questions tagged filters discrete-signals filter-design minimum-phase or ask your own question.

35
What is the true meaning of a minimum phase system?
2
Can I set a constraint on the first tap of an FIR filter such that its inverse is stable?
1
Minimum Phase & maximum phase