Filter odd or even harmonics with notch or inverse notch filter

Hi i had the following question.

I have a signal containing a 200Hz sine wave and it's odd and even harmonics (no other frequencys or disturbing signals are contained). What i'm looking for is a kind of filter which is able to seperate the odd harmonics from the even ones. The end goal is to be able to determine the amplitude and phase of each single of the odd harmonics as accurate as possible. I know that you normally would use an FFT for this purpose but i'm trying to figure out if this wouldn't also be possible with a filter instead.

So i thought about two options: 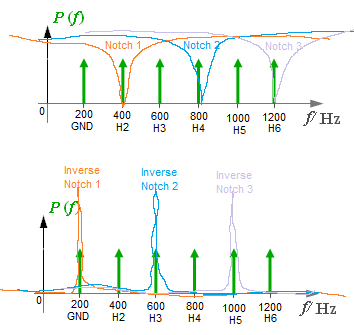 For notch filters i only find spurious and short information like these: https://zone.ni.com/reference/en-XX/help/371325F-01/lvdfdtconcepts/notch_peak_filters/ https://www.onesdr.com/2019/11/21/fm-notch-filters-why-you-need-one-with-most-sdrs/ https://www.youtube.com/watch?v=tpAA5eUb6eo

And the only source of information i found about inverse notch-filter was this paper i mentioned (on top of the second page of the paper): https://www.scirp.org/pdf/_2013060615443504.pdf

So my question is (if i'm not completely on the wood path) which of the both approaches described you would prefer and can you give me some good sources of clear and understandable information about the two mentioned filter types and thier implementation in hardware ? Our would you recommend me a completely different filter type for this task ?

What you are looking for are what we, in the audio space, call comb filters. Comb filters may or may not have a feedback path, just like FIR and IIR filters. In fact, there is a generalized theory about designing comb filters based simply on designing any digital filter.

In fact, you can think of every LTI digital filter as being a comb filter where the teeth of the comb are spaced apart by the sampling frequency. To space the teeth apart by a frequency spacing much less than the sampling frequency, you need a delay element that is longer than a single-sample delay ($z^{-1}$). If a delay with precision of an integer number of samples is good enough to tune your comb filter, good for you. But if it isn't, you need to deal with interpolation and precision delay.

If the OP is actually interested in selecting only one individual frequency from the even or odd harmonics, then a moving average filter (MAF) would be ideal since this can provide a null at every other frequency when the frequencies are harmonically related. The low-pass MAF with all the coefficients as 1 will pass DC at $f=0$ and provide nulls spaced by $1/T$ Hz where $T$ is the total duration of the filter in seconds. This means for a filter $N$ taps long sampled at sampling rate $f_s$, the nulls will be spaced by $f_s/N$, so selecting a sampling rate that is an integer multiple of the harmonic would provide for the simplest solution.

The low-pass can be converted to a bandpass such that any frequency is selected by rotating the filters coefficients using the following for each coefficient $n$ with $n$ going from $0$ to $N-1$ total number of coefficients in the filter:

(This is identical in form to a bin in the DFT, and the DFT can similarly be shown to be a bank of such filters: (see Magic of twiddle factor in DFT). 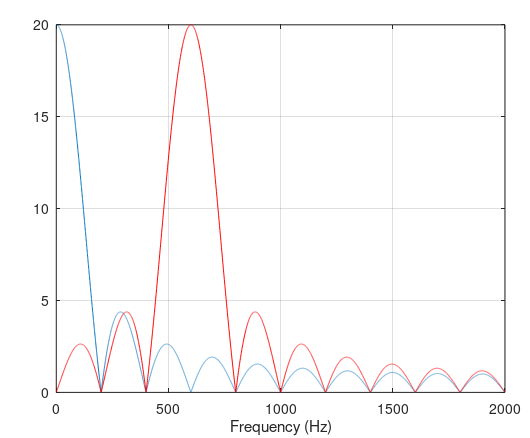 If all even or all odd harmonics were desired to be passed through, this would be very simple to do with an interpolated sum and difference FIR filter (which is a comb filter given the frequency response has "teeth" like a comb) if the sampling rate can be an integer multiple of the fundamental frequency 200 Hz (or as described above implemented with an all pass delay structure instead of sample delay elements).

First note below the basic form of a sum and difference with a single delay:

Adding more delays is identical to zero-insert interpolation, which causes the spectrum to replicate for every zero inserted. For example with one additional delay, the filter responses would appear as below:

For the OP's case, and depending on how many harmonics are desired to be processed, we could for example set the sampling rate to be 4 KHz and then use 4000/400 = 10 delays to result in the following solution providing even and odd notches up to the Nyquist frequency of 2 KHz while providing a maximum response at exactly each desired harmonic:

Mathematically the above forms result from the factoring of the polynomials $z^N-1$ and $z^N+1$ which complex N roots in either case are evenly spaced around the unit circle. The first case with a subtraction includes a root that is exactly at $z=1$ while the second case with the addition has $z=1$ equidistant between two of the roots. These roots are the zeros of the filter and the unit circle is the frequency axis, resulting in the frequency response patterns shown.

Not the answer you're looking for? Browse other questions tagged z-transform transfer-function digital-filters bandpass inverse or ask your own question.