I have an aperiodic signal of an s-shape in the time-domain that I would like to filter and calculate the derivative of using the FFT. The jump at the end of the s-shape has, of course, a strong influence on the obtained amplitude spectrum. I am trying to eliminate the influence of the jump without giving less weight to the beginning and the end of my measurement by applying a window function.

Hence, as a first shot in the dark, my idea was to "brute force" the signal to be periodic by mirroring the s-shape at the end of the measurement, yielding a "bell curve". This approach yielded significantly improved results in the filtered signal and achieved a good approximation for the derivative. I am quite glad that this approach works and it helped me make a lot of progress recently.

However, I am still puzzled about why this approach works in the first place. Shouldn't the mirroring operation on my input signal significantly influence the output? Is there a theoretical reason for this approach working that I have overlooked?

Thank you in advance for all your thoughts and explanations.

Edit: I included a simplified example of what I did to brute force the periodic signal. As can be observed, the orange curve (ideal measurement without measurement noise) has an s-shape and ends abruptly at a certain value. I mirrored the curve around its last value to force a periodic "bell curve". 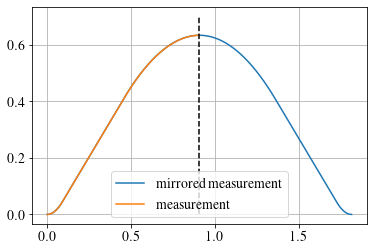 First and most significantly it minimizes the end discontinuities which are visible by creating the equivalent periodic waveform. The Fourier Transform result for the finite duration waveform is equivalent to the transform for the same waveform periodically extended for all time (the non-zero Fourier results specifically). This visualization is useful to more intuitively understand the effect of the discontinuities in an equivalent continuous-time sampled context: very high frequency components are needed to transition in a very short period of time; these high frequency components alias back to lower frequencies for a sampled system and we can see the result as “spectral leakage”).

This second point is an outcome of the theorem that the Fourier Transform of a real valued sequence is conjugate symmetric (so equivalently the Fourier Transform of a conjugate symmetric sequence is real), and is just describing how the result becomes linear phase (real plus an additional time delay so then complex with linear phase). Most significantly the OP has reduced the aliasing effects from the otherwise very large discontinuity in time while the original time domain sequence is completely recoverable from the frequency domain, so less prone to distortion effects with any subsequent processing in frequency prior to transforming back to the time domain, and noted that this was done without modification to any of the original time domain samples (as would be done with windowing). This was feasible since the derivative of the original waveform was zero or close to zero at the edges, thus minimizing the discontinuity in the equivalent periodic waveform after adding the mirrored component.

8
FFT of image data: “mirroring” to avoid boundary effects
0
Fourier transform of a periodic/aperiodic signal
1
Spectral filtering
1
Calculate amplitude in dB and dBA from audio signal
0
Windowing of signal before FFT
0
How to interpret a spectrum with FFT mirroring?