Decision directed TED (timing error detector). What does it mean?

I am reading about symbol rate recovery and there is a term that I didn't grasp - 'decision directed' TED. Can somebody explain what does it mean or provide me with accurate reading? Thanks

"Decision directed" means that the inputs to the timing error determination use decisions (best guesses) of what the ideal symbol is based on the sample read.

This is in contrast to "symbol-aided" where a known symbol is transmitted and the replica symbol can be used in the receiver. You can visualize how this would allow for much further error determination due to a much wider range before the results alias.

I have diagrams specific to phase detection, but well demonstrates the concept and utility of decision-directed approaches applicable to timing recovery as well. As an example of this for the purpose of phase detection (used in carrier recovery) below shows a Decision Directed Phase Detector for QPSK and showing at the ideal sampling location in the symbol the actual sample measured at $V_2$ from which we assume (best guess) that the symbol transmitted must have been $V_1$. This is just an assumption based on nearest neighbor and only serves to drive the correction loop to that state, even though the whole symbol may end up being rotated once that correction converges (and then other techniques such as pilot symbols or higher level inspection or the data itself can be used to determine if such rotation occurred). 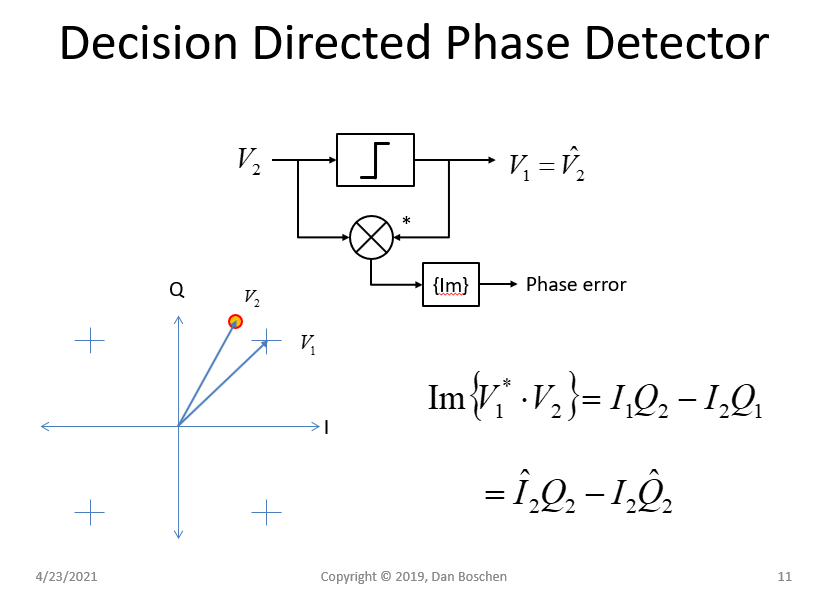 In contrast below shows a QAM Constellation where a symbol-aided approach is used for phase detection. The lock range as limited by the nearest-neighbor feature of a decision directed approach is greatly extended as depicted in the figure where this shows an actual symbol received as the dark circle and based on the known location (the outer symbol at +45 degrees) a much greater error can be determined. In a Symbol-Aided approach the known symbols are transmitted over a portion of the symbol such as in a pilot which is then used for carrier and timing recovery, and can operate in much lower SNR conditions. Decision-directed approaches out-perform other approaches at higher SNR levels where all samples are based on the received signal itself (such as the Gardner TED which typically does not use a pilot or decisions) since a decision when good removes all noise for that input to the timing detector.

1
why does the decision boundary change in BPSK? is it true?
7
Location of Matched Filter
1
Phase ambiguity in QAM modulation
0
Blind Carrier Synchronization
1
Offset in Carrier and Timing
0
What is Self-noise in TED algorithm
0
Does Maximum Likelihood detector (QAM symbol detection) enhance BER?
0
What is meant by channel knowledge? Difference between partial and full?