Impulse response for an LTI system

I'm new to signal processing and working my way through a textbook. There is an exercise where a causal LTI system is given that responds to a rectangular pulse.

with a triangular pulse.

One task is to find out what the impulse response for this system is. The solution is

where $\epsilon(t)$ is the unit step function, $\delta(t)$ the unit impulse function.

I don't really understand the solution and how it turned to an endlessly oscillating rect pulse. Unfortunately, the textbook doesn't explain its approach. So, why does the output signal looks like this?

b) What is the unit step response?

c) What is the impulse response?

And the solutions for a) - c) from the textbook 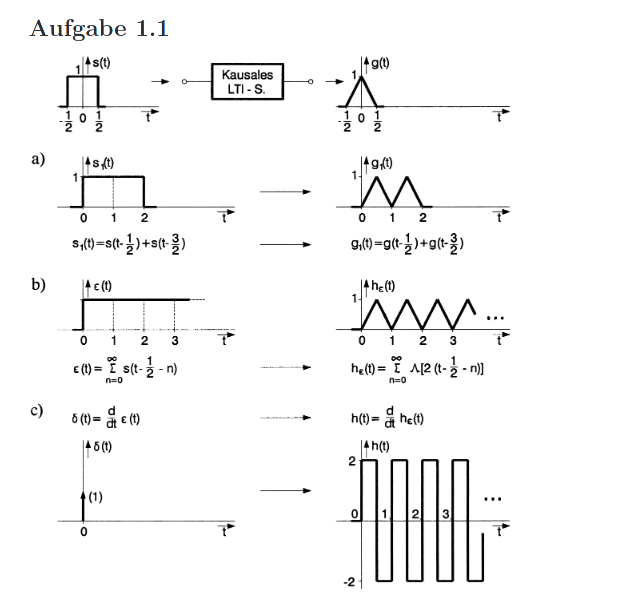 The corresponding spectrums (apart from linear scale factors !) are :

eliminates the associated problem, as the output spectrum becomes:

which includes all frequencies except at those $\omega = 2\pi k$. Thus the missing frequencies at the input are also missing at the output.

Hence, I would like to assume that there was a typo at the duration of the triangular-pulse output $g(t)$, and that otherwise the analysis based on LTI remains valid... Thanks to RBJ for the reminder... EDIT-1-ENDS

EDIT-2 : However, now happens another problem. If the system is to remain LTI (so that subsequent analysis remains valid), then $\hat{g}(t)$ (the redefined $g(t)$) should be used in the remaning progress. But then the observed waveforms in the figures will be different from what's being drawn. Most notably, the step-response obtained in part-b, becomes a flat output (a unit-step with finite length triangular tails), and finally the impulse response found as step-response's derivative will be a single rectangular-pulse at the origin (and one more at positive infinity) and not a periodic waveform.

So I think the problem should be completely redefined to make any sense...

Your system is stated to be causal and LTI. And an example response for a single rectangular-pulse input $s(t)$ is provided to be a single triangular-pulse output $g(t)$:

where $h(t)$ is the impulse response of the LTI system, and $\star$ denotes convolution.

The followings are easily deduced from the properties of LTI systems:

then from the LTI property, conclude the output as:

the output for $s_1(t)$ consists of two triangular pulses repeated (and the origin is shifted).

incidentally, the signal $\epsilon(t)$ is a unit-step function, and the corresponding response $h_{\epsilon}(t)$ is known as step-response of an LTI system.

Not the answer you're looking for? Browse other questions tagged linear-systems impulse-response step-response or ask your own question.