Get the transfer function when using the "designfilt" command in MATLAB

To put things into perspective, I initially had these four graphs in MATLAB, whose data were sampled with a rate of 10 samples/sec :-

I wanted to remove some of the spikes on the blue graphs, so I thought about making a lowpass-filter that would take care of that. I used the command d = designfilt('lowpassfir','Filterorder', 5, 'CutoffFrequency',0.1,'SampleRate',10) . I then put the data from the blue graph through the filter, and plotted again. Now they look like this:-

As can be seen, some of the spikes have been removed and the graph have been smoothed out, which is what I desire. However, now I want to get the transfer function for the filter, but the only output I get in MATLAB is

If not, how can I get the transfer function from my designed filter?

Also, I didn't rigorously derive the arguments for the designfilt command (filterorder, cutoff frequency) I just guessed at some appropriate values.

The filter is a discrete FIR filter, so the transfer function would be given as:

Which creates a plot similar to what I have done using Octave below for these coefficients: 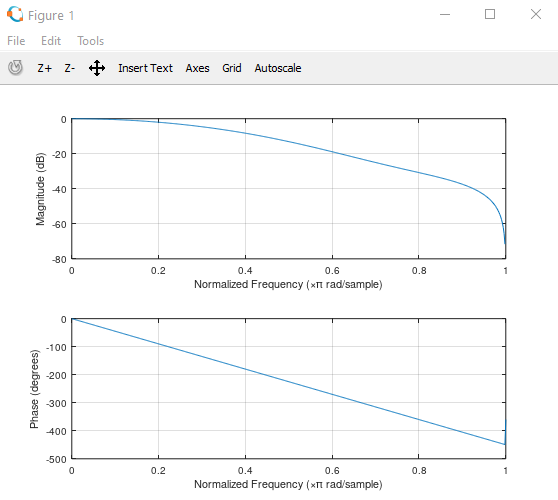 The frequency axis will be normalized to the radian angular sampling frequency, but you can refer to Matlab's documentation for other parameters that can be passed in to freqz to scale the frequency otherwise.

Not the answer you're looking for? Browse other questions tagged matlab filters lowpass-filter transfer-function or ask your own question.