Does the Nyquist frequency of the cochlear nerve impose the fundamental limit on human hearing?

The bandwidth of human hearing by empirical data is $20 \; Hz$ to $20 \; kHz$. A cochlear implant stimulates the auditory or acoustic or Cochlear nerve directly so that the hearing can be improved in the case of stimulation mechanism upstream of the Cochlear nerve has degraded.

Let us assume that the ear mechanism has not degraded (such as in a young and healthy adult). The Cochlear implant can likely improve hearing, even in this case, by increasing the bandwidth by amplifying the effect of the ear drum vibration (sensor actuation). However the neurons connecting the Cochlear nerve to the hearing region of the brain have an upper limit on the sampling rate on the order of $1 \; kHz$.

Does the the Nyquist sampling theorem limit the superhuman hearing and sound localization capability made possible by a Cochlear implant? 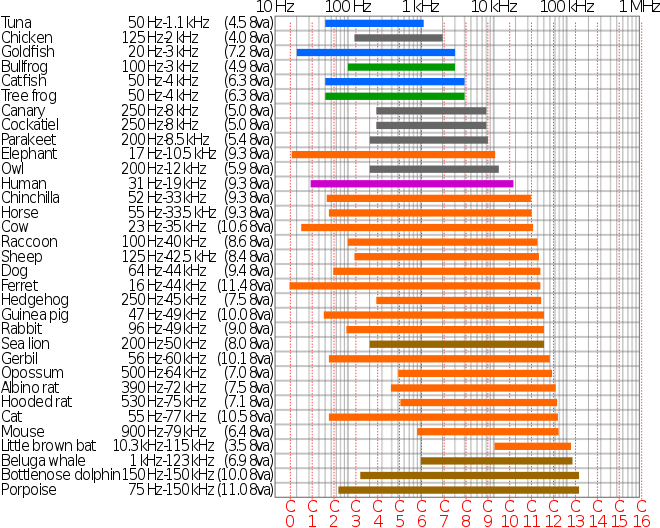 Does the Nyquist frequency of the Cochlear nerve impose the fundamental limit on human hearing?

So in essence the Basilar Membrane performs sort of a mechanical Fourier transform. The frequency selectivity of the Neurons is NOT determined by the firing pattern but simply by their location. A neuron at the beginning of the basilar membrane is sensitive to high frequencies and a neuron at the end detects low frequencies. But they are more or less the same type of Neurons.

The Nyquist criteria doesn't come into play at all since no neuron is trying to pick up the original time domain waveform. The couldn't anyway: human neurons have a maximum firing rate of less than 1000 Hz and average firing rates are way below that. The firing rate of a cochlea neuron represents "Intensity at a certain frequency" where that frequency is determine by the location of that specific neuron.

So you can think of it as a short term Fourier Transform. Instead of a single time domain signal you get a parallel stream of frequency domain signals where each individual signal has a much lower bandwidth.

A cochlea implant basically does the short term Fourier transform internally and then connects the output for each frequency range to the "matching" neurons in the cochlea nerve. Theoretically you can create ">20 kHz" hearing with an implant that can actually receive and process higher frequencies and simply routes them to existing neurons, i.e. you could feed 40 kHz activity to the 10 kHz Neuron. The human would have a sensation when exposed to 40 kHz but it's unclear what they could do with that: they would have "relearn" how to hear. Aside from the highly questionable practical and ethical issues, it probably wouldn't be useful. In order to get to 40 kHz you'd have to give some other frequencies, and chances are that evolution has chosen the current "normal" range for humans pretty carefully.

The auditory system encodes sound in frequency domain, i.e. the activation levels of auditory nerve fibers represent the amplitude or energy in a frequency band assigned to that particular fiber. The ear itself does the transformation from time to frequency domain.

If you somehow modified the ear itself to be sensitive to higher frequencies, the output axons would have no problem handling that, because the frequency information is encoded in the selection of the axon, not in its firing rate. Modifying a functional ear is generally frowned upon, but if the ear is non-functional, it's all bets off. E.g. a cochlear implant can give you decent echolocation abilities if it has wider input bandwidth and maps this wider frequency range to the existing axons. With a suitable (even purely mechanical) clicker that produces short acoustic pulses, you can "see" with your ears. Humans have some rudimentary echolocation ability even without such aids - it requires practice to be able to use it, of course. Widening the ear's functional bandwidth improves the spatial resolution.