I have the question to derive:

which describes a high pass filter or $CR$ circuit with $x(t)$ the input and $y(t)$ the output.

I am really struggling to derive this

I start with Kirchhoff's voltage law

I then substitute this in to Kirchhoff's voltage law

This is the same workings out as for a low pass filter (RC circuit). Is this correct?

If so how do I get to the initial equation?

An example RC high-pass filter circuit is given below: 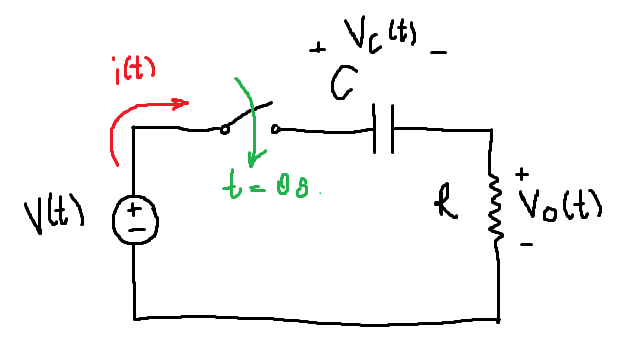 Actually, this filtering operation depends heavily on the capacitor’s properties for varying frequencies. The formula of a capacitor’s capacitive reactance which represents its resistive nature for varying signal frequencies is given below:

So, in the light of these knowledge, let’s analyse the given circuit.

If the Kirchhoff’s voltage law is applied on the circuit, we get;

If the assignments $V(t) = x(t)$ and $V_O{(t)} = y(t)$ are done in order to involve classical input and output notations as in the systems, the equation becomes;

If the time derivatives of the both sides of the last equation is taken, the resultant equation becomes;

According to this differential equation which describes the input-output relationship of the given RC high-pass filter, the frequency domain analyses can be done.

The same process can be followed when analysing an RC low-pass filter too.

Not the answer you're looking for? Browse other questions tagged filters highpass-filter differential-equation or ask your own question.

2
Differential Equation of a Band Pass Filter
1
Find the Differential Equation of an Analog Band Pass Filter
1
Complex band pass filter
1
Filter difference equation and impulse response
9
Digital filter coefficients from low-pass to high-pass
0
Difference between filters in serial and parallel
0
Should we use a digital low pass or high pass filter to remove sensor bias?
2
Why is particular solution zero for an impulse excitation signal?