After reading two articles on signal processing stack exchange:
On coloured Gaussian noise
How the white and colored noise differ in time domain

I do understand that variance do not change over frequency (or time) for colored Gaussian noise.

Now, I would like to compare the random process $y_n$ to $w_n$. First, we know that their variance are identical to $2\sigma_n^2$. Second, although $y_n$ is colored Gaussian and $w_n$ is AWGN, their PDF must look the same, because they are still Gaussian process.

The next thing I thought about is the difference between certain sequences of $y_n$ over time. For instance, if $y_n$ has a high frequency pattern (i.e., transition density of 1) for $n=1\cdots 100$, then it may temporarily have a higher variance for this particular high frequency pattern. But soon I realized that this argument does not make sense neither since Fourier transform does not care about behavior of $y_n$ for some local pattern.

If anyone can give me any good insights about the meaning of PSD for the example above, I would be greatly appreciated!

Please let me know if anything is not clearly in the above. English is not my first language so there is a very high chance I did not explain things very clearly. 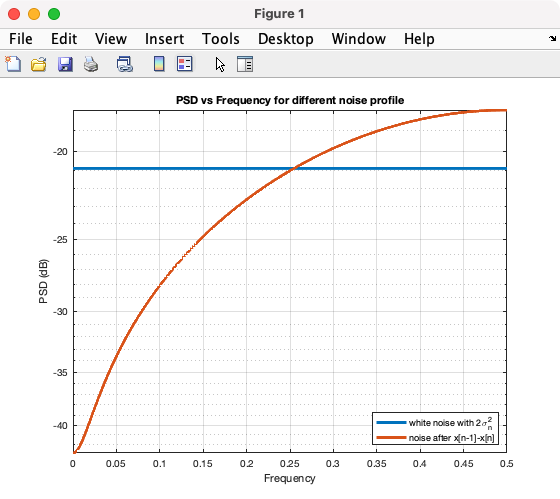 Think in terms of noise realizations. When your head is full to the brim of covariances and multivariate Gaussian variables, generate a Gaussian white noise realization of length N, and create, using this sequence, a sequence $y(n) = x(n) - x(n-1)$. Let us call the latter a blue Gaussian noise realization. I plot histograms of these sequencies which show how many values fall into each bin, those bins uniformly partitioning a range of $y, x$ values. 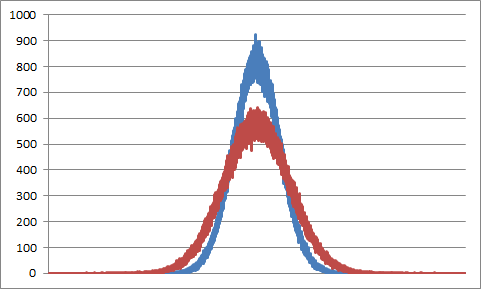 In compliance with your convention, a blue colored graph represents the white noise data, a red colored, the blue noise data. This histograms visually agree with your observation that

Each histogram plotted here is an approximate representation of the distribution of noise signal data, id est, the Probability Density Function of noise signal. The realization sequence's length N is 220 samples. The longer sequence length gets and the greater bin size gets, the closer these numerical PDF graphs resemble theoretical curves.

Go on to Power Spectral Density. Here are discrete Fourier transforms (actually, FFTs) of our white-noise and blue-noise realizations, squared and plotted. Color scheme according to your convention (white noise in blue, blue noise in red): 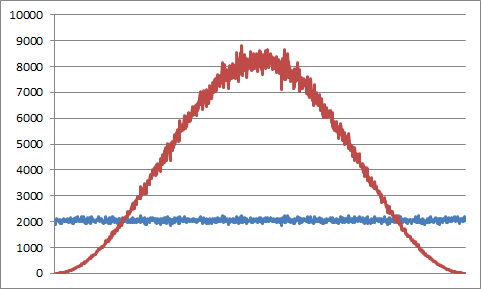 A white-noise PSD (blue graph) is near-constant, a blue-noise PSD graph (red graph) is two symmetrical parabolic segments sewn at 1/4 and 3/4 of the entire range (the shapes are revealing $\omega$ squared function and FFT mirroring). The high-frequency end is in the middle of horizontal axis.

No relationship between variance and PSD is revealed in our calculations and pictures. It appears that these concepts are things that can only be related indirectly, using formulas that have yet to be derived at this stage of learning.

Variance 'measures how far a set of numbers is spread out from their average value' (Wikipedia). Variance is defined in the time/space domain, and this definition never mentions frequencies or wavenumbers or Fourier transform. Although variance can be measured for any "set of numbers", in many signal processing scenarios said set of numbers is almost synonymous with sampled noise values.

A PSD thing, on the contrary, belongs in the frequency domain. The article in Wikipedia states from the beginning

According to Fourier analysis, any physical signal can be decomposed into a number of discrete frequencies

PSD of the signal describes the power present in the signal as a function of frequency. PSD of noises is a specific case of PSD of signals in general.

So variance and PSD are sort of "orthogonal" concepts; whatever, variance cannot be a function of frequency in any meaningful way, while PSD is. 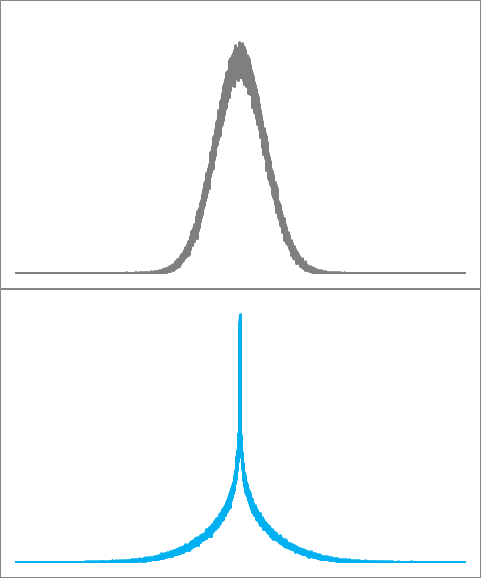 PS There is a number of Guassian Process tutorials on github and elsewhere, mostly Jupyter notebooks. See, for example, https://peterroelants.github.io/posts/gaussian-process-kernel-fitting/.

Not the answer you're looking for? Browse other questions tagged gaussian statistics or ask your own question.

4
How Does Gaussian Blur Affect Image Variance
1
Does the Wiener–Khinchin-Einstein theorem hold for non-Gaussian processes? If so are there any assumptions?
1
How to determine variance/std deviation of Gaussian noise from measured data
5
How Does the RMS of White Noise Change with Sampling Frequency?
2
What's the relationship between the parameters of this noise generator and the gaussian curve it produces in the frequency domain?
3
Noise PSD and sampling rate relation
4
PSD of complex white gaussian noise
2
Integral over power spectral density