OFDM use a pulse shaping filter or not?

The purpose of pulse shaping filters is not to overcome ISI as is implied in the OP's question. The only reason for using a pulse shaping filter is spectral efficiency, and in the process ISI can be introduced if not done properly. In order to limit bandwidth, pulse shaping must extend the time domain response for each pulse beyond a symbol boundary, but can be done such that the response passes through zero at the symbol decision location of ever other pulse (Nyquist shaping filter, raised-cosine filter etc).

A rectangular pulse in time is a Sinc function in frequency, with the main lobes of the Sinc that roll-off at only 1/f (20 dB/decade) as shown by the blue spectrum for a single-carrier rectangular pulse modulation in the plot below. The red spectrum shows the significant advantage is spectral containment by pulse shaping: 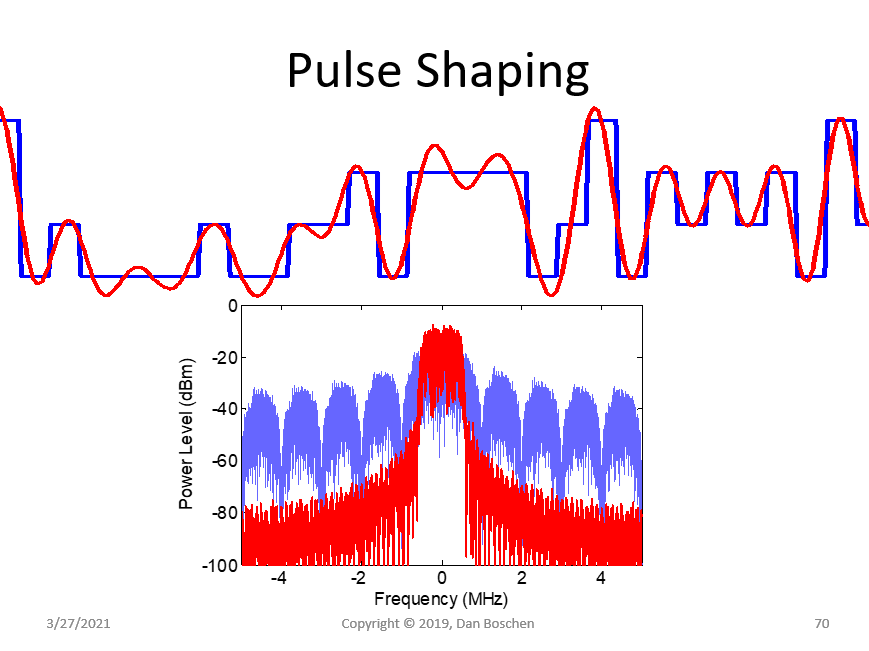 Notice this about the plot above to see intuitively why we are less concerned with using pulse shaping for OFDM (or when we may want to consider its use). The blue spectrum above is rolling off at 1/f where f is proportional to the symbol rate. If we reduce the symbol rate for a single carrier by a factor $N$, we equivalently increase the rate of frequency rolloff by that same factor. OFDM converts a single carrier modulation into $N$ sub-carriers, each representative of the spectrum above in blue, each with much reduced bandwidth individually and therefore overall the resulting waveform extends much less in frequency beyond its primary occupied bandwidth as given by $NR$ where $R$ is the symbol rate of each of the sub-carriers.

So to recap that with the plot of the blue spectrum above as an example: Here we see the result of a 1 MHz symbol rate (1 MSymbol/sec) single-carrier modulation, and notice within the range of the plot the spectrum rolls off to about -35 dB at 5 MHz offset. Consider if we instead sent the same amount of data by using 64 carriers, all reduced in rate by 1 MHz/64, and spaced in frequency by the same (with is orthogonal carrier spacing). The resulting spectrum would dominantly be in a 1 MHz span of frequency, with the carriers on the ends contributing the most to the spectrum going beyond that range, and specifically we would expect about -35 dBc at a 5 MHz/64 = 78.125 KHz offset. That, without any additional pulse shaping, wouldn't appear very different from the red plot above (which is a single carrier pulse-shaped waveform)!

If we wanted to make the spectrum even tighter (with the diminishing return of benefit), we could certainly apply pulse shaping to reduce the adjacent leakage terms accordingly, but in the process of doing that we would destroy a key feature of OFDM which is the orthogonality between all the sub-carriers. Consider the spectrum of any single carrier QPSK/QAM modulation with rectangular pulses (no further pulse shaping): This is a Sinc function in frequency with each null spaced by $1/T$ where $T$ is the pulse duration. When that modulation specifically is used for each OFDM subcarrier (as is typically the case), then those nulls end up being centered on every other subcarrier- orthogonal! As soon as any pulse shaping is applied, the nulls spread wider in the frequency domain and thus the precious orthogonality feature is lost.

OFDM itself doesn't use a pulse shaping filter. The spectral shape is inherent.

Not the answer you're looking for? Browse other questions tagged filters digital-filters ofdm bandwidth channel or ask your own question.

1
How to convert discrete-time QAM pulses to a continuous-time signal using the IFFT (for OFDM)?
0
Limiting Bandwidth for QAM and OFDM signal in MATLAB Simulink
0
OFDM signal in time and frequency domain and its PSD

12
How is symbol synchronization with OFDM done?
4
Why does OFDM use cyclic-prefix while QPSK uses root-raised cosine filters?
2
Cyclic prefix vs. guard interval. Why use one over the other?
0
OFDM Transmitter knowledge
0
OFDM. Cyclic Prefix and ISI
0
what is OQAM (Offset QAM) and why it is required?
0
Spectral efficiency of with OFDM vs without OFDM?
1
What is the difference between a guard band and a cyclic prefix in OFDM?
0
Pilot-based channel estimation in OFDM systems with fractional delays
0
Does non-orthogonal multicarrier modulation use pulse shaping?