Signal that destabilises a positive feedback path with nonunity feedback

I am just starting to learn about feedback systems. There are a few questions that have me stumped, this being one of them. Could someone please help? Thanks!

Question: Find a signal that destabilizes a system with a delayed positive feedback path and nonunity feedback gain.

My understanding so far is that we are reintroducing the output as an input into the system with a positive coefficient. So if the input is positive, the signal with be amplified. Nonunity feedback gain means only a fraction of the output is being fed back into the system. Is that correct so far?

Now we want to find a signal that is destabilised by this feedback system. That means the original signal should be stable.

First understand the concept of a transfer function as the frequency response for a basic two port (one input / one output) linear system; the transfer function defines the magnitude and phase versus frequency of the output compared to the input. This is often given in terms of the variable "s", but to avoid going down that path I am going to present it as a function of frequency only ($H(f)$). Below shows an example system with a plot of the magnitude and phase versus frequency as given by the $H(f)$ equation. This shows us for any particular frequency at the input, what the amplitude of it will be at the output and what the phase shift will be between the input and output: every frequency will be transformed by the system by changing its amplitude and phase shift only, as long as it is a linear system no other frequencies will be created so this is a nice compact description that we will ultimately use to determine stability in a control system. 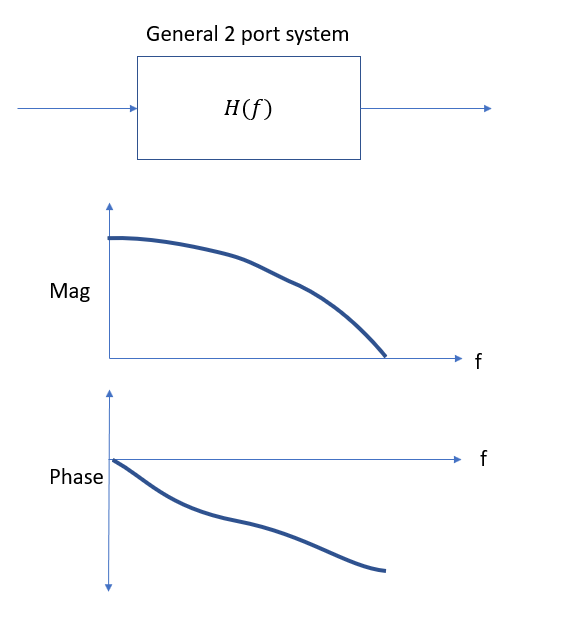 Now consider the simplest case of a system with feedback as diagrammed below with input given as $X$ and output given as $Y$ with the output fed back and subtracted from the input:

The relationship between $Y$ and $X$ is easy to show with simple algebra, with our goal to describe a new transfer function of this new closed-loop system. The new transfer function would be given as $Y/X$ (output divided by input). I don't show it below to not clutter the simplicity of the equation but $X$ and $Y$ are also functions of frequency as $X(f)$ and $Y(f)$, so would be the Fourier Transforms of time domain signals:

The above equation would adequately describe our new closed-loop system as long as it follow the Nyquist Stability Criterion. To really show this completely to cover all cases, the OP needs to first understand the Laplace Transform and the generalized transfer function as a function of s (as in $H(s)$), but here in this simple introduction we can reduce it to a condition that is covered in most cases: that is if the gain of the system given by $|H(f)|$ is less than one before the phase of the system given by $\angle (H(f))$ exceeds 180°, the system will be stable and will have its own closed loop transfer function given by the expression above. We can see this through an iteration of a simple case with H(f) = -.8 at a particular frequency (gain = 0.8 and phase = 180°).

With closer inspection we see that this is a geometric series:

If the gain of $H(f)$ exceeded one with the phase 180°, we would see how the same geometric series would not converge, as an example of an unstable loop.

This gives a very basic simplified explanation to help aid in an intuitive understanding, but further proper study would be to understand the Laplace Transform and complex systems, and the meaning of poles and zeros in the s-plane, and how a stable system must have all of its poles in the left-half plane, and ultimately the full details of the Nyquist Stability Criterion.

Not the answer you're looking for? Browse other questions tagged feedback or ask your own question.

4
Acoustic feedback detection algorithm
1
Allpass filter feedforward/feedback design and code
3
What is the Reference in Control Theory?
0
Feedback systems & oscillations
0
Calculating an in-loop signal as part of a hierarchical control loop
3
Is there any solution for this bandpass feedback overload problem (besides increasing sample rate)?
1
Determine stability of feedback system from open loop transfer function and Nyquist stability criterion gives different results
0
How does the intuitive notion of causality fit in with control systems?
2
How to modify zeros and poles in a delta-sigma modulator loop?