1 - If I look at the spectrogram of the signal calculated using stft windows of the length of 5 min and no overlap, what will I see in the spectrogram?

To answer your question in the context you have asked, you can look at it as follows:

You input signal is made up of two discrete-time sinusoids of equal length(5mins) $x_1[n]$ and $x_2[n]$. Supposing sampling rate such that 5mins correspond to $N$ samples and it is well above $400Hz$. So, your input signal will be of length $2N$.

Spectrogram will show the same effect: 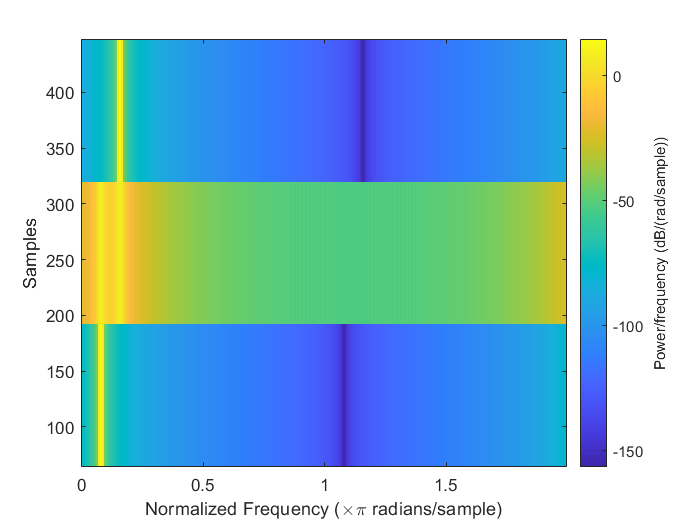 What you exactly you are going to see will depend a lot on the details and not only the overlap. What's your FFT size, what's your hop size, what's your window function, how do the sinusoids line up with the FFT frequency grid, how do changes in the signal line up with the individual frames and how the changes in frequency are actually implemented (i.e. what's continuous and what isn't).

Not the answer you're looking for? Browse other questions tagged fft frequency-spectrum homework spectrogram short-time-ft or ask your own question.

8
Time resolution of the Short Time Fourier Transform (STFT)
2
length of window and overlap rate in STFT
4
Filtering with STFT
0
How do I get the Time information after STFT?
0
Time position in STFT output
4
Understanding overlapping in STFT
1
What is the difference in between the different STFT implementations? (Overlap-shift with zero-padding, overlap-add, overlap-save, etc)
0
What's a good physical description of the following matlab code?