Does same data inserted to all antenna at beamforming?

I wonder do I understand beamforming right.

Does same data inserted to all antenna at beamforming? Like figure below? The only different is through different phase shift? If it is right how about Massive MIMO which use 64,128 antennas? The all 64, 128 antennas get same data?

Does concept of layer that I understand is right? Like figure below? I mean the two resource blocks transmitted at the same time and same frequency at same antenna? 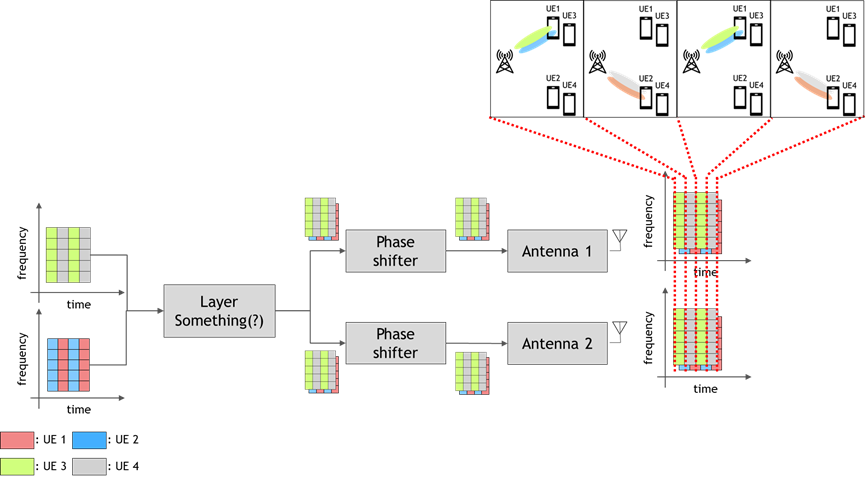 All the antennas might get the same data (besides some phase shift as you noted), but they don't have to. In your picture, you have a blue beam and an orange beam that toggle on and off over time. There is nothing stopping you from using a subset of the antenna elements for each beam and transmit both simultaneously. For example, a 64 element array might use 32 elements to form the blue beam, 32 elements to form the orange beam and then transmit both at the same time while carefully designing the beamforming weights to place nulls (blue beam should have a null in orange beam direction so that UE2 doesn't experience interference from the transmission intended for UE1).

The usual flat flading MIMO equation for a single symbol is:

where $\mathbf{W} \in \mathcal{C}^{N_T \times N_L}$ and $\tilde{\mathbf{x}} \in \mathcal{C}^{N_L \times 1}$. The matrix $\mathbf{W}$ is called the precoding matrix and does the mapping from layers to transmit antennas. This matrix will decide exactly what data goes on which antenna. As you say, the idea is that this spatially multiplexed data can then be transmitted on the same time/frequency element and it is the job of the receiver to demultiplex the data to get the original symbols intended for that UE back.

0
Beamforming techniques - pros and cons
0
Transmission frquency in MIMO-OFDM system
1
What is the difference between Antenna port and Physical Antenna in LTE?
0
How multi layer map to different beams in LTE Beamforming
0
When i have already found beamforming,do i still need to use MRC?i have some problems for them