How to implement an RF Mixer for chirp signal in python?

According to this link, all I need to do to mix two signals is to multiply them.

I have two chirp signals with same properties, one leading the other. If I multiply them to get the IF output, I don't get a constant frequency which is what I expect, I get double the frequency: 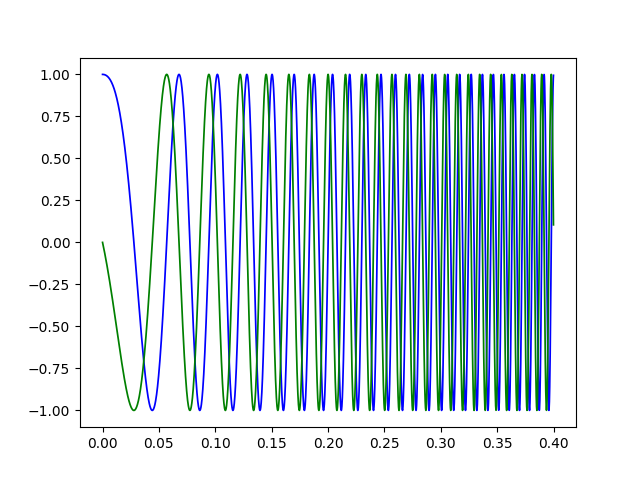 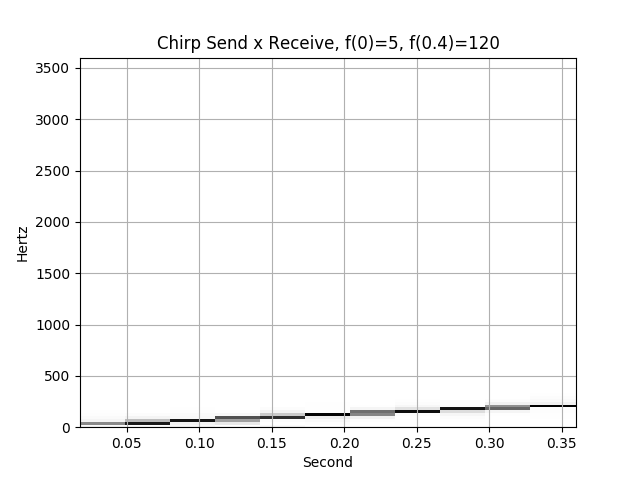 What you're seeing is correct. When mixing two chirps as you're doing, you will get a doubling of the frequency.

Consider two chirps with a bandwidth $B$ and pulse length $\tau$. We'll use the complex form to simplify the math

We introduced the arbitrary phase difference to be more general. Mixing this signals we get

We see that the chirp rate is now $2\beta/\tau$, so the resulting chirp will will change frequency twice as fast, and have a phase offset of $\phi$.

Resolving the return using a FMCW radar is a different story. In order to simulate it, you must introduce the target's delay. The mixing process is very similar, but with a slight tweak.

Let the chirped signal we transmit be

After reflecting from a target we receive the signal after some delay $t_d$, we have

This is simply a sinusoid at the beat frequency $f_b$. We can ignore the $\phi$ term since it will have no effect on our ability to resolve the target's range. Equating the the phase functions

So that then we have

Since we know our pulse travels at the speed of light $c$, we can rewrite the target's delay in terms of range $R$ and yield the mapping between target range and its beat frequency

Not the answer you're looking for? Browse other questions tagged python frequency chirp or ask your own question.