Is there any known math equation or other method to perform phase rotation on signal without decomposing it to frequency domain?

That's why I wonder if I can achieve it without decomposing signal to frequency domain?

To be clear I want to perform on the signal something like that:

But I don't know the frequencies in the signal. I just have time domain signal. Is that possible?

You can use the Hilbert transform, then multiply the real part with the sine of the angle you wish to transform, and the imaginary part wth the cosine. A quick code in Octave: 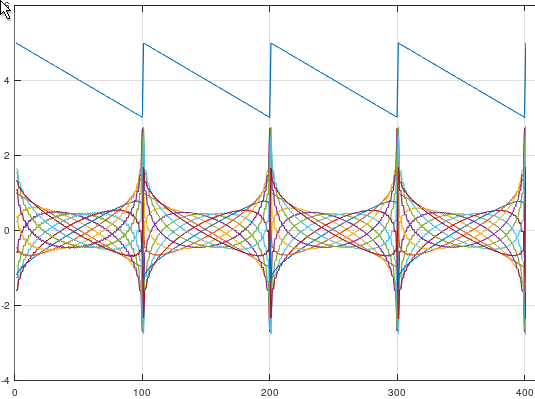 I know there are Hilbert transforms made with IIRs, but their phase is not exactly linear, so a FIR is a better, but costlier choice. Its order will be a function of the lowest frequency of interest, which will count as the transition width. If your bandwidth is large, the order will be large.

A FIR is a filter, which means it acts in time domain (but, implicitly, the frequency domain will be affected). To give an example, the signal you're showing of 1 Hz, sampled at 32 Hz, filtered with a FIR with a Kaiser window with As=60 and 1 Hz transition width:

The output isn't sampled because I am brute-adding the two inputs, but that's how the result would look like. The green number is the order. It's a symmetrical FIR so you'll need that many delays and half as many multipliers. You could try a polyphase approach and that will reduce the number of delays, but not the multipliers.

Not the answer you're looking for? Browse other questions tagged fourier-transform phase or ask your own question.