How to detect the presence one- and two-dimensional patterns in distributions of spatial points?

I have many point patterns, and I want to detect those patterns that have points arranged in lines that may be curved, intersected or broken. For example, on the following picture, the upper left pattern is not interesting but other three patterns are those that I want to detect. 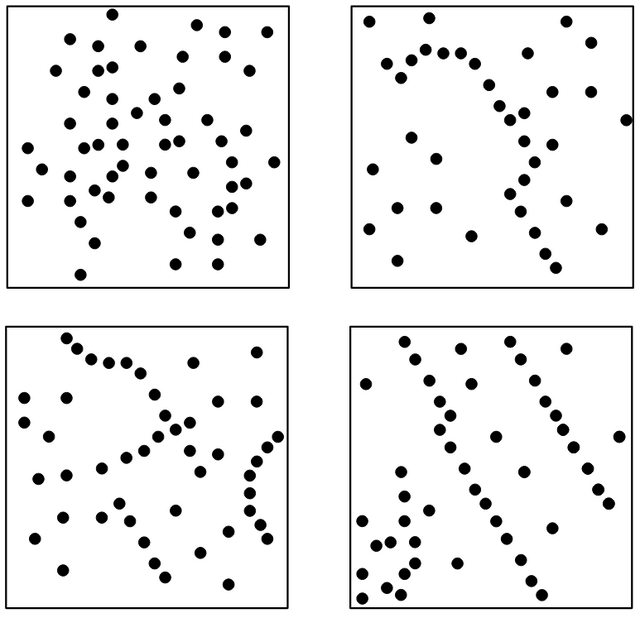 Not all points in the interesting patterns are aligned. Some points in those patterns are still random. The lines do not have any parametric form, so I cannot use the Hough transform. I searched some literature on spatial statistics, for example this one and only found metrics for assessing spatial uniformity and detecting clusters such as the index of dispersion. Which metrics exist for detecting the presence of not only clusters but curved lines?

I also need to do the same analysis for three-dimensional points. How to detect those 3D patterns that have points roughly arranged in lines and surfaces that can be wiggly?

Perhaps you could perform blob detection to find the individual dots and then map their location to a 2d space, that preserves their spatial structure, through the use of some measure for example the center of mass of the blob.

Once you have mapped each blob to its coordinates in the 2d space you could perform clustering or fit a regressor since the patterns somewhat resemble piecewise polynomials, you could model them as second or third degree polynomials, and build your algorithm upon RANSAC, it is a probabilistic algorithm that fits a model while discarding the outliers, you could also introduce some extra hyperparameters:

Another classic algorithm that can cluster points based on their geodesic structure rather than just the distance would be DBSCAN, choosing a suitable $\epsilon$ for your dataset as the points that belong to the pattern are rather close to each other. A more complex classical machine learning algorithm is ISOMAP, it can also cluster points that based on geodesic properties

Not the answer you're looking for? Browse other questions tagged detection pattern spatial or ask your own question.