Is this system causal or not?

My efforts of solving this question are below. 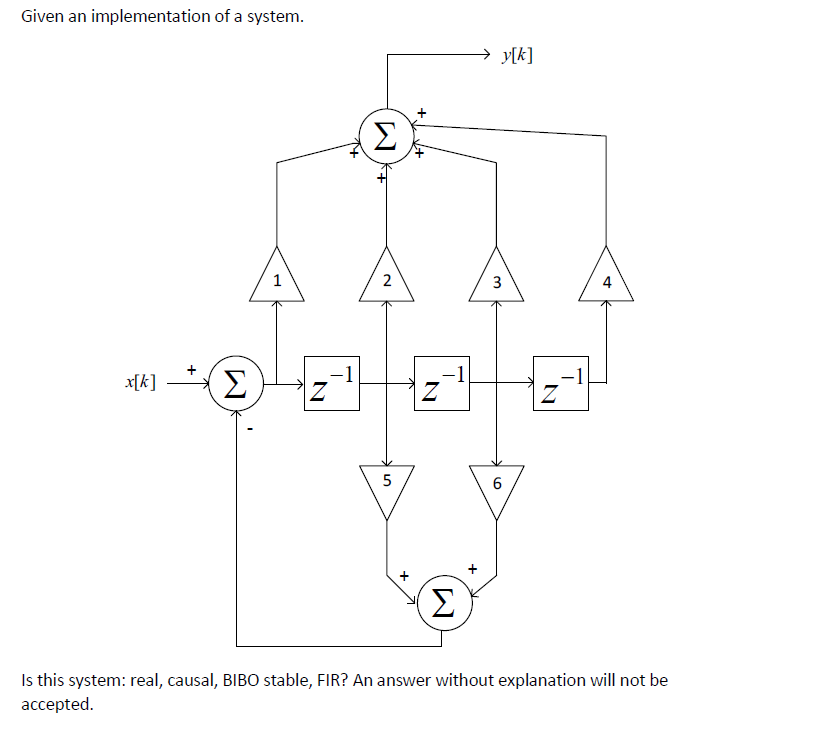 I came to a conclusion that this system is causal, since:

Where $w[n]$ is the output of the leftmost summation. After conducting Z transforms:

However, the answer key states the following:

Where have I made a mistake? Please, correct me if I'm wrong.

Note that in this case you can see that the system is causal only from the given implementation. It's important to understand that you can't see it from the difference equation (if no initial conditions are given), and in general you can't see it from the transfer function either (if no region of convergence is given). The only case for which the expression of the transfer function is sufficient to conclude that the corresponding system is non-causal is if the transfer function is not proper, i.e., if the degree of the numerator (as a function of $z$, not $z^{-1}$!) is greater than the degree of the denominator. Also take a look at this related answer.

Let's look at an example:

which can clearly describe a non-causal system if interpreted as "at time instant $n-1$, compute $y[n-1]$ from $y[n]$ and $x[n]$ according to the equation".

Purely by inspection of the block diagram the system is causal, because the output is the sum of the current input sample and stuff that's delayed -- there's no $z$ blocks in there to predict the future, just $z^{-1}$ block to react to the past.

Also by your method of finding the transfer function, the system is causal -- with a $3^{rd}$ order numerator and a $3^{rd}$ order denominator, it does have an immediate response, but it's not "reacting" to future events.

I believe that whoever made the exam key erred by calculating polynomials in $z^{-1}$, in which case the denominator order is, indeed, smaller than the numerator order, but then applying a rule that's only valid if the polynomials are in $z$.

(Note: some authors may want to define a strictly causal system as one whose output only depends on past values of the input -- that doesn't appear to be the case here; your exam key seems to be going by the correct rule, just misusing it).

The system is causal, provided that the recursion is forward; i.e., it's recursed for increasing $k$.

Seeing that you are confused about causality tests, let me elaborate on it.

Focusing on discrete-time systems, then we shall consider linear, nonlinear, time-varying, time-invariant, recursive, non-recursive systems while testing for causailty.

In general if nothing about the system is specified but just a formula for input-output computation (I/O relation) is given, then you can use the above definitions to test whether the system is causal or not.

In particular if a system is LTI (Linear Time-Invariant) you can use it's impulse response $h[n]$ to test whether it's causal or not; specifically:

Furthermore, for LTI systems, you can compute their system function $H(z)$, (Z-transform of impulse response) and test for causality as:

An LTI system with rational transfer function is causal if the ROC (region of convergence) of its system function H(z) extends outward from the largest pole, or is the entire Z-plane except possibly $z=0$.

Furthermore, since $H(z)$ of an LTI system uniquely specifies the corresponding LCCDE of the same system, therefore, in general for recursive systems, LCCDE alone is not sufficient to conclude for the causality of the corresponding system. You need additional information stated explicitly.

Finally, a block diagram can provide a pictorial definition for an LCCDE, and from a block diagram alone, for recursive systems, it's not possible to determine if it corresponds to a causal system or not, unless additional information is specified.

Note that if the system is non-recursive, (such as an FIR LTI) then you can directly determine causality based on the I/O relation, or $h[n]$, or $H(z)$, or the block diagram alone. For such non-recursive systems, you do not need additional information required for recursive systems.

Finally in your example, you are given a Direct-Form-II implementation of an LCDDE, and the additional information should be in the form of $n>0$ or $n<0$ to determine the causality fo the system that it corresponds to, however if it's not specified, then assuming $n>0$ is the more natural choice and your system will become causal then.

Not the answer you're looking for? Browse other questions tagged z-transform transfer-function homework poles-zeros causality or ask your own question.

4
Why does this transfer function has a second zero
1
Is the following system stable and causal?
3
Finite length truncated exponential sequence $\mathcal Z$-transform, zeros over circle explanation
0
Time-invariance, causality and stability of $h(t)$ of four given systems
0
How to conclude LTI, causality and BIBO stability of a system represented by a differential equation?
0
Using ROC to find stability of system in specific example
2
On the stability and causality of a discrete system
0
Output of LTI (in time and frequency $\omega$ domain) : when input goes through LPF
0
Complex damped exponential signal with repetitive poles and the significance of falling factorial