From what I've read, the spectral properties of the modulation largely depend on the rate of change of the signal phase - "a signal in which the phase changes stepwise has a broad spectrum, well beyond the allocated radio channel". I don't know if I understand this correctly.

An example of the spectrum of QPSK modulation with a random signal causing step changes in the output signal is shown in the figure below: 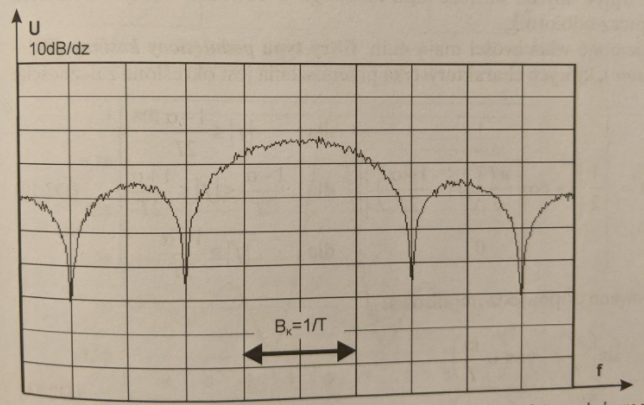 The book I am using says that "if we assume that the bandwidth of the radio channel allocated to this emission is $B_k = 1/T$, then a significant portion of the signal power (approximately a quarter) is emitted outside the bandwidth of that channel. The appearance of such strong interference in other radio channels is unacceptable (moreover - the band in which 99% of signal power is transmitted is approximately ten times wider than $B_k$)"

The spectrum is that of the base pulse used in the modulation, so in this case a rectangular pulse. A single rectangular pulse in time, as given by the Fourier Transform, is a Sinc in Frequency with the first nulls spaced at $1/T$ away from the center of the Sinc, where $T$ refers to the duration of the pulse in time. (Just as that shown by the OP). If the pulse is repeated at a consistent rate, then then only spectral components would be weighted impulses spaced by the repetition rate, and the weights would be the same Sinc function shape shown. Thus a 50% duty cycle square wave would have its even harmonics in the nulls of the Sinc function shown, resulting in the well known odd-harmonic spectrum of impulses. If the data is random, such that a patter never repeats, then the spectrum will be continuous as shown here.

Not the answer you're looking for? Browse other questions tagged phase bandwidth qpsk signal-power spread-spectrum or ask your own question.