What is "filter periodization"?

A library defines periodize_filter_fourier, which is an equi-spaced averaging formulated by

It's applied on the frequency-domain (DFT) Morlet wavelet. What's the purpose, and what's "periodizing" to do with it?

TL;DR The idea is to modify the continuous-time representation of the filter, $f(t)$, such that it's suitable for discrete-time sampling - mainly by accounting for aliasing via "folding" in Fourier domain. The operation is also equivalent to (and used for) subsampling.

"Periodization" refers to the fact that sampling $f(t)$ at uniform intervals $s$ corresponds to making its Fourier transform $2\pi/s$-periodic.

A uniform sampling of $f$ with interval $s$ can be expressed as a weighted Dirac sum:

That is, sampling $f$ at intervals $s$ is equivalent to making its Fourier transform $2\pi/s$-periodic by summing all its translations $\hat f (\omega - (2\pi / s)k)$. This makes more sense with what follows.

This happens to be a proof of the theorem. 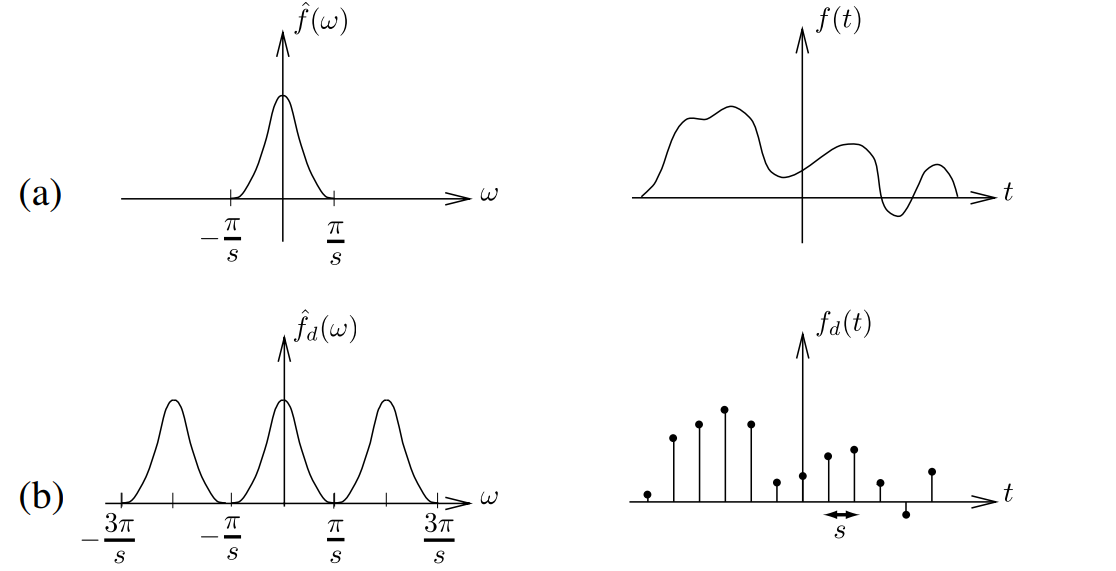 Let's pose it as a problem: what effect does subsampling (i.e. taking every $k$-th sample) of a finite sequence $x[n] = [4, 7, ..., -1]$ have on its Fourier transform? Note this is equivalent to scaling the sampling interval: $s \rightarrow ks$. Suppose we wish to subsample by 2.

To answer this, we first visit aliasing. 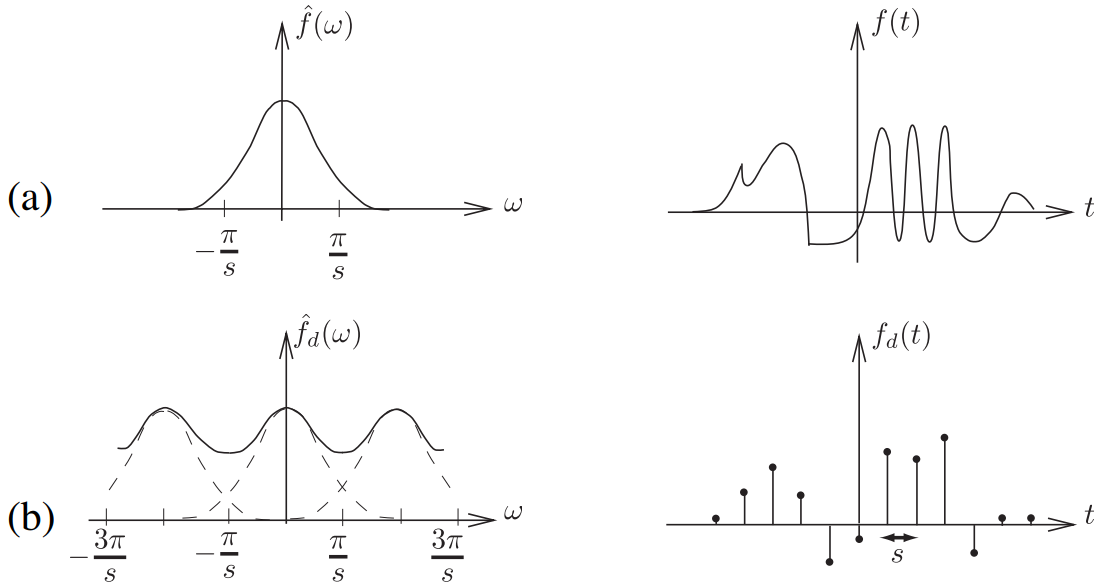 The translations are still spaced by $(2\pi / s)$, while support of $\hat f$ exceeds it, yielding overlaps. The sampled $f_d(t)$ will then no longer resemble $f(t)$: 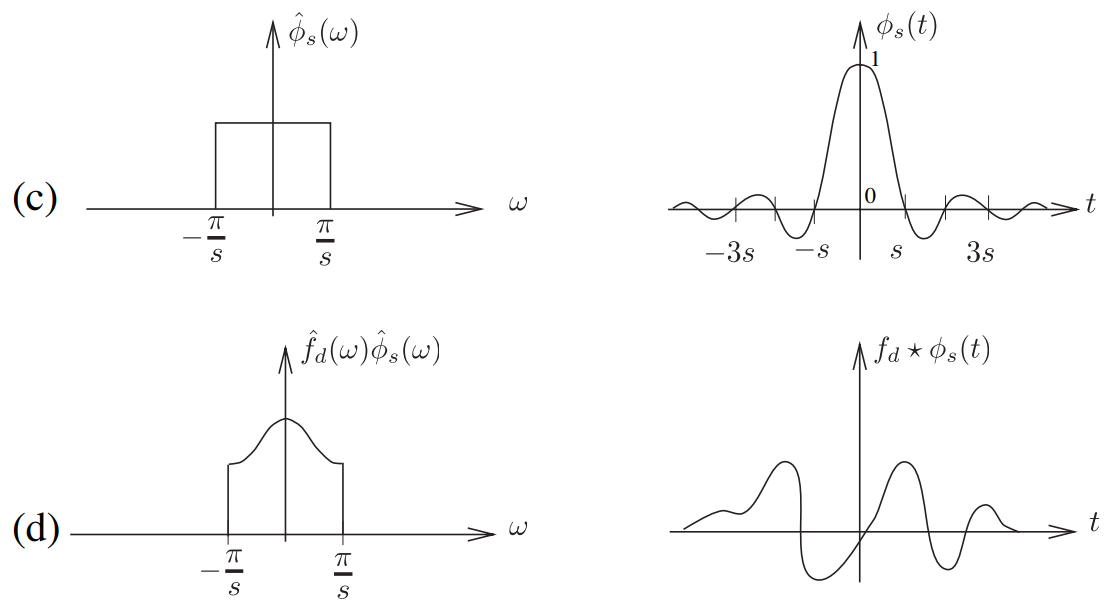 This is exactly what

(expression in question) is doing, but instead with DFT bins, where the de-facto support w.r.t. continuous-time input is $[-\pi/s, \pi/s]$ (with or without aliasing).

Does $(8)$ serve any purpose beyond subsampling? Correctness: if we disregard folding and pretend aliasing isn't there, result's even worse than with aliasing.

More generally, given some arbitrary continuous-time function of a filter in Fourier domain, $\hat \psi(\omega)$, how do we sample it such that the entire support (assuming finite) is included, and that we use exactly $N$ samples? One approach is, "sample lots, then subsample" - which is exactly what Kymatio's morlet_1d does. (The alternative is to determine correct sampling bounds and get it right the first time.)

Figures and formulae (with much accompanying wording copied verbatim) taken from S. Mallat's Wavelet Tour, sections 3.1.0-3.1.2, where further explanations and proofs are given (including to footnote 1).

The Dirac Comb is its own Fourier transform, as can be seen fairly directly from the identity relations above and is ultimately what generates the discretization formulae we're familiar with. It yields - as both corollary and generalization - the Poisson summation formula $$\sum_{k∈ℤ} f(x - k) = \sum_{n∈ℤ} \hat f(n) 1^{nx}.$$

This last formula, therefore, says that $\hat f(ν)$ is obtained by running $ν$ up or down by multiples of $1/Δt$, with appropriate adjustments in phase, until you get to whatever $ν'$ is as close to the domain $F$ as possible, or within it, and the result is $\widehat {f_F}(ν')$ if $ν'∈F$ or 0 otherwise.

Apparently, this can all be applied to undersampling as well, where $Ω Δt > 1$, except the sum in the $\widehat{f_F}(ν) ⇒ \hat f(ν)$ formula can yield two or more terms, rather than just 1 or 0. For tight sampling there is only one $ν'$ that lands in the interval $F$ ... except if it hits the boundary points $ν_±$. So, it's possible to fix that by adopting a convention, like $χ_F(ν_±) = ½$; and I think the technical formulation of the relevant theorems makes it mandatory.

Not the answer you're looking for? Browse other questions tagged filters discrete-signals dft periodic or ask your own question.

4
Fourier transform of modulus of sum of sines
4
Why to pad zeros at the middle of sequence instead at the end of the sequence?
4
Inverse DFT on the first half time domain
-2
DFT modulus property?
2
Sparse signal FFT
2
Which of the following sampling methods can be used to sample x(t) such that this signal can be uniquely recovered from its samples?
0
Sampling and Aliasing
0
Why are there copies of a signal in the frequency domain?
1
Multiplication term $ \frac{ 1}{T_s} $ in sampling theorem
0
Having Nyquist bin = aliasing?
See more linked questions

0
What is filter memory?
12
What kind of filter is that? Is it IIR?
0
How to determine the filter type of a discrete frequency spectrum
0
For linear IIR digital filter, what happens for negative frequencies?
0
What is special about the frequency $\omega_0=\pi$ that suddenly causes rate of oscillation decrease?
1
What is hidden in DFT below frequency resolution?
0
What should go to infinity in power's formula N or the repetition KN?
0
Transform lowpass filter to highpass filter, what happened to unit sample response and difference equation?
0
What is a "jump response" of a filter?