How is the Tx/Rx Gain calculated in USRP?

I know that USRPs are uncalibrated devices. In many exampls you can set the so called Tx or Rx gain (as in the picture below). 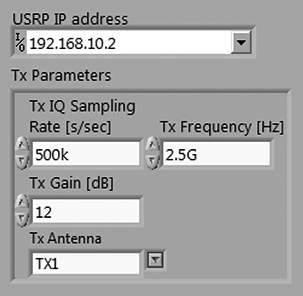 Now, I know that this does not correspond to the real power of the transmitter, nor is it a "gain" of the antenna - the most appropriate term here would be "transmitter channel gain", right?

So I would like to know how this transmitter channel gain process is implemented, how it is calculated, and how it works in practice (since a particular gain value doesn't correspond to a particular power level).

The term "gain" is pretty appropriate. It's a number describing the output power relative to some arbitrary base power.

So I would like to know how this transmitter channel gain process is implemented,

Depends on the USRP (or if you're using a modular model, on the daughterboard), but speaking generally: A mixture of selectable/bypassable amplifiers, variable gain amplifiers and adjustable attenuators.

how it is calculated,

Not calculated. Set by configuring the things mentioned above.

It sets how much stronger or weaker your amplification is. Simple! You add 3 dB of gain, you get twice as much output power. Of course, that's approximate, and only within the linear range of all the signal chain.

Not the answer you're looking for? Browse other questions tagged sdr signal-power channel usrp or ask your own question.