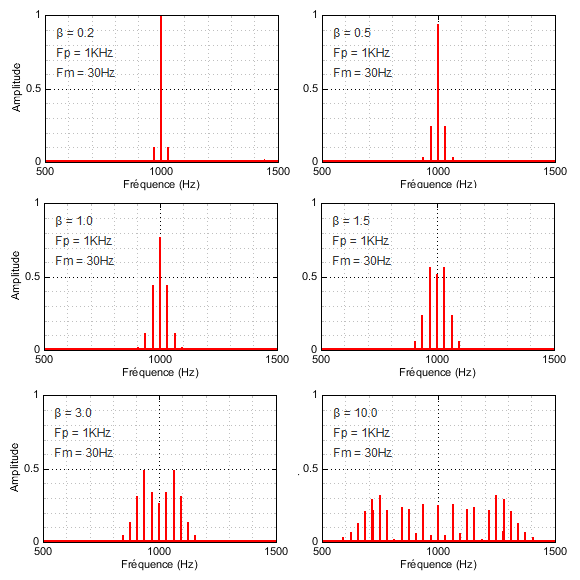 Now, what would be the spectrum of the carrier if it was modulated by a more complex signal like speech or music ?

Short term Fourier transform of the modulating signal would be :

In both case, modulating signal will have a more richer frequency content than a single sinusoid.

If a carrier is AM modulated by complex signal like speech, we find the spectrum of modulating signal shifted around the carrier (as seen in the spectrogram below) : what would happen with FM modulation for such rich signals ? 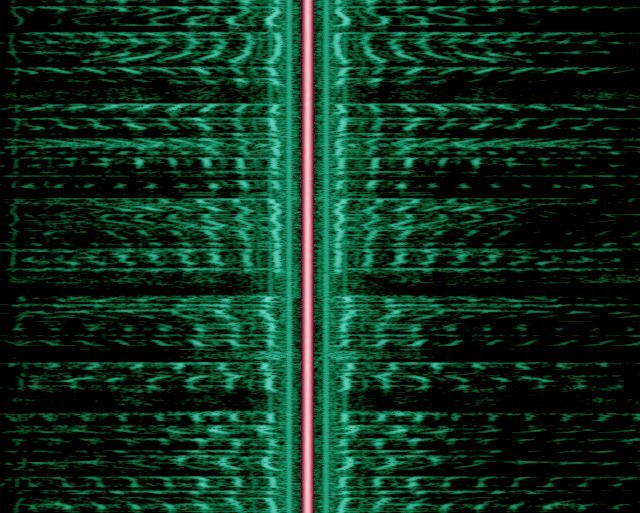 Because frequency modulation is a nonlinear phenomenon, there's no good general-purpose answer to your question. You can take any specific baseband signal and figure out its modulated spectrum, but that's it.

For lack of a better technical term, FM modulation takes the frequencies in the parent signal and munges them together, spreading them out by more than the deviation frequency. For a sine wave this is that Bessel function. For a pair of sine waves, it'd be all the harmonics of each sine wave plus all possible combinations of intermodulation ($n f_1 + m f_2\, \forall\, n, m \in \mathbb{Z}$) -- so for the two-sine case there may be some discernible, identifiable lines in the output. For sound with a continuous spectrum, you'll get a continuous spectrum out, but nothing you could just recognize on a spectrum analyzer.

For practical purposes, you're left with rules of thumb, inspired by the above results but limited by our inability to solve the nonlinear differential equations in any general way. If you have a signal with bandwidth $B$, and a maximum frequency deviation of $f_D$, then the bandwidth of the transmitted signal can be limited to $2(B + f_D)$. This isn't satisfying from a theoretical standpoint, but it's backed by over 70 years of practical experience with broadcast and voice communications systems.

Yes the signal would be grouped around the carrier just as in the simpler AM case: With AM we get two sidebands for every frequency tone in the modulated signal. For AM of a more complicated waveform, we can use the Fourier Series decomposition of that waveform to predict the average frequency spectrum as the superposition of each of the sideband pairs given by each Fourier single tone component.

FM is no different in this regard, there are just multiple sidebands (as $\beta$, or modulation index, is increased) for each tone. Each tone in the Fourier Series decomposition will produce a certain number of significant sidebands (as determined using Bessel functions based on the respective modulation index for each tone), and the resulting more complicated waveform will have an average frequency spectrum as the superposition of each of these tones.

The modulation index $\beta$ also happens to be the peak angle of the equivalent phase modulation that occurs and I find it very insightful to use complex phasor diagrams to show the equivalence of AM and FM for the case of a single pair of sidebands (small angle or $\beta$ referred to as "narrowband FM"). This also directly shows why the additional sidebands are needed, since with only two sidebands, as the level of the sidebands increase we would induce both AM and FM if we were restricted to not have additional sidebands.

This detail is demonstrated below with the AM case as a large carrier and one small pair of sidebands, with the rotating phasors in time representing the higher frequency side and (phasor rotating counter-clockwise relative to the carrier) and lower frequency sidebands (phasor rotating clockwise), which when all summed together will stay on the real axis with only the amplitude of the result going up and down (amplitude modulation!). But if the same phasors are changed to sum in quadrature with the carrier as in the FM case for very small angles we can similarly predict the sideband level and frequency using the same vector diagram, where the two vectors would add to a peak angle $\beta$ while minimally changing the amplitude, and each sideband level is $\beta/2$ relative to the carrier given $\sin(\beta) \approx \beta$ for small angles. (Also for clarity, in the FM case the sidebands shown are directly proportional to the peak phase of the underlying phase modulation (PM), so our observation of that diagram with time is showing the resulting PM and if we took the derivative of that phase versus time we would directly see the underlying FM of that same waveform.) 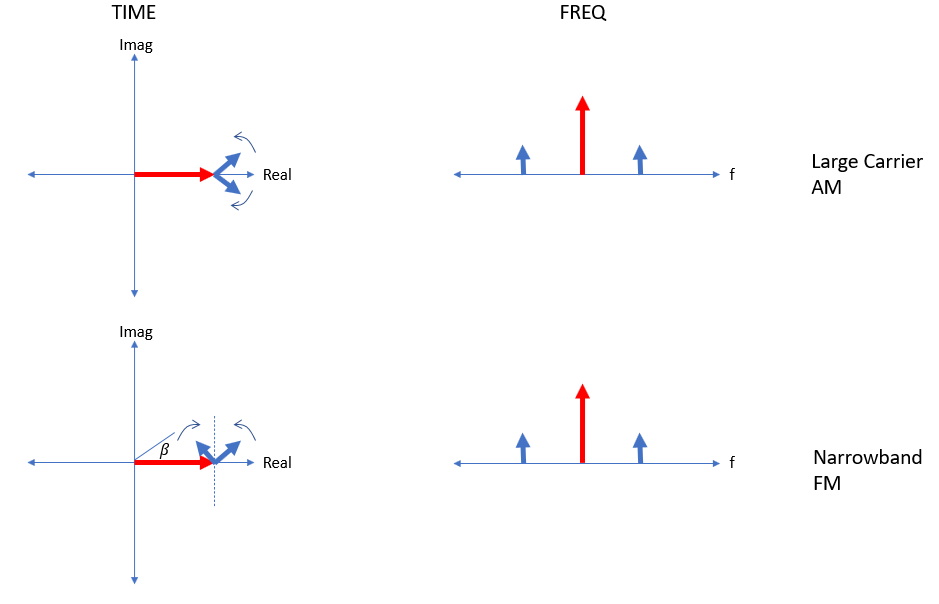 The spectrums shown above are the magnitude spectrums which would be identical for the two cases (the phase for each, not shown, is what would be different). But here is the observation with this which removes all mystery of the requirement for multiple sidebands for FM in general as predicted by Bessel functions. Note that if we increased the sideband level (by increasing $\beta$) in the above diagrams, if we restricted the spectrum to only have one single pair of sidebands, the resulting signal MUST have both AM and FM components in the FM implementation: the single sideband case would sum to be in quadrature with the carrier, which would deviate for large angles from the circular path that would maintain a constant amplitude (no AM components). The additional significant sidebands as predicted by use of Bessel functions for large angles, are exactly what is needed to provide a summation that stays on the constant amplitude trajectory and results in an FM waveform with no incidental AM components!

Not the answer you're looking for? Browse other questions tagged spectrogram frequency-modulation or ask your own question.

8
Synchrosqueezing Wavelet Transform explanation?
4
How to demodulate PM with signal faster than carrier?