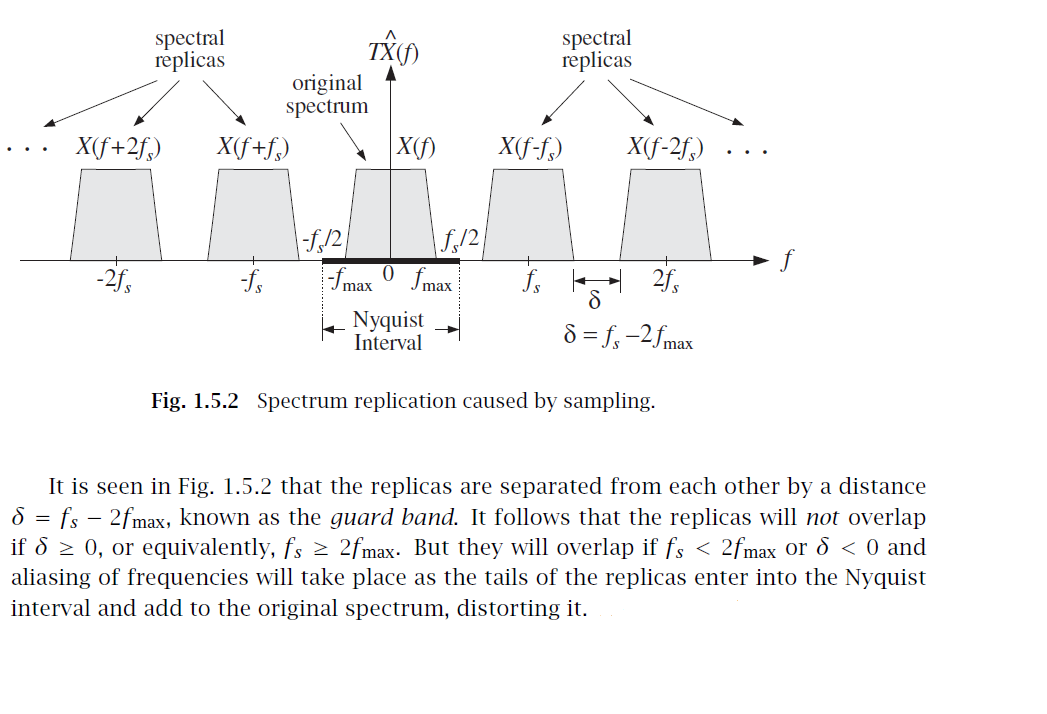 Which one of the following is the condition of aliasing?

There really is no practical difference between the two. The important thing to understand about aliasing is not the exact definition of the word, but rather the concept: when two frequency bands alias and there is a signal in one of these bands, after sampling you can't tell which band the signal came from. In a sense, by the time you're asking what is or isn't aliasing, it's already too late.

Consider this: you have a digital audio recording of perfect silence. However, somewhere during the recording process some RF-interference was mixed in. So the recording of silence now contains some aliased RF-noise, which isn't added to any existing spectrum, because there is none. After all the recording is silence, even though clearly the speaker cone is moving. Maybe the lack of spectrum was actually a feature of the spectrum?

If you understand the concept of aliasing, then it is almost always clear from the context what the exact definition in that particular context happens to be.

I want to clarify further that what the text is really trying to say is simply if you violate the sampling condition, then the bands will alias and if the bands alias, then the signals can alias as well (but when they do, you really can't tell; at that point it's too late).

You seem to get hung up on that "distinction" whether or not there is overlap. This is actually irrelevant for the definition of aliasing, as correctly pointed out in myzz's answer. As explained in my answer to your previous question, aliasing means that frequencies are shifted to some place where they were not before the sampling process. This is called aliasing.

That text snippet in your question does not say that it is important for the definition of aliasing that there actually occurs overlap. It just says that - for the chosen spectrum - there will be overlap if there's aliasing, simply because they chose a signal with a spectrum that basically extends from DC to its maximum frequency.

In practice you always get some spectral overlap due to aliasing, if only due to noise. In the classic textbook example where a single noiseless sinusoid with frequency $f_0>f_s/2$ is shifted due to aliasing, you don't get any overlap, yet you have aliasing.

Not the answer you're looking for? Browse other questions tagged sampling aliasing analog-to-digital or ask your own question.

3
Illustration of time domain aliasing cancellation (TDAC, MDCT, lapped transform)
6
Difference between Nyquist rate and Nyquist frequency?
0
Is this a kind of aliasing error and how to make correction?
4
What's the impact of aliasing in the time domain?
2
Understanding the Conditions for Recovering a Discrete Time Signal Through Sampling
2
Designing an experiment to show blue noise not adding noise below nyquist and not aliasing above
0
Higher order harmonics during sampling
0
Aliasing correspondance with respect to DFT
0
Aliasing at $f_0 + kf_s$