Discussing the relationship between the Fourier transform and the Hilbert transform, let us consider an example function. It can be any square integrable function; for readability of the text, we select a function with both transforms expressible via simple analytical functions.

A_s is a function of time, and atan(Imag(A_s),Real(A_s)) is also the function of time. It is the instantaneous phase of an analytic signal, and it is not the phase of the Fourier transform frequency component, not in any way.

For s(t) = sinc(t), the Fourier transform (OP's FT_s) values is a real constant up to a frequency of 1/(2π) and a zero for higher frequencies. Therefore, the array of phases of frequency components (OP's phaseFourier) is zero up to 1/(2π) and undefined in the region where the Fourier transform amplitude is zero. For sinc(t), one can safely assign all phases of FT components to zero in the entire frequency domain. The FT_s graph is trivial, and shown in every textbook and course notes on signal processing.

The instantaneous phase (OP's phaseAnalytic) graph may be shown less frequently, so here you are: 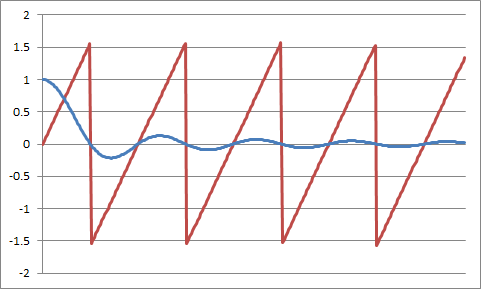 Not the answer you're looking for? Browse other questions tagged fourier-transform hilbert-transform or ask your own question.

5
Hilbert transform: analytic signal
0
The error between the theoretical value and the simulation value of imaginary part of the FFT results
4
Relation between Laplace and Fourier transforms
6
Relationship between the Real and Imaginary parts of a LTI causal system
2
Hilbert transform from analytic signal
0
inverse fourier transform of magnitude and phase
1
Terminology for instantaneous phase of magnitude component of complex signal
2
Magnitude of the analytic signal
2
Analytic Signal Block in Simulink Gives Reduced Amplitude for the Imaginary Part