But how would one actually code this? Continuous math can't just be ported directly; the following considerations arise:

The key is units, and understanding wavelet behavior in context of application (in this case CWT). Full implementations for all discussed here is available at squeezepy.

This answer assumes analytic wavelets as per the question ($\hat \psi (\omega \leq 0) = 0$), but all ideas apply to general time-frequency atoms (e.g. windows for STFT) with some code adjustments.

Firstly, note we're computing a "width", which is inversely-related to "resolution". The width is the standard deviation of the time-domain wavelet. Standard deviation is well-defined for normally-distributed data, and has desirable properties if data is a probability distribution.

By squaring modulus of $\psi(t)$ and normalizing it to integrate to 1, we interpret the result as a probability distribution, and define the time variance:

The purpose of the denominator is to enforce validity as probability distribution, i.e. normalizing $\psi$ if we haven't already. This is valuable for coding the integral, as the wavelet at different scales may not integrate to $1$ automatically. It also reminds us of the probabilistic context rooting $\sigma_t$. Mind that $\sigma_t$ is half the said span, as we compute the uni-lateral ('radius') variance.

The question is, how to define $t$? We can't take infinity, and even if we could, what finite width would span the non-decayed wavelet? Answer to latter is rooted in how DFT works, discussed in "Are we right?" below, but there's an extra concern: should t be zero-mean? No; it should be defined such that it aligns with the wavelet as if it were inputs to generate the wavelet.

Most wavelets will peak at $t=0$, for which t=0 should align with wavelet's peak (i.e. same array index), negative to left, positive to right. Such t will be nearly zero-mean, but not exactly, and requires different handling for even- and odd-length t.

Much of what's said for $\sigma_t$ also holds here; we define the frequency variance as

where $\tilde\omega_\psi$ is the energy center frequency (see "Center Frequency"). We thus interpret it as frequency-span of ~68% of wavelet's spectral energy. In CWT filter bank terms, a small $\sigma_\omega$ for a given scale means that most of input signal's frequencies will be band-passed about $\tilde\omega_\psi$, and the rest attenuated/rejected.

To cut it short, I had to 'cheat' to find the proper range for $t$. I started assuming $\omega_\psi$ to be correct since it made sense and correctly gave center frequency as the exact location of the mode=peak. For $\sigma_t$ I ranged $t\in [-.5, .5)$, as that's interpreted as fraction of frame's length. $\sigma_t \sigma_\omega$, however, did not multiply to $0.5$.

The units of $\sigma_\omega$ are samples per cycle. Then, to cancel in Heisenberg's relation, $\sigma_t$ must have the reciprocal units: cycles per sample. This is unified by below relation for DFT:

which can also be used to obtain resolutions in physical units (Hertz, seconds, etc).

Above is also a bit simplified; the full units are:

Radians in $(5b)$ are mandated by those in $(5a)$ to cancel in product to yield unitless Heisenberg area. They're also sensibly interpreted once considering the nondimensional variants.

#2 is key to #1. Recall in CWT with freq-domain wavelets, we do a form of discretized convolution theorem, getting sort of the exact continuous-time result, then discretizing. An imperfect time-domain wavelet is characterized by not fitting in the frame - but what if the frequency-domain wavelet fits just fine?

Now the time-domain wavelet fares fine, while freq-domain is clearly troubled: half (or more) of it is entirely missing! We have the "trimmed bell" problem, contrary to "insufficiently sampled bell" for high scale case. The center frequency distinction becomes critical here; peak will always equal $\pi$, while energy will lie to its left. Investigating the behavior of the $\sigma_\omega$ integral, I found the energy variant to yield stabler and at times more sensible results, but depending on application, peak can also be used (with due re-interpreting of $\sigma_\omega$).

Doing everything right above, one can take the Morlet wavelet and vary its mu only to notice that time and frequency resolutions don't change! What's the deal?

Non-dimensional measures change with wavelet parameters, but not with scales, so each has its own use and interpretation.

Mallat's equations divide by $2\pi$, we don't, but there's no contradiction: this is per Parseval-Plancherel's theorem relating time-domain and frequency-domain energies. Since we explicitly divide by said energies in $(1)$ and $(2)$, the $2\pi$ is automatically accounted for.

Not everything was explained here, nor can be in a single post. ssqueezepy contains a complete implementation, with accompanying tests that provide further explanation - particularly on handling scale extrema, which is a whole topic of its own.

We can visualize said resolutions with ssqueezepy. Let us compare the Morlet wavelet for mu=5 vs mu=20 parameters. For reference, I also recommend this Desmos. All plots below (unless otherwise shown) via: 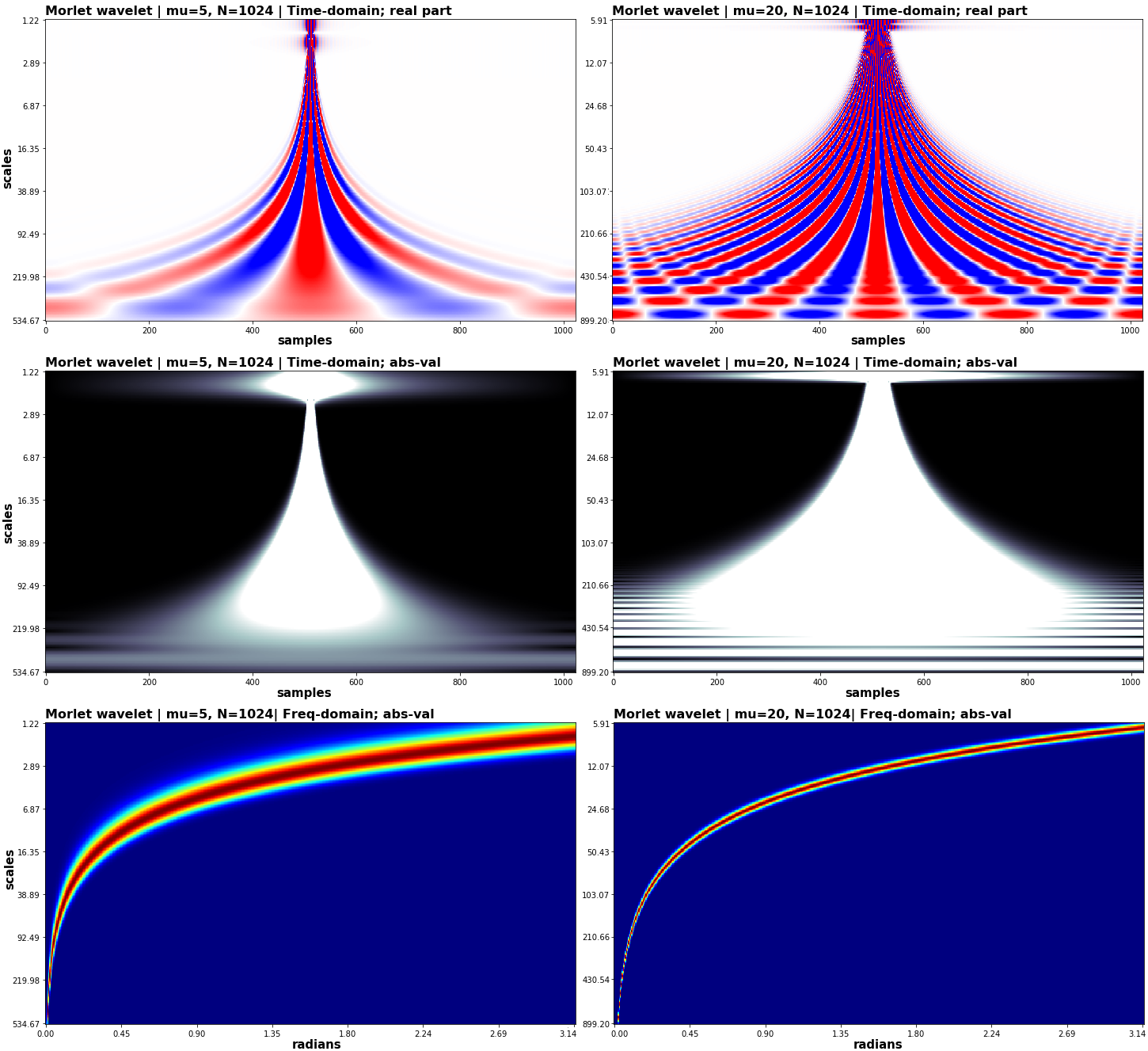 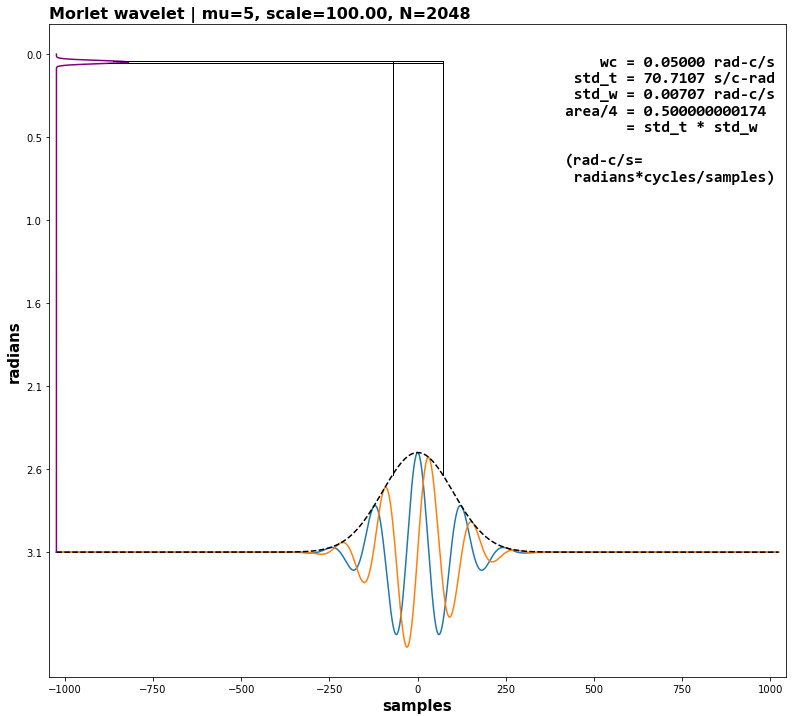 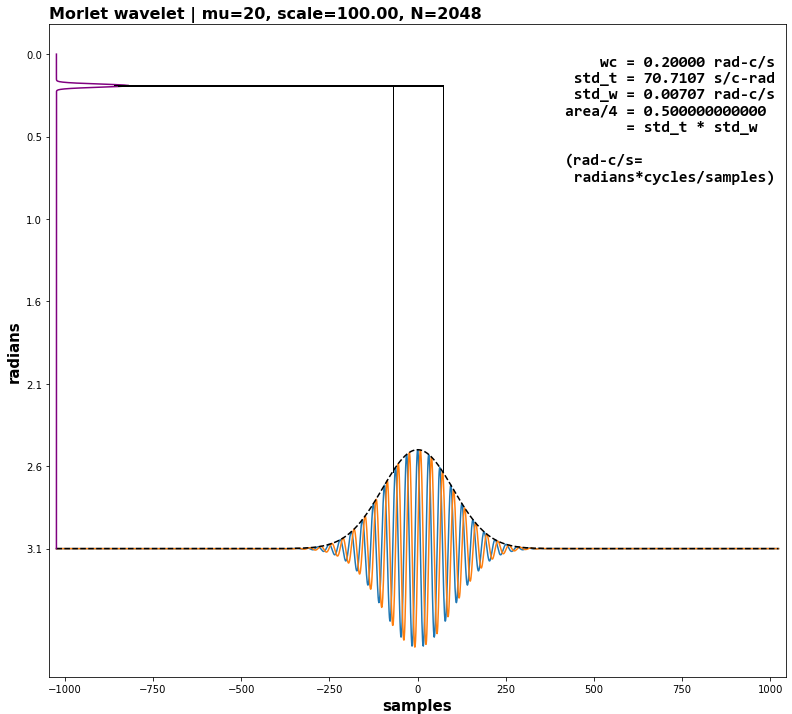 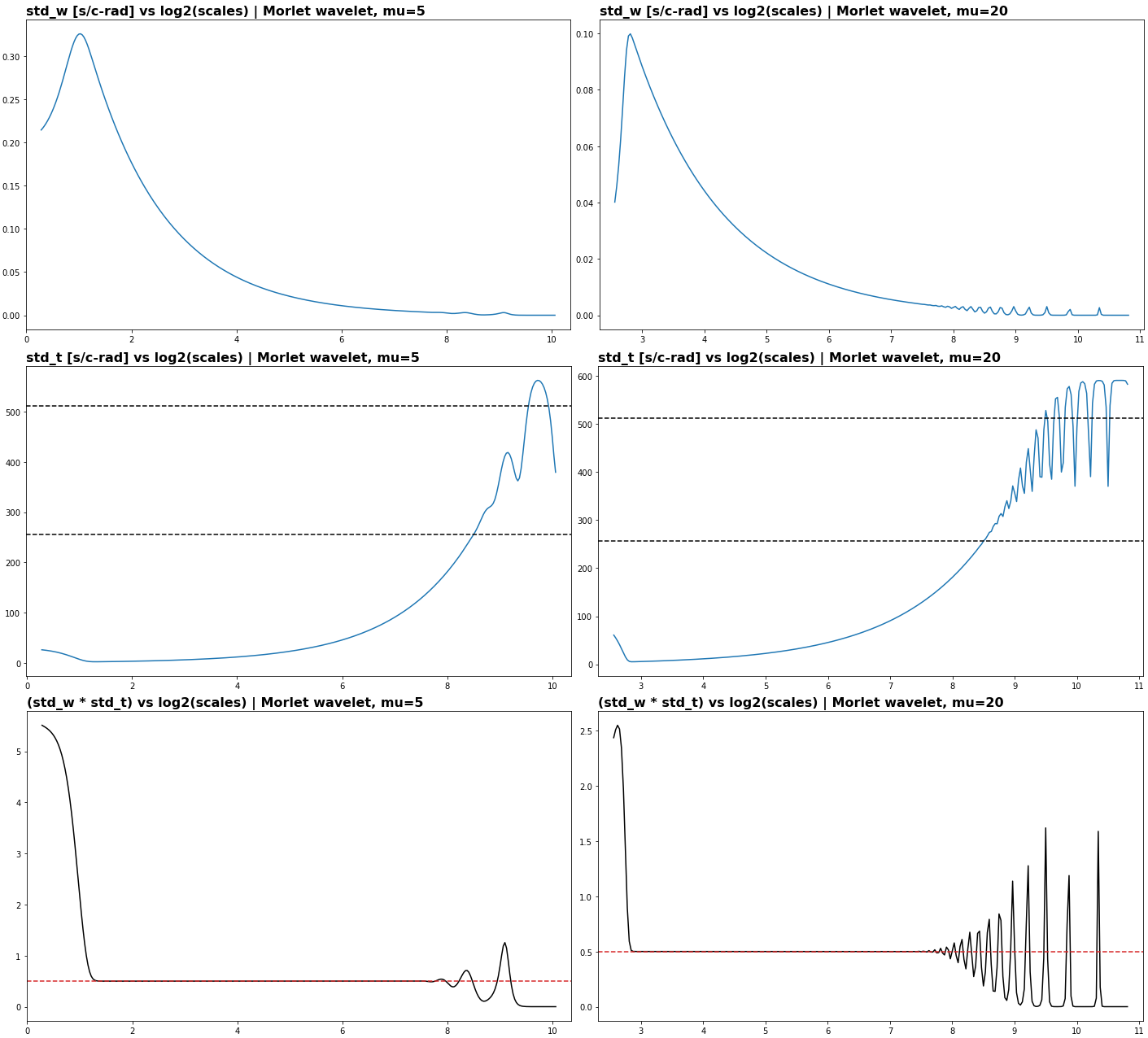 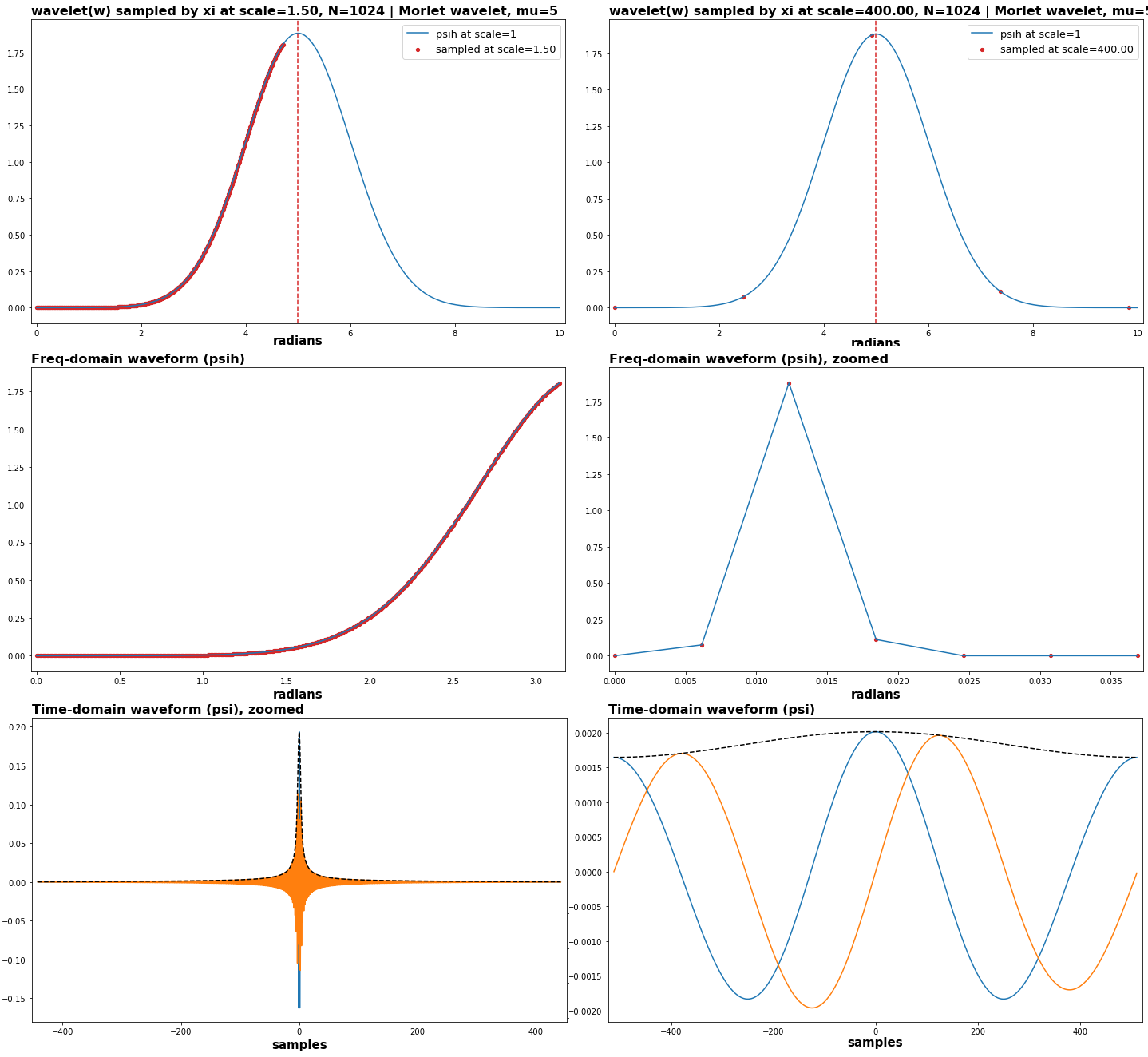 Not the answer you're looking for? Browse other questions tagged fourier-transform dft wavelet time-frequency cwt or ask your own question.

5
Question on understanding the time-bandwidth of a signal
3
Why is CWT implemented with FFT convolution?
1
How is wavelet center frequency computed?
0
Time support for wavelets in scattering transform
1
Understanding the units of wavelet time & frequency resolution
1
Nyquist Frequency and Window Length

2
Multidimensionnal wavelet admissibility criteria
6
Haar series approximation of a function?
8
Convolution of Signal with a Wavelet
2
Wavelet transform: How to compute the initial coefficients when only samples are available?
5
How to Map CWT to Synchrosqueezed wavelet transform?
2
Biorthogonal Wavelet Expansion
5
How to implement a filter associated to a specific wavelet
1
Inverse Continuous Wavelet Transform derivation?
1
Understanding the units of wavelet time & frequency resolution