Find Magnitude of a DFT signal using a Blackman window 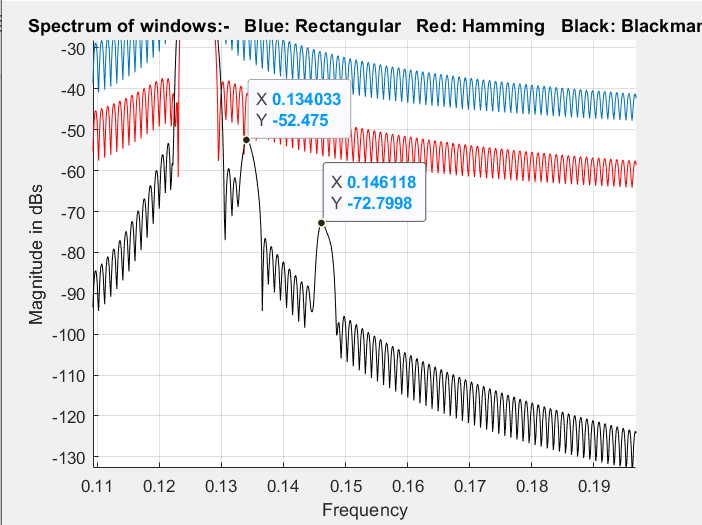 Hi I've been given a signal made of a series of cosines. I have taken the DFT of the signal using a rectangular window (blue), hamming window (red) and a Blackman window (black). I have identified two of the cosine components of the signal. I was wondering how can I use the dB magnitude to find the actual magnitude of the frequency. This is so that i can recreate the signal by summing all of the cosines found.

I was also wondering why these frequencies can be seen on the blackman window but not the other 2 windows?

any help would be greatly appreciated!

First of all, this is a (y-axis) logarithmic plot, so the plotted magnitudes are given by :

And the linear amplitude is found by inverting it :

There will also be an amplitude scale due to DFT length and the window type, which you can determine by a calibration procedure (if not with a formula). You can also find the formula, or just approximate it.

Coming to the reason why Blackman window was able to show the side-by components of lower amplitudes: among other windows there, Blackman window has the largest main-lobe-width, but the smallest side-lope-peaks; i.e., fast decaying tails.

Large main lobe width, means low frequency resolution : if you have two sine waves very close in frequency together, then they will look like a single component instead of two. Hence spectral resolution (discrimination of two close components of similar amplitude) is reduced.

Small side lobe peaks (or fast decaying tails), means reduced leakage: When there's a mixture of large and small amplitude sinewaves (at arbitrary frequencies) in the signal, then the spectrum of the largest amplitude signal will shadow the spectrum of the remanining smaller amplitude components, especially when they are closer to the main component. All those components falling below the (modulated) window's tail magnitude will be invisible. Hence a window type with small tail magnitude (fast decaying tais) will have less shadow on the remaning spectrum. The effect is more pronounced as you get closer to the main lobe of the largest components (as the tail amplitude will be larger around the main lobe).

Not the answer you're looking for? Browse other questions tagged matlab signal-analysis dft window-functions or ask your own question.